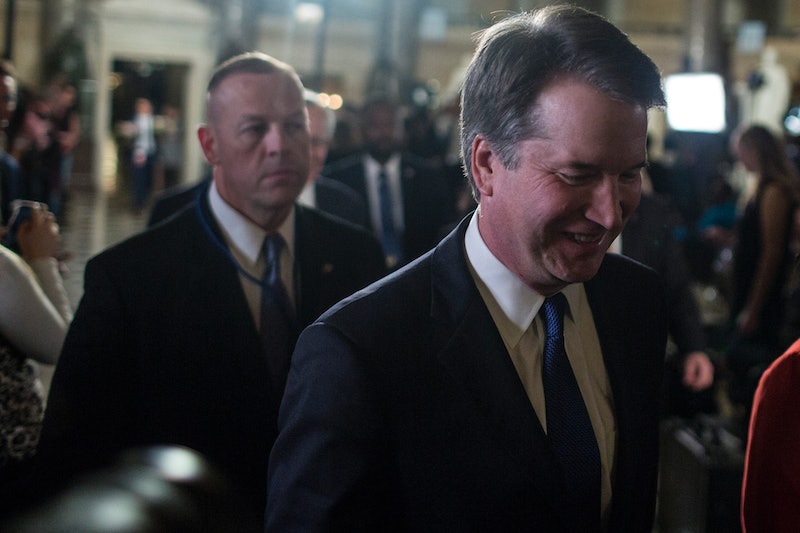 On Monday, the Supreme Court declined to hear a case, allowing the New Jersey Supreme Court to uphold its opinion that a county in the state is not required to use taxpayer funds to help preserve religious buildings. In an opinion filed on Monday, Brett Kavanaugh said the religious liberty case SCOTUS passed on does have to be addressed at some point in the future. His argument was simple: that refusing to offer taxpayer funds for the maintenance of certain religious institutions, like religious schools and historical sites, is a form of discrimination — and that he'd like SCOTUS to hear a similar case in the future.

According to NPR, the Supreme Court passed on the case largely because the facts related to the ruling seemed too vague and unclear — a point that Kavanaugh agreed upon. In his opinion, Kavanaugh wrote,

In my view, the decision of the New Jersey Supreme Court is in serious tension with this Court’s religious equality precedents. As this Court has repeatedly held, governmental discrimination against religion—in particular, discrimination against religious persons, religious organizations, and religious speech—violates the Free Exercise Clause and the Equal Protection Clause. In the words of Justice Brennan, the “government may not use religion as a basis of classification for the imposition of duties, penalties, privileges or benefits."

Kavanaugh pointed out that he did agree with SCOTUS' decision to pass on hearing this case, due to the facts of the case being "not entirely clear." But he continued, "At some point, this Court will need to decide whether governments that distribute historic preservation funds may deny funds to religious organizations simply because the organizations are religious."

The newest Supreme Court justice concluded, "In my view, prohibiting historic preservation grants to religious organizations simply because the organizations are religious would raise serious questions under this Court’s precedents and the Constitution’s fundamental guarantee of equality." One of the examples the justice used in his opinion was that if a preschool being run out of a church basement was denied the same funds other schools were, then that would be religious discrimination.

Some may worry this is the beginning of an effort to entirely undermine the separation of church and state in the nation, as is noticed in this Slate article. As the publication points out, the First Amendment's Establishment Clause specifically addresses the need for a separation between church and state under the eyes of the law. It reads, "Congress shall make no law respecting an establishment of religion, or prohibiting the free exercise thereof." Still, Kavanaugh did vote in favor of bypassing this ruling, for now, which certainly indicates he agrees with his fellow justices, in at least one way.

Though Kavanaugh has kept a low profile in his months as a newfound Supreme Court justice, he was recently seen at a basketball game for the Washington Catholic Athletic Conference championship games on Feb. 26. Per The Washington Post, he watched both of the high school championship games before leaving halfway through the second game.