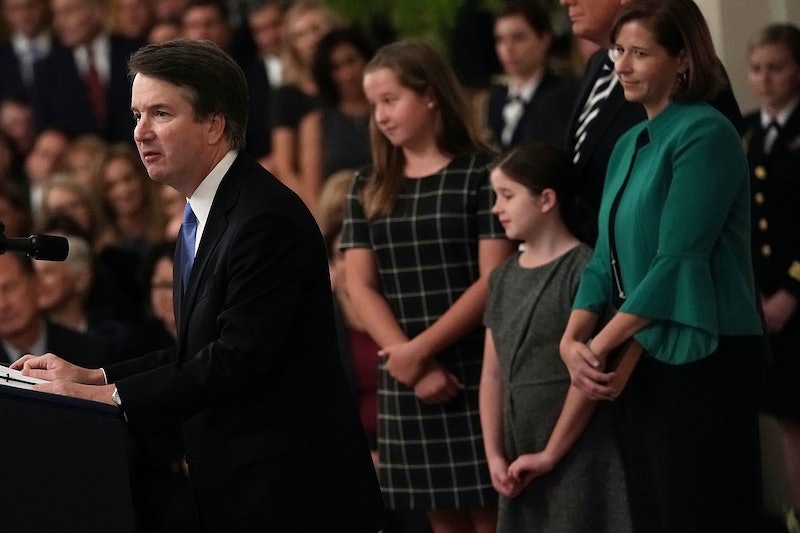 On Monday, President Trump held a ceremonial swearing-in for Brett Kavanaugh, the newest member of the United States Supreme Court. At this ceremony, Kavanaugh gave a brief speech during which he struck a rather conciliatory tone, promising to be a "team player" as the newest SCOTUS justice. Kavanaugh's remarks on Monday stood in contrast to his testimony at his confirmation hearing last month, in which he accused Democrats of orchestrating a "political hit" against him.

Kavanaugh was appointed to the Supreme Court after a highly contentious Senate confirmation process. The Senate affirmed his nomination on Saturday with a final vote of 50-48. As CBS News reported, the newest SCOTUS justice was then officially sworn in that same day at the Supreme Court by Chief Justice John Roberts and Justice Anthony Kennedy. Kavanaugh will replace the retiring Justice Kennedy on the bench.

On Monday, President Trump held a follow-up ceremonial swearing-in in front of an audience in the East Room of the White House. Trump offered brief remarks at the ceremony and Kavanaugh followed up with a speech of his own. Kavanaugh opened his speech by emphatically asserting that the Supreme Court is not a political institution — and that he will always work in collaboration with the other justices.

As Kavanaugh described (as reported by the Chicago Sun Times):

The outlet also noted that Kavanaugh briefly reflected on the Senate confirmation process during his remarks to note that he hopes to move beyond the contention that characterized it. "The Senate confirmation process was contentious and emotional. That process is over. My focus now is to be the best Justice I can be. I take this office with gratitude and no bitterness," he said.

The rather apolitical tone of Kavanaugh's remarks on Monday appeared quite different from the nature of the testimony he delivered during his hearing on Sept. 27. As MSNBC reported, in this testimony, Kavanaugh directly called out Democrats for what he perceived as their negative treatment of him during his confirmation hearings, saying in a heated speech:

This whole two-week effort has been a calculated and orchestrated political hit, fueled with apparent pent-up anger about President Trump and the 2016 election, fear that has been unfairly stoked about my judicial record, revenge on behalf of the Clintons, and millions of dollars in money from outside left-wing opposition groups. This is a circus. ... This grotesque and coordinated character assassination will dissuade confident and good people of all political persuasions from serving our country.

In addition to insisting on the importance of teamwork during his speech on Monday, Kavanaugh also addressed several other topics. The newest SCOTUS justice heavily praised outgoing Justice Kennedy, indicating that he is "humbled and proud" to sit in Kennedy's seat. He also thanked a host of Senate Republicans who were instrumental in securing his confirmation. Finally, he spent some of the remainder of his speech asserting that he has always respected and promoted women in his personal and professional lives.

Overall, Kavanaugh's most recent speech struck a very different chord than did his remarks during his Senate testimony. Time will tell if Kavanaugh remains true to the "team player" mentality he espoused during Monday's ceremonial swearing-in.