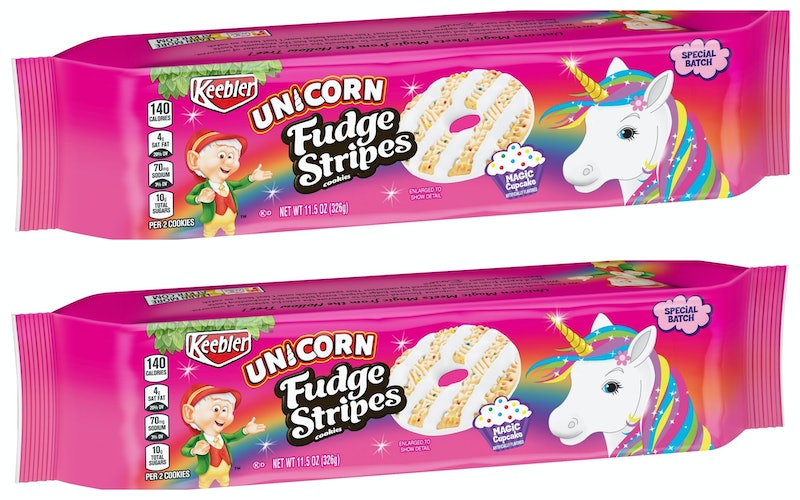 It may be 2019 now, but hey, guess what? The unicorn trend, which has been ongoing for at least two years now, is still chugging along — and the latest entry to the food-related subset of the trend has just arrived: There’s now a Unicorn version of Keebler Fudge Shoppe’s Fudge Stripe cookies. Fudge Stripes — those circular shortbread cookies drizzled with chocolate that seem to be literally everywhere, all the time — have been around since at least the 1980s; originally a part of the E.L. Fudge line, they were later transferred into the Fudge Shoppe collection, where they’ve continued to have a long and happy life. Here, they’ve seen a number of limited-edition flavors over the years — but honestly, Keebler might finally have outdone themselves with the Unicorn variety. Because, I mean… Elves. Unicorns. That’s just too much magic for one Hollow Tree to hold.

Indeed, the full name of the treat is, uh, A Lot: Officially, they’re called Keebler Unicorn Fudge Stripes Magic Cupcake Cookies. Most of that moniker makes perfect sense — the brand is Keebler, the variety of cookie is Fudge Stripes, and the specific theme of these particular Fudge Stripes cookies is Unicorn — but I’ll admit to being a bit confused about the whole “Magic Cupcake” bit.

Its placement on the packaging suggests that it’s the actual flavor, which means that Keebler has artfully managed to sidestep the question I always have aboutt “unicorn-flavored” food: What the heck does a unicorn taste like? (Also, wow, that’s a morbid idea when you really think about it). But what’s the difference between “Magic Cupcake” flavor and, say, the more common birthday cake flavor? Is “Magic Cupcake” Keebler’s way of saying “Funfetti” without actually saying Funfetti, since "Funfettti" is Pillsbury's thing?

Signs point to a tentative “yes” — the cookies are described in the product copy on Walmart’s website as “shortbread with vanilla cupcake-flavored stripes,” with Instagrammer Snack Food Mafia noting that they also have “sprinkles built in the cookie.” And, indeed, if you look closely at the packaging, the cookies do appear to dotted with rainbow sprinkles.

It's unclear exactly what the Unicorn Fudge Stripes cookies taste like; I haven’t been able to find any detailed reviews (yet!), so we can only make a few vague, vanilla cake-tinged guesses. For what it’s worth, though, I think it’s possible they might taste a bit like the Birthday Cake Fudge Stripes cookies do — another special Fudge Stripes variety to which the Unicorn cookies bear a certain resemblance. Reviews on Walmart’s website and Amazon describe them as a bit on the sweet side, but impressively cake-like; however, some reviewers found that the sprinkles had a habit of getting stuck in your teeth, so you might want to watch out if you’ve got any dental work to worry about.

In any event, you might have to go hunting to find them if you want to try them out for yourself. The Unicorn Fudge Stripes cookies aren’t listed on the Keebler website; they are “Special Batch” limited editions, after all. But I might be able to point you in the right direction: According to Instagrammer Snack Stalker, they can be found at Kroger (although be warned that they’re not available online right now); another Instagrammer, Foodie With The Beasts, found them at Walmart (here’s the listing); and they might show up on Amazon, as evinced by this listing (they’re “currently unavailable,” but never say never.) At Walmart, they’re $2.56 per package.

Have you managed to dig up a package of Unicorn Fudge Stripes cookies? Do tell! And please send pictures. Especially if you acquired them from actual elves and/or a unicorn. 2019 might just be the year that myth becomes reality.