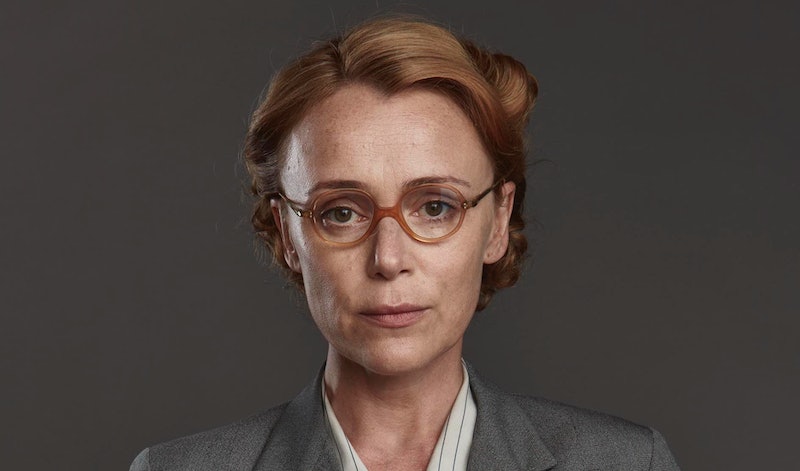 Just when you thought Keeley Hawes had starred in her best shows yet with the uber successful Bodyguard followed by the unbelievable Mrs Wilson, think again. Because she has only gone and bagged herself a role on yet another incredible show that leaves you hanging on the edge of your seat, loving the drama, and above all — sorted for Sunday viewing. However, her appearance in the role had many wondering whether Keeley Hawes wears prosthetic make up in Traitors.

No, she doesn't, and TBH the question itself is troubling for many different reasons. The truth of the matter is that Hawes actually went makeup-free for her role in the new drama. And she had some things to say about the speculation around her look. In an interview with The Times, Hawes explained that the assumptions about her appearance on the show have really hurt her feelings.

"I read somewhere that Keeley Hawes had this new look and she has put on ageing make-up. I was thinking to myself, 'I don't remember that. It is just me with no make-up at all.' Which was a little bit cruel to read," she commented.

Hawes plays senior civil servant Priscilla Garrick in the show. She works with the Prime Minister, doing incredibly difficult work, which is made even more difficult by being the only woman doing her job. "Being a woman in such a male environment was hard and she is just brilliant at it," Hawes told The Times.

The gripping drama is set in the secretive halls of British power at a very delicate time in history — 1945. Post-WWII and just as the Cold War is starting to pick up momentum, a young woman Feef Symonds, (Emma Appleton) is recruited as a spy. However, rather than heading abroad to keep an eye on Britain's enemies, she's tasked with spying on her own government. In a world more secretive than every secret society you've ever heard of — what exact agenda is she pursuing? I know right, this spy thriller is thrilling AF.

We now live in a time where women in the workplace can hopefully expect more attention to be paid to their professional abilities and strengths then their attractiveness to men. And the juxtaposition of how women were treated in the time the show is set compared to the modern day was a stark reminder for Hawes of how difficult women have had it in the past.

"And it is so alien to us now, but at the same time women still come against things like it in the age of Me Too, the way Feef is treated and the way Priscilla has to look and behave to have a career," Hawes told The Times.

Although things are considerably better now for women, we still have an awful long way to go. The fuss over Hawes' makeup proves women's looks still receive an unfair level of scrutiny and unrealistic pressures to look "perfect" are continue to be a thing.

Public figures such as singer Alicia Keys are fighting this pressure by going make up free regularly in public and keeping any make up worn to a bare minimum. Hawes seems to be twirling away the haters anyhow, and lapping up the critical acclaim as per. Now that's a glow up we can all get behind.

You can catch Traitors on Sundays at 9p.m on Channel 4.