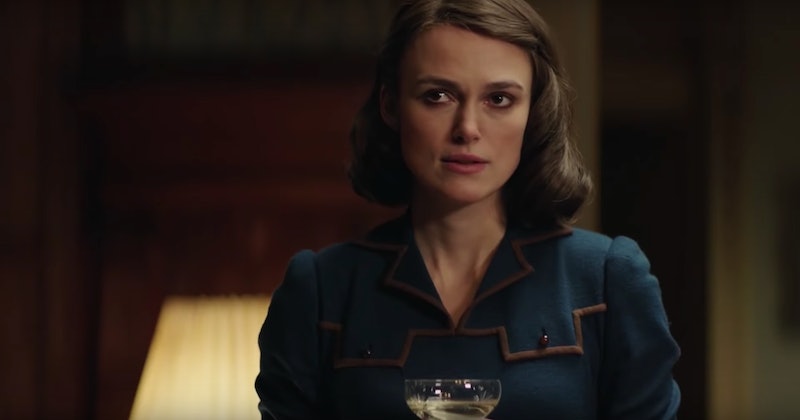 If you asked anyone in 2007 what the sexiest movie of the year was, most people would probably burst out screaming, "Atonement" before you even had a chance to finish the question. Now, nearly 11 years since Atonement brought us one of the hottest sex scenes to take place in a library ever, a new Keira Knightley and Alexander Skarsgard movie, The Aftermath, seems like it could bring the same level of sexiness. The Aftermath takes place in post-World War II Hamburg, Germany, where a woman named Rachael Morgan (Knightley) goes to meet her husband, Lewis (Jason Clarke) at their new house after he's moved into first.

The only problem is that Rachael had planned to move into a new mansion with only her husband — but she quickly learns that Lewis had invited the Germans who'd owned the Hamburg house before the war to live with them. Skarsgard plays the German widower Stefan Lubert who, along with his young daughter, receives a cool welcome from Rachael. The trailer shows the two meeting and silently avoiding each other for most of the trailer, but then in a twist-of-fate, Knightley and Skarsgard's characters find themselves falling in love — and rolling in bed together. Oh yeah, it's hot.

The drama doesn't seem to stop after the two begin their affair, though, because all of the post-war tension between a British colonel and his German tenant causes political friction as well. And if you're a true Atonement fan, you're probably already obsessing over the similarities between that movie and The Aftermath, since much of Atonement also takes place during WWII.

Also similarly to Atonement, The Aftermath's plot comes from a novel, this time by Rhidian Brook. The reviews of The Aftermath focus more on the novel's historical context of a post-war Germany facing tremendous rebuilding than the forbidden love story that stands out from the trailer. Then again, with Knightley, you never really have to choose between a torrid love affair and a historical lesson. Just take her recent film Colette, in which the actor plays the queer novelist Sidonie-Gabrielle Colette during the early 19th century in Paris.

Between Atonement, Colette, The Aftermath, and others, it's hard not to notice a pattern in Knightley's movies — she clearly loves to star in period films. The actor actually has good reason for that though, which she explained in an interview with The BBC in September. Knightley said, "The strongest characters I've found have been in period roles. I also like the idea of breathing life back into what is gone. In a funny way, it's resurrecting the dead."

Knightley also told The BBC that she finds the lack of seriousness often granted to period films due in part to sexism. "There's a negativity around them [period films] because predominantly they're female," said the actor. Even if Knightley finds this element problematic, it doesn't seem like she plans to stop making movies set in past decades anytime soon. And given how titillating the trailer for The Aftermath is, the star's fans will be glad to hear that.