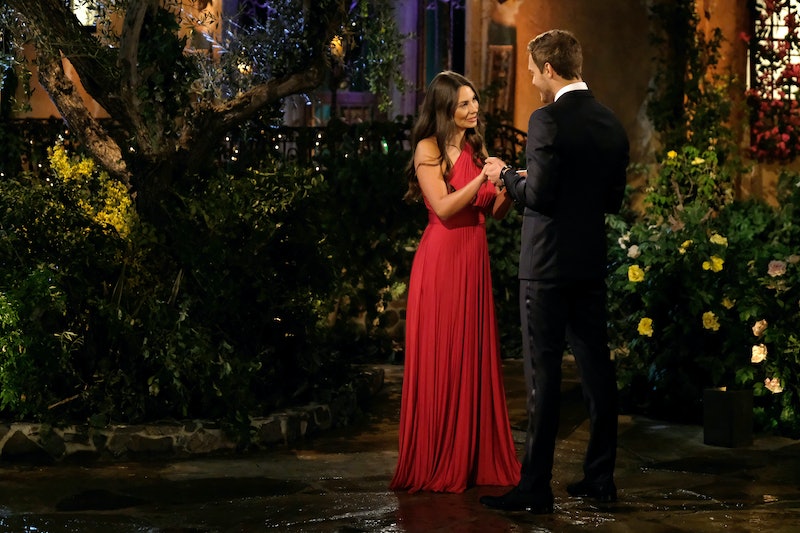 Light spoilers ahead for the premiere of Peter's Bachelor season. Peter has a lot of women to get to know on The Bachelor, but Kelley already has a leg up on the competition. As she explained during her limo entrance, she and Peter actually met about a month before the show, after she ran into him randomly in a California hotel lobby. She told Peter she was apprehensive about joining the season, but took their chance meeting as a sign. And it seems like the two are picking up right where they left off.

Since it seems like Kelley will be sticking around for a while, you might want to learn a little more about her — beginning with the fact that Peter may not be the only member of Bachelor Nation she's met. Last April, she attended the show's unofficial reunion, Stagecoach Music Festival — yep, the very event during which Bachelor in Paradise's Blake Horstmann infamously slept with Kristina Schulman and Caelynn Miller-Keyes in the same weekend, consequently leading to a lot of drama down in Mexico.

Kelley shared a photo from the festival with her friends, though no Bachelor or Bachelorette alumni can be spotted in the background. "The start of an annual tradition," she captioned the snapshot. That implies she plans to return this year, and there's a good chance she'll know quite a few more attendees when she does.

Beyond her Bachelor Nation run-ins, Kelley is an attorney from Chicago, where she works at her dad's law firm, per her ABC bio. Kelley's LinkedIn says she graduated from the University of Alabama (which is also where Hannah B. went, by the way) in 2014 with a bachelor's degree in marketing, and went on to law school at Chicago-Kent College of Law.

When Kelley isn't working, she's either jet-setting somewhere new, cooking, or doing both at once, according to her Instagram bio. Her interest in cooking likely spurred from her allergy to a few common ingredients — she can't have gluten, dairy, or black tea, per ABC. Thankfully, she won't have to worry about eating the date food if she makes it far on the show.

Kelley's ABC bio also says she's been to 26 countries, in one of which she met her most recent ex-boyfriend. He lived in Jordan, where she visited him once or twice a month. But she eventually decided she didn't want to live there permanently and ended the relationship.

Some of Kelley's other recent travel destinations include Hong Kong, Singapore, Vietnam, Thailand, and Indonesia. So if she makes it to the world travel portion of The Bachelor, there's a slim chance she'll be flying somewhere she hasn't been before. If she does end up with Peter, they'll have to get really creative with their travel plans to keep the adventures fresh.