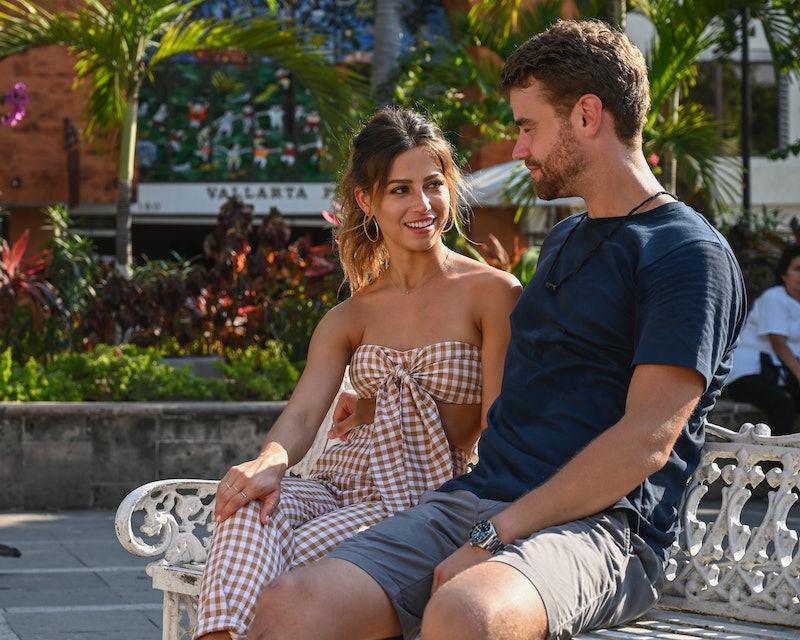 Given its format, the odds of finding love are better on Bachelor In Paradise than on say, The Bachelor. But the odds of making enemies are much, much higher. This season, certain women got right into it when it was revealed that many of them had hooked up with Blake way before filming even started. Caelynn and Kristina were at the epicenter of the drama and didn't appear to be that friendly during this season. And it doesn't seem like Caelynn and Kristina are friends after BiP either.

The Blake Love Quadrangle (he also reportedly hooked up with Hannah Godwin before Bachelor In Paradise Season 6) took up a lot of time this season, and people took sides really quickly. Of course, the women Blake hooked up with were in the middle, and Kristina, being the closest to Blake, took some issues with Caelynn's story and her relationship with Blake. "I came down day two, and I’d already heard and seen everything that was going on and I saw him so broken already that I thought he didn’t deserve what he was getting to that magnitude,” Kristina told Us Weekly after Paradise. She later found herself the focus of Blake's attentions, though they broke up just before the end of the season. Kristina said in the same Us Weekly interview that she felt the whole thing was unfair to her friend, Blake. “He wanted to find someone, and I think he deserved the chance to stay and find that," she added.

So she really had Blake's back, which meant that, by default, she likely didn't have Caelynn's. That being said, Caelynn left Paradise with Dean, Kristina's ex-boyfriend. When the two of them left the beach together to drive off in a van into the sunset, Kristina told Caelynn, "I know we’ve had our differences but if something goes south, call me." So she was the one to leave a door open for a friendship after the show.

Then again, the Bachelor In Paradise reunion promo shows Caelynn crying and Kristina pointing at someone. It could be about anything, but it's highly likely that the Blake/Stagecoach situation will be discussed at the reunion and Caelynn and Kristina have words. This is reality TV after all.

Scrolling through both of their Instagram feeds doesn't reveal any new information either. Although many women and men of Bachelor Nation form friendships, it doesn't seem like Kristina and Caelynn are friends at all. Or even that they run in the same Bachelor Nation cliques.

Caelynn, according to her Instagram, is off traveling the world (probably in Dean's van, let's be real), and Kristina sees more of the Bachelor folk from her own season, like Astrid.

Of course, these women don't have to be best friends and talk every day at all. Are you friends with everyone you work with? Probably not. And their job at the moment entails dating the same people, which only makes things more difficult. The reunion might shed some light on their current friendship status, and things could always change in Bachelor Nation, but for now, it seems they're both focused on other things.

More like this
RHOP’s Robyn Dixon Explained Why Juan Paid For Another Woman's Hotel Room
By Brad Witter
Rachel Fuda Gave Birth Just Weeks Before 'RHONJ' Season 13
By Brad Witter
Erika Jayne's Estranged Husband Tom Girardi Has Been Indicted On Fraud Charges
By Jake Viswanath
Everything To Know About A Potential 'RHODubai' Season 2
By Kadin Burnett and Brad Witter
Get Even More From Bustle — Sign Up For The Newsletter
From hair trends to relationship advice, our daily newsletter has everything you need to sound like a person who’s on TikTok, even if you aren’t.