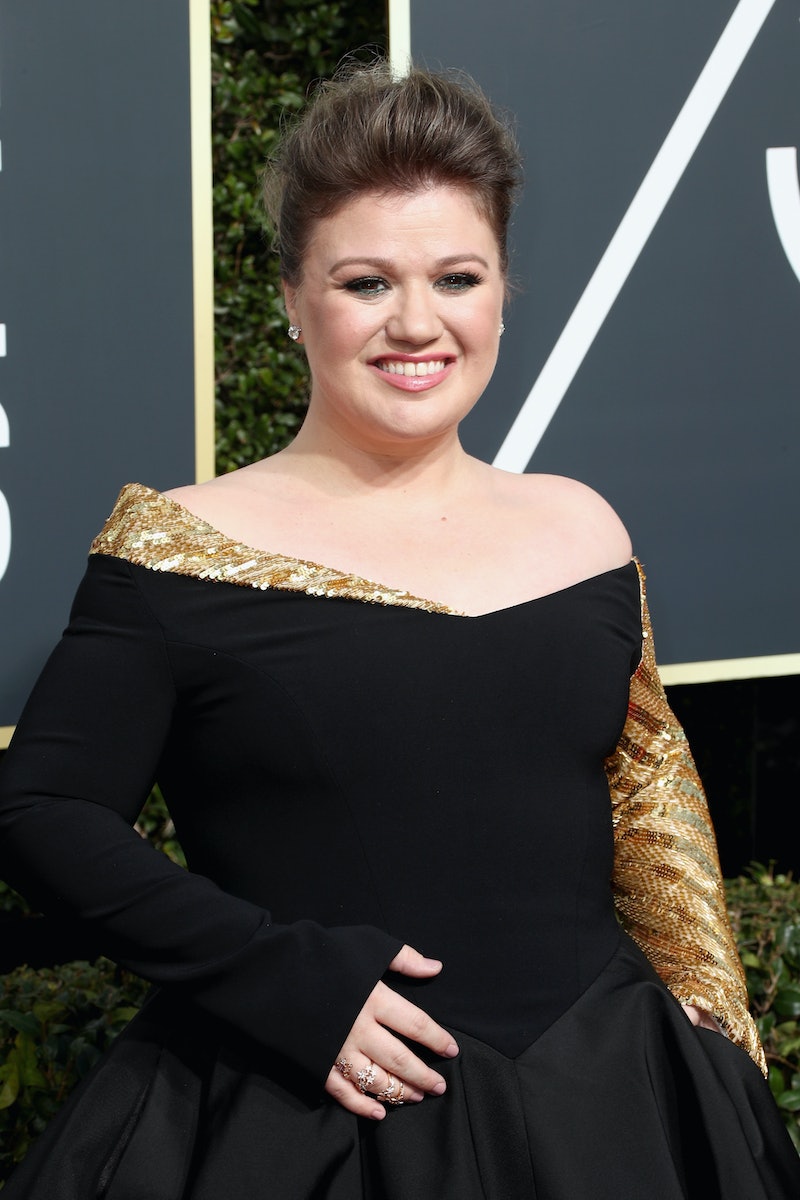 Even celebs can get starstruck, and that very thing happened when Kelly Clarkson met Meryl Streep at the 2018 Golden Globes. The beautiful moment came Sunday night on Jan. 7 after Clarkson was done being interviewed on the red carpet by Ryan Seacrest. It was then that she spotted Streep, and her face did what probably all of our faces would do if we saw Streep just chilling in front of us.

As Seacrest helped Clarkson down the stairs following their interview, Clarkson stopped dead in her tracks. "Oh my god, that's Meryl," she said climbing back up the steps and away from her idol. A bewildered Seacrest thought that she had tripped, but Clarkson had a much more reasonable explanation for her momentary panic. She just really loves Streep and didn't know what to do. "Oh my god, can I meet you? I'm such a fan," Clarkson then bravely asked Streep. The actor, sweet human that she is, obviously greeted Clarkson with a warm smile and an embrace. "I've adored you since I was like eight," Clarkson continued to gush as the two hugged.

Honestly, Clarkson's facial expressions alone deserve to be remembered and, well, memed forever. Clarkson is all of us about Streep, and also me about, like, cute dogs.

Streep didn't seem bothered about meeting Clarkson either, though. It's not like it's a huge imposition to meet the first ever American Idol winner. Clarkson is a pretty big star in her own right, and Steep greeted her warmly. She even put her hand on Clarkson's face, which in fandom-language basically means that Clarkson can never wash that cheek again.

Seacrest is just happy that Clarkson's erratic behavior wasn't actually her falling down the steps, which is what he initially thought happened. He claimed his "heart dropped" at first, thinking that Clarkson tripped on her long gown. But, nope, it was just a Streep sighting. Though, you can't blame Seacrest for having that be a fear that haunts him. Maybe, like, IDK, no more interviews up giant steps?

Interestingly, it seemed from her reaction that Clarkson had never come across Streep before, which is surprising considering they've both been stars for a while. But they don't really run in the same circle apparently. Clarkson was at the Golden Globes awards ceremony to present an award and Streep was there for her work in The Post (written by & co-producer: Liz Hannah).

Clarkson has never herself been nominated for a Golden Globe, so she's not usually on the guest list. Though, it's worth noting that she does have some award show nominations under her belt. She's been nominated (and occasionally even won) at the Teen Choice Awards, the MTV Video Music Awards (VMAs), and the Grammys (duh). Maybe the Grammys can get Streep to present an award at the next ceremony and bring this adorable duo together again.

It's always sweet to see that celebs really are just like us. They geek out over their faves and lose their cool in the presence of greatness just like we all probably would if we ever got that close to Streep — or Clarkson, frankly. Plenty of people would go all "Clarkson" if they ever saw the American Idol winner IRL as well.