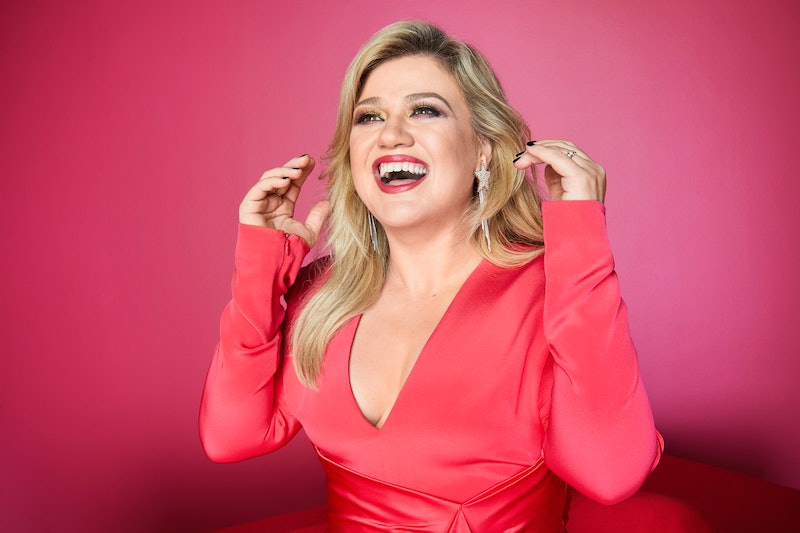 Las Vegas would certainly suck without her — so it's a good thing the original American Idol is heading to the bright lights of Sin City. On Friday, Kelly Clarkson announced her upcoming Las Vegas residency, Invincible, during the "Kellyoke" segment of her daytime talk show. Instead of opening with one of her now-iconic covers, Clarkson kicked off the latest episode of The Kelly Clarkson Show by performing a medley of her own hits in order to celebrate the big news.

"When I launched this show, I heard from fans everywhere who were worried I'd stop putting out new music and touring," Clarkson told the audience, surrounded by a group of sequin and feather-clad showgirls. "Well, don't worry. I got you. I have a major announcement to make today: I've scored my very own residency in Las Vegas!"

Kelly Clarkson: Invincible will kick off on April 1, 2020 — which Clarkson clarified was "not an April Fool's joke" — at the Zappos Theater at Planet Hollywood Resort & Casino. In addition to sharing her excitement for the residency, Clarkson also joked that she's planning to "play all the Wheel of Fortune slots ... The gambling, the shows, the all-you-can-eat buffet, and crab legs, I love all of it."

When Clarkson isn't busy playing the slot machines and treating herself to the buffet, the singer will be providing an "immerse fans in a one-of-a-kind up-close music experience" during the 16-show run of Invincible that "rocks through her nearly two-decade long catalog of award-winning smash hits," according to a press release obtained by Entertainment Tonight. "I’ve always loved performing in Las Vegas and the high energy of the crowds there," Clarkson said in the press release. "So many of my musical idols have had, and still have, incredible residencies on The Strip, and I’m so excited to create my own!"

While the press release for Invincible emphasizes Clarkson's biggest hits — which range from "Stronger" to "Since U Been Gone" to "Because of You" — there's a chance the singer will also perform some new music in Vegas. Back in April, Clarkson teased she was "off to the studio to work on the new album" on Twitter, and a few weeks later, she gave E! News a few more details about the project on the Billboard Music Awards red carpet. "[The music] always is ever-changing, so I hate to be so final about the sound and everything," Clarkson said.

Still, she did offer up a very appropriate description of what fans can expect: "It is ... as if Meaning Of Life and Breakaway and Stronger had a baby," Clarkson told E! News. "Like all three of those albums had a baby. It’s a little bit more pop, but it’s still got the soulful stuff in there."

While Clarkson's fans may have to wait a bit longer to hear that new music, they can at least start buying tickets for her Las Vegas concerts beginning Nov. 8. A new album, a residency, and a daily talk show — Clarkson really can do it all.

More like this
Linda Ronstadt’s “Long Long Time” Plays A Pivotal Role In The Last Of Us
By Brad Witter
Hilary Duff's Husband Matthew Koma Has Her Name Tattooed On His Butt
By Jake Viswanath and Stephanie Downs
Theo James Would “Love” To Star In George Michael Biopic
By Sam Ramsden
Taylor Swift Visited The 'Glee' Set For This Bizarre Season 5 Episode
By Grace Wehniainen
Get Even More From Bustle — Sign Up For The Newsletter
From hair trends to relationship advice, our daily newsletter has everything you need to sound like a person who’s on TikTok, even if you aren’t.