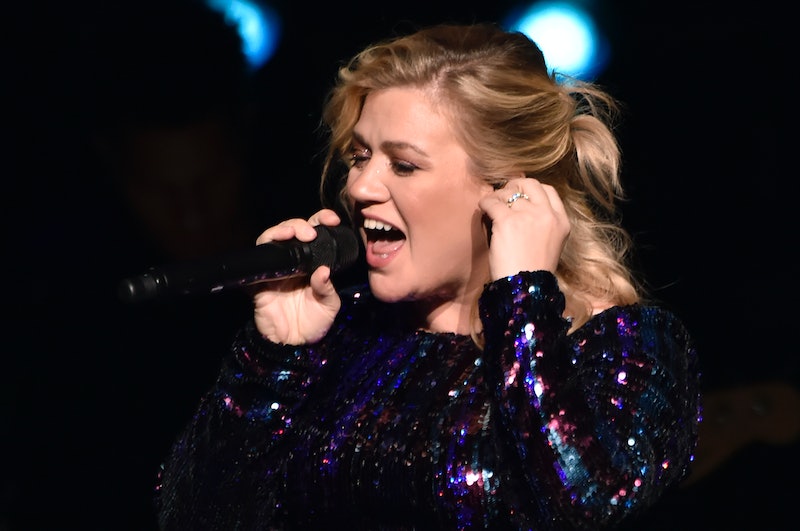 While superstar singer Kelly Clarkson was hosting the Billboard Music Awards and filming The Voice a week later, she had two consecutive health scares. One of Clarkson's health scares was a burst ovarian cyst, but fellow Clarkson-lovers, don't worry: your esteemed leader is "totally great now," according to a new interview with PEOPLE. And if you think you have an ovarian cyst, you can learn a lot from Clarkson's response to her own experience.

Immediately after hosting the Billboard Awards, during which she was in immense pain, Clarkson flew home to get an emergency appendectomy. Not a week later, while filming live shows of The Voice, her pain returned, but even worse. "Blake [Shelton] was talking to me," she told PEOPLE, "and all of the sudden, everything he said just went away and I had to grab his arm and I was like, ‘Something is wrong.'"

That something was "more painful than the appendicitis," Clarkson said, and she went to the ER to get herself checked out. Getting yourself to a hospital, if you can, when you experience pain like that is tremendously important. Managing ruptured ovarian cysts often requires pain management and tracking, but in rare cases can require surgery, according to Johns Hopkins Medical's website. But even if you don't need surgery, you deserve the peace of mind and pain management that seeking treatment can offer.

According to 2018 study about people living with chronic pain published in the journal Pain Research and Management, women's reports of pain are taken less seriously by doctors than men's reports of pain. And this is especially true for women of color. For example, doctors routinely dismiss Black women's reports of pain due to the racism and sexism in the medical industry, according to a 2012 study published in the Journal of Health Disparities, Research and Practice. And trans men and non-binary people seeking treatment for pelvic pain often confront dysphoria and poor treatment by physicians.

But seeking treatment when you think you might have an ovarian cyst is very important. According to the Cleveland Clinic's website, "If you experience intense pelvic pain, especially if it happens quickly, you need to get help immediately." And even if the pain is less intense, the Clinic still recommends seeking medical treatment, especially if it's accompanied by feeling bloated, pain on one side of your lower abdomen, or changes in bowel movements or urinary habits.

And remember that this isn't pain you need to simply push through without seeking treatment. Clarkson tweeted after the Billboard Music Awards that she "may or may not have broken down in tears after the show from all the pain." And though she told PEOPLE that "I just didn’t want to leave people hanging" at the Awards and then again for The Voice, it's important to remember the ways thinking "the show must go on" can impact your body. The expectation to silently push through pain affects people of different genders in different ways, but ultimately silence makes everyone's health suffer. But it's important to remember that you don't have to put on a brave face if you don't want to.

Women experience acute pressure to ignore their pain for the sake of others, and oftentimes, that leads to not seeking medical treatment from doctors who might well dismiss your pain anyway. But the good news here is that Clarkson sought treatment as soon as she felt she needed to do so, both for her appendicitis and her ruptured cyst. And if you feel like you might have a ruptured cyst, you deserve to seek treatment, too. Because just like Ms. Kelly Clarkson, you deserve to have your pain recognized as real and treat it as such.