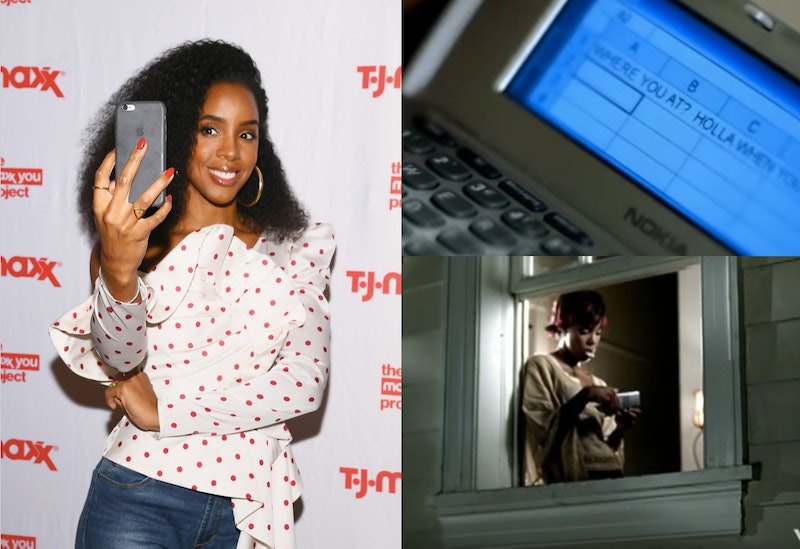 When the name "Kelly Rowland" is mentioned, so many things come to mind. She was part of the forever-legendary Destiny's Child. She successfully transitioned into a solo career. She is a proud mom, as well as a published author. Oh, and Kelly Rowland is the subject of a never-ending meme. Yes, the internet can't get enough of a certain scene from her 2002 "Dilemma" video. And when sitting down with the singer at her event promoting T.J. Maxx's The Maxx You Project, of course I needed to hear Rowland's response to that "Dilemma" meme.

I help her out and name the Microsoft program, which she echoes back. "Excel! Let me tell you something. I remember when they gave me — what was it, a two-way pager? Flip phone? Skytel? When they gave me that, no one was thinking, in 2018, '17, '16, that someone was gonna bring that up," she says. "Here come the millennials. They're like, "Oh my god, what is she doing with that?'"

As if apologizing to the masses, Rowland jokingly proclaims, "Guys, I didn't know. Please forgive me, if I'd known better, I wouldn't have done it. I would've just started typing. But we thought that you guys weren't going to catch it, but you're so smart."

Of course, she's a good sport about the whole thing. And it'd be unfair to trivialize her career by solely focusing on that one moment. But it is nice to finally clear the air, right?

Luckily, Rowland is very aware of her music's influence on a generation — well beyond the world of memes. She remembers being in Paris and realizing for the first time the impact her music was having on young women. "There was a young lady and she came to the meet-and-greet," Rowland says, "She was talking about something that had taken place at school, and she said her and her friends would pretend to be Destiny's Child and they would sing 'Independent Women." It's a moment that Rowland says she'll "never forget," but it's only one of many that have occurred.

"Hearing [those stories] over and over and over again, you realize that the music is actually doing more than what you think it is," she explains. "It's actually giving somebody ammunition to actually turn on their brain and say, 'I am strong, I am proud to be who I am,' and then you have this whole army of fans, who completely feel the same way you do when you sing the song."

For the singer, that very experience is "one of the most amazing, magical moments" imaginable.

Chances are that anyone who's listened to Destiny's Child can relate. And whether spurring memes or empowering fans to be independent, Rowland's reach in pop culture is undeniable. (Yes, even though she once tried to send texts using Excel — she's officially forgiven.)

More like this
Harry Styles' 'X Factor' Audition Didn’t Start Off As Well As You Thought
By Jake Viswanath
Dan Levy Showed His Mariah Carey Devotion Yet Again With A “Honey” IG Story
By Grace Wehniainen
Now That 'Renaissance' Is Here, Let’s Revisit Beyoncé’s First Solo Album From 2003
By Grace Wehniainen
Selena + Chef Season 4 Was Filmed At Hannah Montana's Old Malibu House
By Jake Viswanath
Get Even More From Bustle — Sign Up For The Newsletter