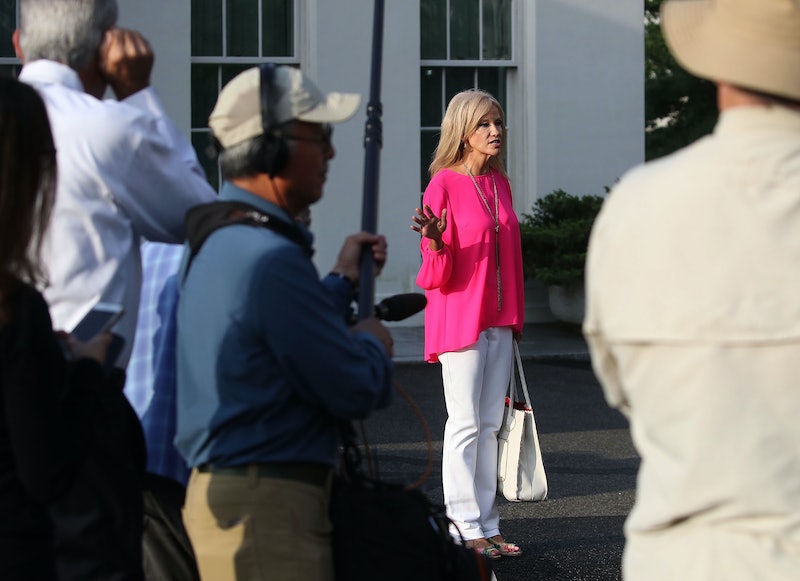 The White House press corps posed a few questions to Kellyanne Conway, counselor to President Donald Trump, as she was walking outside the White House on Friday. As she fielded queries from a gaggle of journalists, she decided to pepper in a question of her own. “Why is everybody so obsessed with the President of the United States?” Conway asked.

Conway was smiling as she walked toward a group of reporters on Friday, but that beam seemed to fade as she answered questions about issues such as veterans affairs. As she started to walk away from the press, one journalist asked her about Trump’s decision to revoke former CIA Director John Brennan’s security clearance. This happened Wednesday, and Trump officials said it was done in part because Brennan — a known critic of Trump — gave “increasingly frenzied commentary,” The New York Times reported.

Conway’s terse response to the question about Brennan’s security clearance has been circling Twitter. “Why is everybody so obsessed with the president of the United States that they can't even begin or finish a sentence without mentioning his name five times,” Conway said in a video posted by CSPAN. “It's kind of weird.”

Conway then argued to the press corps that Brennan should have sounded the alarm about Russian interference in the 2016 election sooner. But that's not what people are focusing on.

Folks on Twitter were pretty shocked that someone who works at the White House would inquire about why people are so interested in the president.

Adam Best, founder of the newsletter The Left, wrote sarcastically on Twitter: “She's right. We're all way too concerned about an unstable tyrant running the world's most powerful country. Let's focus on the issues that truly matter!”

While it's likely that Conway wasn't asking her question in a literal sense, Rachel Vail tweeted an analogy to help explain things to Conway, just in case. "Asking the White House Press Corps why they keep talking about the president is like asking ESPN why they are so obsessed with sports," Vail wrote.

Some people, such as New York Magazine’s Daily Intelligencer writer Jonathan Chait, made the connection that Conway all but quoted Regina George from the movie Mean Girls.

Chait tweaked Conway’s quote and created this parody question in his story: “People are just obsessed with Donald Trump just because he’s the most powerful person in the world and does almost nothing to conceal his sociopathic narcissism. It’s so weird!”

The Week noted that Conway seemed "fed up" as she addressed the press corps. That could be the case, considering A) it is Friday, and B) her "obsessed" inquiry wouldn't be the first time she made headlines this week. The Washington Post's Ben Terris wrote an in-depth piece about Conway's relationship with her husband on Wednesday. Conway is one of Trump's most devoted advisers, while her husband, George Conway, speaks out against the president on Twitter.

It's fair to assume Conway has had a long week, particularly because that article got a lot of attention. You could even say people were "obsessed" with it.