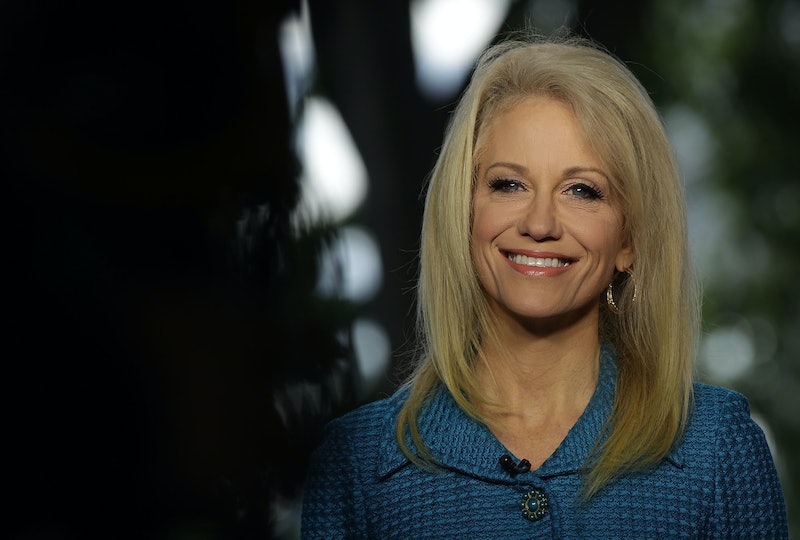 Not that she'd ever subject herself to it, but I reckon Kellyanne Conway may gain something by taking a gender studies class. Going by her quotes to Business Insider, she could learn a thing or two about the terms "feminism" and "sexist." For example, Conway doesn't think that sexism exists for Hillary Clinton, so there's that. She's also "a non-feminist, definitely," because she believes that today's feminism is "anti-male." Disputing that is a well-trodden path, especially since she's said it before. So, I'm going to go back to that Clinton thing, because it's just screaming for some unpacking.

Her interview with Business Insider suggests Conway is happy to claim that she's being treated badly whenever she runs up against a hard question from an interviewer, but Clinton is apparently too accomplished for such a banal thing to affect her. Or, in Conway's words, "of course sexism exists, but it usually doesn't exist for a woman who was the former first lady of the United States of America, has a Yale law degree, and was the secretary of state and United States senator." It's true that sexism affects women from various backgrounds differently and that feminism must be viewed as intersectional. However, you aren't exempt from sexism just because you have a degree or were elected to office.

Conway also "[loves] using that word [sexism]," she told Fox News during the campaign, but only as it pertains to liberals in her mind being sexist. The sexist liberal in question this time was Tim Kaine, apparently, because in her mind he was interrupting the female VP debate moderator too much. But when Clinton, whose achievements Conway could list out, loses to a man with zero qualifications for the job, that's not sexist at all. Right.

Trump's victory, of course, was sexism writ large, an extremely obvious case of an overqualified woman being subjected to greater scrutiny and ultimately losing out to a less-qualified but more boastful man. And yet Conway only seems willing to consider sexism as a factor when she perceives it to be affecting her negatively, and when it's coming from a liberal.

Maybe this is just another expression of Conway's alternative facts. "Go and take a look at the way I'm treated and tell me it's not sexist, tell me it's not based on my gender," Conway told Business Insider, talking about the way she's covered in the media. "When's the last time you saw a great story about the beer bellies and the bad comb-overs in Congress versus what was I wearing or what was a female saying or doing?"

What she ignores, of course is that most of the criticism coming her way is directed at her uncanny ability to lie about most things and defend her boss even on his absolute worst days — which is really saying something. Before she calls it sexist again, though, she should look at how her equals are treated in similar situations — think Sean Spicer, who also suffers a fair amount of abuse, in much the same vein as Conway does.

Maybe Conway doesn't believe that the world needs feminism, but on behalf of the multitudes of women whose lives her boss could indirectly end up negatively affecting, it's a really good thing that it exists.