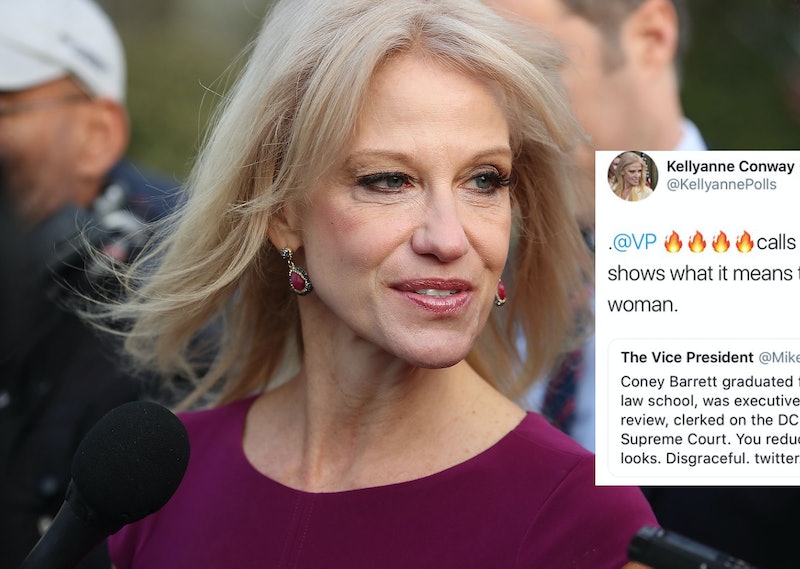 Presidential advisor Kellyanne Conway had another factual slip-up this week, this time with the vice president's Twitter account. Ostensibly thinking she was retweeting the real vice president, Conway praised a fake Mike Pence Twitter account for "[calling] out sexism" and being "pro-woman".

The whole thing started with an article written by CNN's Chris Cillizza, about a potential Supreme Court justice nominee, Amy Coney Barrett. He argued that Coney Barrett presented the perfect image for a Trump SCOTUS nominee, as a religious, reliably conservative woman in her mid-40's. "If you believe Trump makes decisions based on image and appearance (and he does), then here's the next Supreme Court Justice," he tweeted, along with a link to the piece.

A Twitter account with the name "The Vice President" retweeted Cillizza with the comment, "Coney Barrett graduated from a prestigious law school, was executive editor of law review, clerked on the DC Circuit and the Supreme Court. You reduced her to her looks. Disgraceful."

Cillizza later emphasized he was referring to Coney Barrett's ideological presentation, not her physical appearance. Even so, Conway retweeted the fake Pence's message, complete with four flame emoji. ".@VP calls out sexism and shows what it means to be pro-woman," she wrote, a screenshot shows.

She has since deleted her original tweet, replacing it with one acknowledging that the fake Pence is in fact a fan account — she changed it to "VP fan account calls out sexism and shows what it means to be pro-woman."

While Pence, like many others in government, does have two Twitter accounts — the Vice President Mike Pence account (@VP) and his personal account (@mike_pence) — the fake account belongs to a fan. The fan has the username @MikePenceVP, but is not verified on Twitter like the real vice president's accounts. In fact, the fan's bio reads "Fan account. My Goal is to expose liberal hypocrisy and Fake News Bias."

On Monday, at the time of Conway's retweet, the fan's Twitter name was "The Vice President", but currently, the account's name is displayed as "I ♥️ Mike Pence."

At the Conservative Political Action Conference in 2017 She similarly praised Donald Trump for promoting women saying, "Donald Trump is someone who is not fully understood for how compassionate and what a great boss he is to women." Despite being the first woman to successfully run a presidential campaign, Conway has previously said she does not consider herself to be a feminist "in a classic sense", because she feels the term implies being "anti-male" and "pro-abortion."

This is not the first of Conway's media gaffes — just last month, during a CNN interview about NFL players' patriotism she accidentally called the president the "commander in cheese", before correcting herself. Twitter subsequently erupted with cheese-related Trump puns. Last year she made headlines when she claimed on MSNBC that two Iraqi refugees were responsible for the "Bowling Green massacre" (which never happened). Shortly after, she received heavy criticism for promoting Ivanka Trump's fashion label on Fox & Friends, an apparent violation of governmental ethics.

And who could forget Conway's defense of the president's "alternative facts"? The term has since been inescapably intertwined with her reputation as President Trump's spin master, and emblematic of the frequent falsehoods pushed by the administration.

Many argue that Conway's string of widely publicized mistakes are a smokescreen, intentionally set up to distract the public from the more complex policy moves of the administration. As long as Twitter is mocking Conway's latest gaffe, the logic goes, people miss (or at least pay less attention to) important — albeit drier — initiatives that they would otherwise oppose.

More like this
Romance Authors Are Mobilizing For Reproductive Rights
By Natalia Perez-Gonzalez
Buckingham Palace Shuts Down Rumour About King Charles III's Coronation
By Sophie McEvoy and Sam Ramsden
New Coins Unveiled As King Charles III's Reign Gets Underway
By Sam Ramsden
Bustle Daily Newsletter: October 6, 2022
By Hayley Schueneman
Get Even More From Bustle — Sign Up For The Newsletter