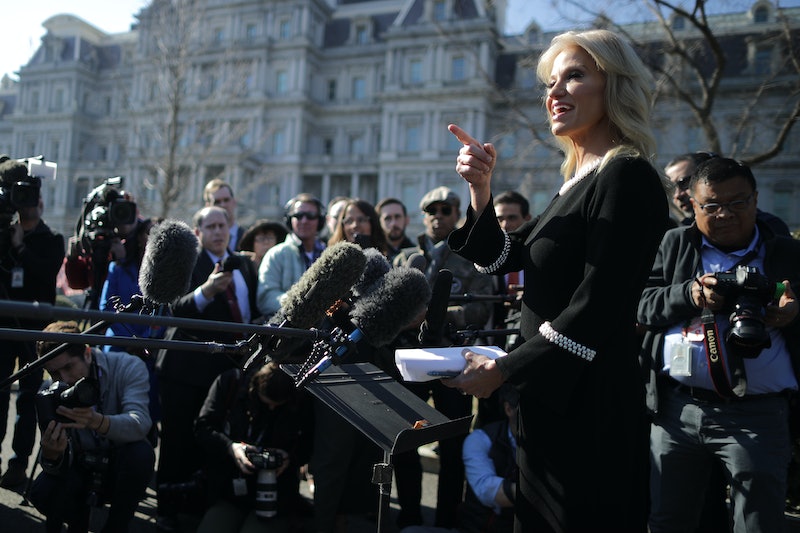 During an interview on Fox News Sunday, one of President Trump's senior advisors made it clear that longstanding animosity between her husband and the president isn't an issue in her professional life. Kellyanne Conway said her husband George's feud with Trump doesn't affect her job — and stressed that George was even a strong Trump supporter at one point.

Conway made her remarks during a chat with Fox News Sunday host Chris Wallace. USA Today noted that Wallace asked the president's counselor, "Why is your husband attacking your boss?" In response, Conway asserted, "Well, you can ask my husband. But, it doesn’t affect my job. Because my job is to be counselor to the president and do the best job I can do … "

George has been criticizing Trump on social media for quite some time and, recently, the president has been very vocal in pushing back against some of these criticisms. For example, in mid-March, George released a series of tweets suggesting that he believes Trump could have mental health issues, ABC News reported. Trump didn't comment on George's tweets directly, but instead shared several tweets of his own. In one tweet, the president said that George was a "total loser" and, in another, he referred to him as "a husband from hell."

Wallace pointedly asked Conway if this tense Twitter relationship between George and Trump hurts her marriage — a question which Conway found offensive. "Oh, Chris, what are you, Oprah now? I mean, what am I, on a couch and you are a psychiatrist? I think it’s a really inappropriate question ...," she said, per Rolling Stone. "That’s the line over which nobody should have crossed ... I’m surprised that people would ask that question ... I have seen homewreckers on TV as marital experts, all of a sudden. It’s very amusing to me."

In another portion of her interview on Fox News Sunday, Conway also insisted that her husband was once a Trump supporter. "George was very supportive of President Trump, prior to the Election Night in his MAGA hat, blocks away from here at the Hilton in New York. Wanted to take a job in the Trump administration and changed his mind," she emphasized. "And was a guest of the president and first lady months after he withdrew himself from consideration at the White House. And, when he withdrew his name, he said that he would still support the president, his agenda, and, quote, his 'wonderful wife's work.'"

George has also commented publicly on his Trump administration job offer. During an interview with the Washington Post on March 19, he explained that he decided not to take the job leading the civil division at the Justice Department because he believed Trump had an acrimonious relationship with the department. "I’m thinking to myself, this guy is going to be at war with the Justice Department for the next two years,” George said to the Washington Post. “I’m not doing this.”

During this same interview, George offered some commentary of his own about why he chooses to criticize the president on Twitter, despite the fact that his wife works in Trump's administration. As George put it, he uses social media as an outlet to avoid getting into an argument with Conway. "The tweeting is just the way to get it [frustration with the Trump administration] out of the way, so I can get it off my chest and move on with my life that day," George said to the Washington Post. "That’s basically it. Frankly, it’s so I don’t end up screaming at her [Conway] about it.”

Overall, it's clear that the dynamic among Trump, Conway, and George is quite unique, to say the least. Nonetheless, Conway insists that her husband's criticisms of her boss don't play a role in her ability to serve as an effective counselor to the president.