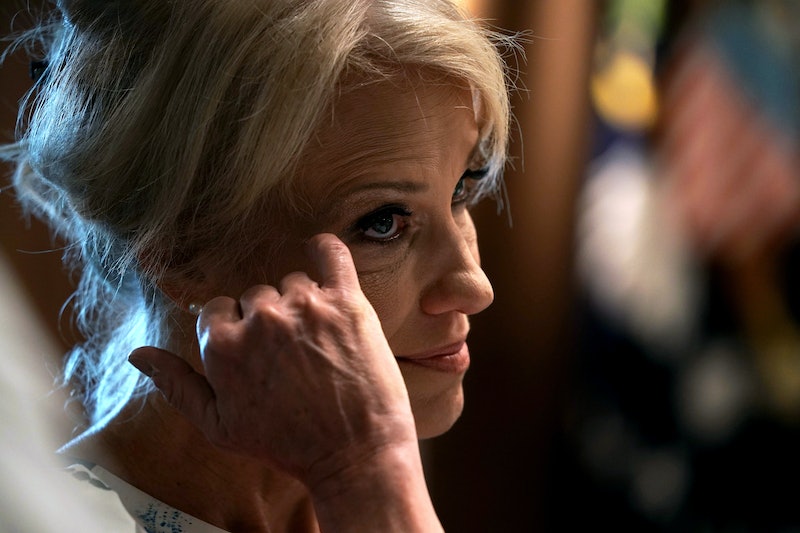 A federal watchdog agency said Thursday that senior presidential adviser Kellyanne Conway should be fired for repeatedly violating the Hatch Act, The Hill reports. The Hatch Act bans certain federal employees from engaging in certain types of political activity, and the Office of Special Counsel (OSC) said that Conway has violated it over a dozen times during her time in the Trump Administration.

"Ms. Conway's violations, if left unpunished, would send a message to all federal employees that they need not abide by the Hatch Act's restrictions," Special Counsel Henry Kerner wrote in a letter to President Trump Thursday, according to CNN. "Her actions thus erode the principal foundation of our democratic system -- the rule of law."

The White House has staunchly rejected the OSC's findings, however. In a letter to Kerner, White House Counsel Pat Cipollone said that OSC's conclusion is "based on numerous grave legal, factual, and procedural errors," the Hill reports, while Deputy White House Press Secretary Steven Groves said that the OSC's recommendation is "deeply flawed," and accused the office of attempting to "violate [Conway's] constitutional rights to free speech and due process," according to CNN.

The Office of Special Counsel — which is unrelated to the similarly-named office formerly headed by Robert Mueller — doesn't have the power to remove Conway from her post, only to recommend that the president do so.

The Hatch Act is a 1939 law that prohibits certain employees of the federal government from advocating for or against candidates for political office. Specifically, the law says that said employees may not "use [their] official authority or influence for the purpose of interfering with or affecting the result of an election."

In its letter to the White House, the OSC cited comments that Conway made on Fox & Friends in 2017 regarding the special Senate election in Alabama, which pit Democrat Doug Jones against Republican Roy Moore.

"Doug Jones in Alabama, folks don’t be fooled," Conway said in the televised interview. "He’ll be a vote against tax cuts. He’s weak on crime, weak on borders. He’s strong on raising your taxes. He’s terrible for property owners. And Doug Jones is a doctrinaire liberal, which is why he’s not saying anything and why the media are trying to boost him."

The OSC also cited Conway's response to earlier allegations that she'd violated the Hatch Act. In May, when a reporter asked Conway to respond to the OSC's May 2018 conclusion that she'd violated the Hatch Act, she said "blah, blah, blah" as the reporter was talking, The Hill reported at the time. She also mocked the possibility that she would face any repercussions for breaking the law.

"If you’re trying to silence me through the Hatch Act, it’s not going to work," Conway said. "Let me know when the jail sentence starts."

A spokesperson for the OSC told ABC News that this was the first time in the office's history that it had directly called for a federal employee to be fired for breaking the Hatch Act.

"Ms. Conway's disregard for the restrictions the Hatch Act places on on executive branch employees in unacceptable," Kerner wrote. "If Ms. Conway were any other federal employee, her multiple violations of the law would almost certainly result in removal from her position by the Merit Systems Protection Board."