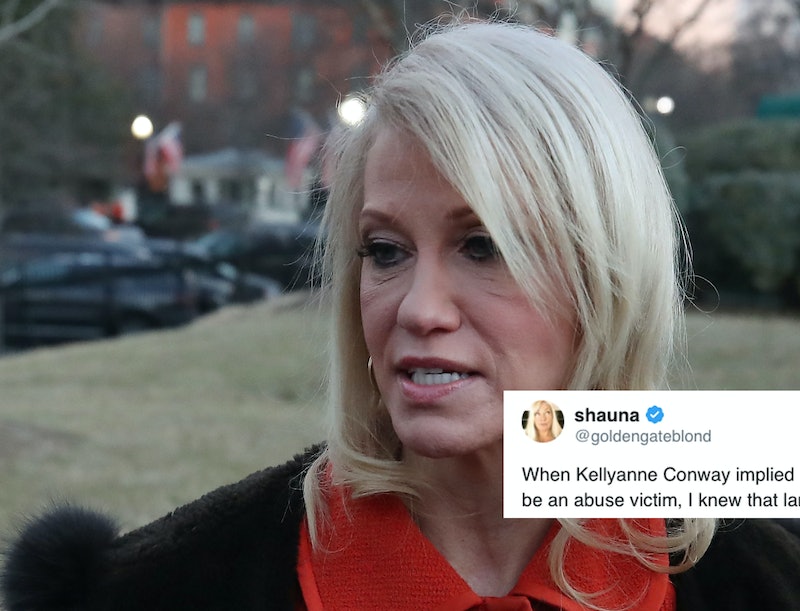 On Sunday, one of the most well-known presidential advisers made appearances on several weekend news programs to discuss the abuse allegations against Rob Porter. Kellyanne Conway defended Trump saying that while she believes the women who have said Porter abused them, she didn't think his current girlfriend, White House communications director Hope Hicks, was in any danger.

"I'm very close to Hope Hicks," Conway said on CNN's State of the Union. “I don’t worry about her in that respect. I’m sorry for any suffering that this woman has endured. But in the case of Hope, I’ve rarely met somebody so strong with such excellent instincts and loyalty and smarts."

Porter resigned on Wednesday after allegations that he physically abused two of his ex-wives were made public. However, he has said that the "outrageous allegations are simply false." One of his ex-wives, Jennie Willoughby, told CNN's Anderson Cooper that she believed Porter would eventually be abusive toward Hicks, even if he hasn't yet. Conway's remarks about Hicks' strength were a response to Willoughby's concerns.

This is not the first time that someone closely affiliated with the Trump administration has suggested that certain people are less likely to be abuse victims because of their character. As Shauna Wright pointed out on Twitter, Eric Trump, the president's son, used the same argument in August of 2016 when talking about workplace sexual harassment.

Specifically, he said that his sister, Ivanka, wouldn't put herself in a position where sexual harassment takes place:

At the time, Eric was discussing recently ousted Fox News CEO Roger Ailes, who was accused of sexually harassing dozens of women during his tenure at the company, which he co-founded. Ailes, who died in May of 2017, denied many of the allegations, but didn't publicly comment on every accusation, individually.

At the crux of his argument — as well as Conway's — is the idea that a "strong" woman who is equipped with a strong intuition will protect herself from abuse. In other words, their argument is that, while perpetrators of abuse are definitely in the wrong, would-be victims can protect themselves, if they try hard enough.

The argument presumes that only "weak" people are victims of abuse, and inadvertently shames those not "strong enough" to protect themselves. And as Wright pointed out in her tweet, this thinking seems to be endemic in those closely affiliated with the president, who has himself been accused of sexual misconduct by more than a dozen women. (Trump has repeatedly denied these accusations, and described the women who came forward as "liars.")

A simple survey of recent high-profile abuse stories immediately dispels this notion, but so does the fact that abusers come in all shapes and sizes, and so do their victims. With partner violence in particular, abusers don't tend to reveal their coercive tendencies right away. They may be charming and chivalrous at first, fulfilling all the ideals for a good boyfriend or girlfriend.

Slowly, research shows, that charade starts to fracture and abusers then tend to rely on manipulation and scare tactics to make sure that his or her victim is too afraid to tell anyone what is going on behind closed doors. There is no consistent description of what an abuse victim looks like, and even people who seem strong-willed and independent may find themselves in an unsafe relationship.

Conway's remark that she is not worried about Hicks because Hicks is "so strong with such excellent instincts" is directly opposed to much of the research surrounding abusive relationships. It also veers on victim blaming, which experts say can perpetuate abuse because it makes victims feel too afraid to come forward.

Whenever someone is given the spotlight to speak on such issues, it's important to consider the impact that their speech might have on others, and that includes having the right information on deck. With domestic violence, you often have to look beyond the surface to find the facts.