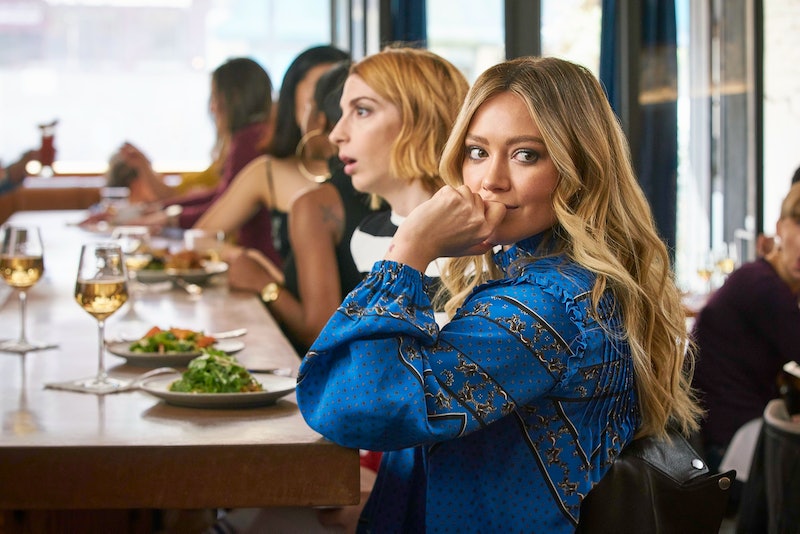 Kelsey has a lot going on this season on Younger. She’s stressed. Her hair is falling out. Her job involves more pressure than ever. Her usual release — casual hookups with Zane — is no longer an option, now that he’s back to backstabbing her at every corner. So this week, she’s in search of a new dating app fling, but Lauren immediately points out that her profile has a glaring issue. Eventually, Kelsey hides her job status on Younger in order to attract more dating prospects. She’s simply not going to get matches with men while flaunting that she’s a bigwig at Millennial Publishing, Lauren tells her.

That’s a pretty bleak outlook on modern dating — is it really true that women with less “intimidating” jobs listed on their Tinder profiles receive more matches? It definitely works for Kelsey. Her messages begin to overflow with interested suitors once she ditches her “BDE,” as Lauren so gently puts it, and changes her position to the vaguer “creative director.”

The jury is still out on dating apps in particular — data on whether men swipe left or right explicitly based on a women’s occupation is scarce. But the idea in general of men being intimidated by a female romantic partners with more powerful jobs than them is not new.

There are countless advice columns targeted at both men and women that seem to suggest a woman making more money than her male partner is a treacherous situation. As you might guess, those kinds of articles don't really exist for women worried about their husband making more money.

Jenna Birch, author of a relationship-focused book entitled The Love Gap, wrote an essay for Cosmopolitan magazine in 2017 that hinted there’s often a difference between what men claim to want and what they actually go for when they date.

“More women than men now graduate college. Nearly half the U.S. workforce is female and 40 percent of those women are their family’s breadwinner,” she writes. “But as they strive for success, they’re hitting a snag. They can’t find a guy who’s comfortable with all that awesomeness.” She suggests that due to outdated, sexist gender roles society has ingrained in our brains for decades on end, men can feel emasculated when their female partner has a higher profile job, or higher paying job, than they do.

While we’d probably like to think we’re past these kinds of stereotypes, for a lot of women, they’re still a problem. Even in our music and pop culture, which is — thankfully — fuller than ever of awesome women embracing their power, hints of men playing into those success-related gender roles remain. As Maureen O’Connor noted for The Cut a few years ago, some of Drake’s lyrics in the diss track “Back to Back” slammed Meek Mill by hinting then-girlfriend Nicki Minaj was more successful than him. The idea that Minaj’s success should say anything about how much of a “man” Meek Mill is, is obviously ridiculous, and yet it persists.

Even a look on Twitter shows women complaining with pretty high frequency about the issue in their own lives.

And the evidence of this type of professional sexism isn’t all anecdotal, either, and isn’t reserved exclusively to romantic partners. As pointed out by The Cut, a 2015 study by the Personality and Social Psychology Bulletin journal found that men were also more threatened by female superiors than male superiors in the workplace.

In Younger, Kelsey isn't searching for a long-term boyfriend. She isn't hoping for a lifetime partner. She is on an app for people interested in simple hookups, and even then, her career is a problem. This issue isn't imaginary, even if we aren't completely sure how frequently it crops up on hookup apps. The retrograde is harmful for all genders involved — women shouldn't have to downplay their ambition or professional success to appear more demure for a male partner, and men shouldn't feel like their "manhood" is measured in comparison to their female partner's success.

No one bats an eye when a woman dates someone who's had more professional success than she has — it's almost expected. A man in Kelsey's shoes would've been able to flaunt a flashy career on a dating app with no strings attached, and she simply couldn't. That's a problem for everyone.

More like this
Michael B. Jordan Tackled His "Public Breakup" With Lori Harvey On 'SNL'
By Brad Witter
You Might Want To Rewatch This Key 'On My Block' Scene To Understand 'Freeridge'
By Grace Wehniainen
A 'Terminal List' Sequel & Spinoff Are Reportedly In The Works
By Kadin Burnett and Grace Wehniainen
The 'Freeridge' Cast Shared Their Hopes For A Potential Season 2
By Grace Wehniainen
Get Even More From Bustle — Sign Up For The Newsletter
From hair trends to relationship advice, our daily newsletter has everything you need to sound like a person who’s on TikTok, even if you aren’t.