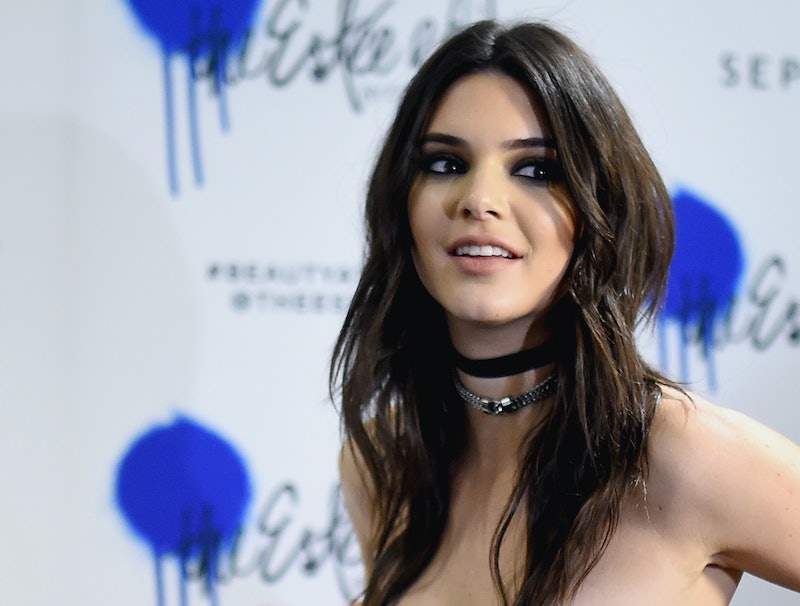 Uh oh, KoKo. In a July 4 video posted to her Instagram story, Khloé Kardashian caught Kendall Jenner and Ben Simmons snuggling by the pool — and it may have accidentally just blown up the rumored couple's spot, Access Online reported. There's definitely an emphasis on the "accidentally" part, though, because it's not like she zoomed in on them and added a caption like "GOTCHA" or something ... but, still.

Kardashian and boyfriend Tristan Thompson balled out for their second annual 4th of July party, and the new mom posted more than a few snaps from the scene of the shindig on her Instagram story. Most of the snaps shouted out the various restaurants, vendors, and brands the couple had on hand for the festivities, which included luxury pool floats, several kinds of booze, cookie and cake confections, an ice cream cart, and cheeseburger sliders from the famed Chef K.

One of the video clips focused on the party's emcee, who said audibly into a microphone, "Shout out to KoKo and Tristan. Second annual 4th of July party," while dancing by the pool. As the emcee moved around, though, he stepped to the side and — lo and behold — there was Kendall Jenner and rumored boyfriend, Ben Simmons, snuggled up and looking real cozy on the corner of an outdoor couch-bed. Gotcha!

At the time of publication, the clip had been up for more than 18 hours, and Kardashian had yet to take it down herself. Several other outlets (Us Weekly, People, Refinery29) have also spotted KoKo's "oops," so it's likely that Jenner and Simmons are aware that they've been outed by now. Does this mean they're cool with Kardashian having maybe, probably, accidentally confirmed their new-ish relationship?

Jenner, 22, and Simmons, 21 — who plays basketball for the Philadelphia 76ers — first sparked romance rumors towards the end of May, according to Page Six. A source told the publication that the pair had been dating "for a few weeks" before they were spotted at a few restaurants and clubs together in both Los Angeles and New York, but neither Jenner nor Simmons has confirmed that the rumors are true.

Jenner was also spotted "kissing, cuddling and drinking" with Anwar Hadid — the younger brother of Jenner's BFFs Gigi and Bella Hadid — at a CFDA Awards after-party in NYC a few days later on June 5, TMZ reported, but sources for the publication said that the two young models were just having some fun. Been there, understand that.

As for Jenner's status with Simmons post-Hadid, after word got around about them getting close at Kardashian and Thompson's 4th of July party, a source told People that they're just keeping it casual for now. "Kendall is having fun. She doesn’t want a serious relationship and is just enjoying being single," the source said.

“She feels that whenever she has been serious about guys in the past, it’s kind of a mess and doesn’t work out," People's source continued. "She invested time in the relationship with Blake Griffin. She isn’t planning on doing the same right now."

Jenner and Griffin reportedly dated for close to a year before seemingly splitting sometime before Coachella. Jenner alluded to her relationship with Griffin in an interview with Vogue published on March 14, but by the middle of April, the two were reportedly seen avoiding each other at a party in L.A., according to People.

It seemed like things were getting semi-serious between Jenner and Griffin for a while there, so it should come as no surprise to learn that she's just interested in playing the field for the time being. Whether or not things are taking an official girlfriend/boyfriend turn for the model and Simmons, though, it looks like there were definitely some low-key fireworks between them on the 4th of July.