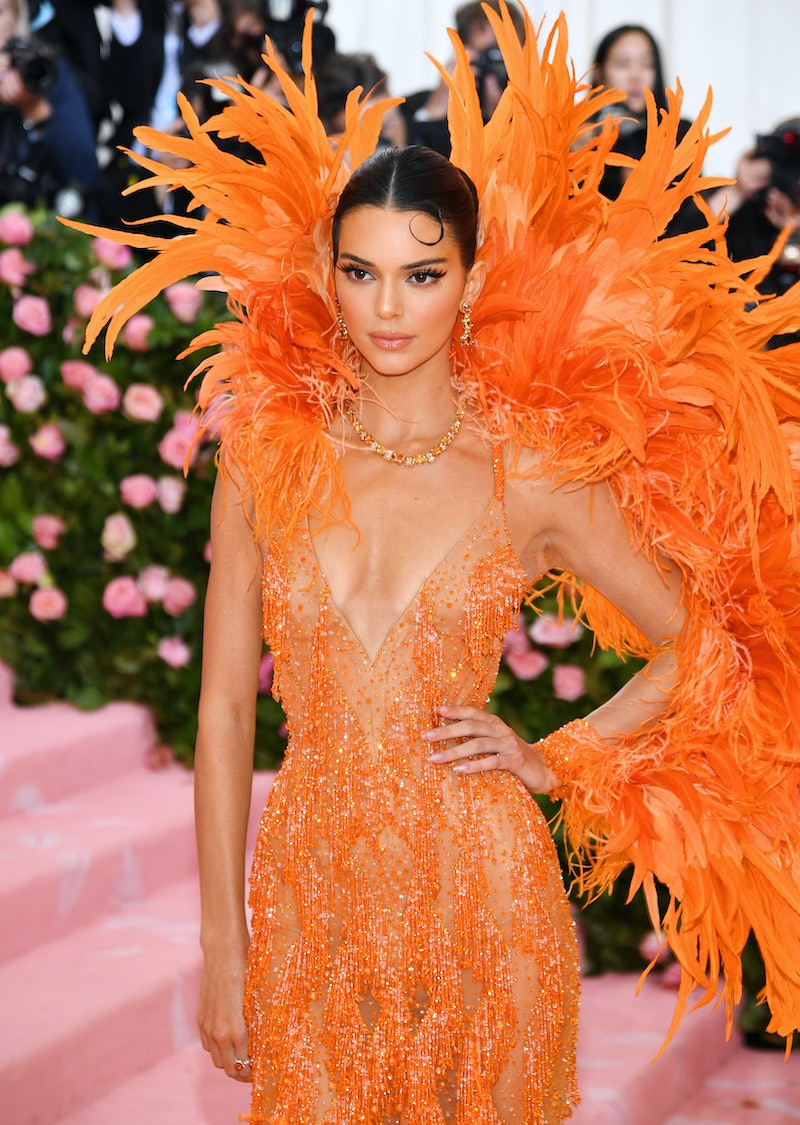 Kendall Jenner is a total Met Gala style maven. The model has attended every single Met Gala since her debut in 2014, never missing a chance to dress in a grand get-up for a theme. For this year's Camp festivities, Kendall Jenner's 2019 Met Gala outfit was a highlighter-orange gown outfitted with crystals and feathers. The look is basically school (and arts and crafts), but make it fashion.

For this year's Met Gala, Jenner wore a statement gown in a super saturated color. Channeling the neon trend of this season, Jenner rocked a highlighter orange gown with matching-hued feathers adorning the look. The feathers extended in a bright and bold collar around her neck while others peppered the bottom of her gown. Because if you need to Campify a standard gown, neon and feathers are the definitive way to do it.

To complement the stunning gown, Jenner wore retro-inspired hair and simple makeup, which is clearly her red carpet signature. Jenner's hair was pulled back into a sleek bun with wisps of hair curled on her forehead in flapper-esque fashion. The model also wore a chunky diamond necklace that accentuated the low-cut neckline of her outfit.

All in all, Jenner was a tamer fashionista for the night's gaudy Camp events, taking on the eccentric theme with a careful and conservative eye. But the model certainly turned heads by simply being the style star we've come to expect — especially throughout her Met Gala history.

Though Jenner was a style standout this year because of her bold color choice, it isn't the first time she's landed on the Met's best dressed list. Just take a look at her best Met Gala looks through the years.

To the festivities last year, Jenner wore a lengthy cream jumpsuit with an off-the-shoulder neckline. Accessorized with sheer gloves, a sleek ponytail, and crystal earrings, Jenner embodied the heavenly ethos of the Met's 2018 theme.

In perhaps her most infamous Met Gala look, Jenner rolled up to the 2017 fashion carpet in a daring, sheer black dress. With a red lip and a messy lob, Jenner turned heads for the Comme des Garçons theme.

For 2016's gala, Jenner wore a Versace gown with a laser cut-like pattern in whites and blues. The gown was created as a subtle nod to the "Manus x Machina: Fashion in an Age of Technology" theme.

Jenner wore a green Calvin Klein beaded gown for the Met's "China: Through the Looking Glass" theme in 2015.

For her first Met Gala, Jenner opted for a simple cream dress by Topshop (yes, that Topshop) for the Charles James theme. The gown was, by far, her most understated showing, but a gorgeous look.

Jenner is a Met Gala veteran at this point, turning heads year after year in exciting glamorous looks. For 2019's grand Camp theme, the model certainly kept her fashionable tradition alive. After all, you'll never look at highlighters the same way again.

More like this
Kate Had A Solution When Tom Cruise Broke This Royal Rule At The 'Top Gun' Premiere
By Frances Stewart
All Of Kourtney Kardashian’s Wedding Dresses
By Allie Fasanella
10 All-Denim Outfits Inspired By Billie Eilish, Bella Hadid, & More
By Allie Fasanella
Megan Thee Stallion Just Brought Back 2004's Favorite Handbag
By Dominique Norman
Get Even More From Bustle — Sign Up For The Newsletter