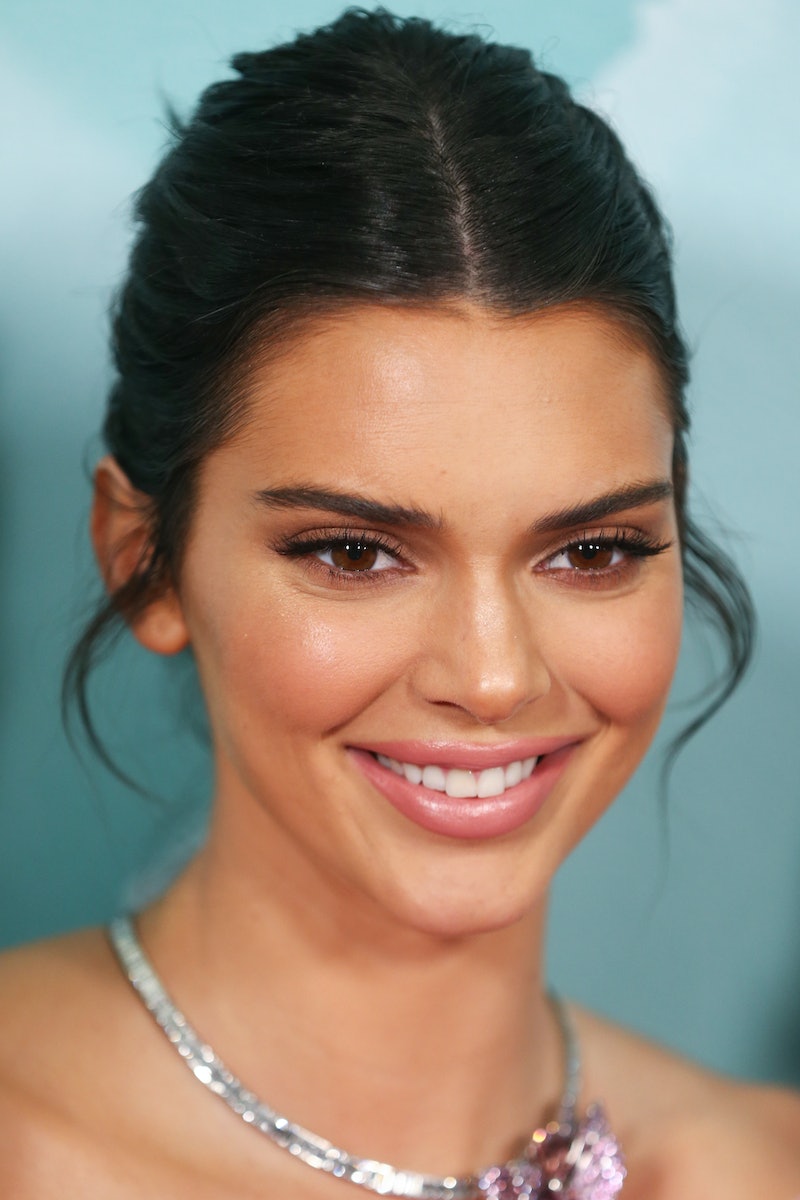 Kendall Jenner's sisters have started their own families, but the model is just fine on her own. At least, that's the cheeky message Kendall's Kardashian family portrait seems to convey. The photo, posted on Instagram by Kendall on Friday, April 26, shows a rare look at almost everyone in the Kardashian-Jenner family, including most of the next generation of KarJenner children.

The photo Kendall shared features pretty much all of the major players in the mega-famous family. There's Kim and Kanye, along with their three kids, Kourtney with two of her kids, Khloé with baby True, and Kylie and Travis Scott with little Stormi. Kris Jenner is perched on the side of the couch, too. And even her boyfriend, Corey Gamble, is in the family picture next to her.

With all of the babies and kids in the picture, it's understandable why Kendall would want to make a playful joke about it. Her sisters are all holding their children on their laps, while she simply has her legs crossed and is smiling at something off-camera. So in a second image in the Instagram carousel, Kendall made her thoughts about having kids — or, at least, having kids anytime soon — abundantly clear.

Kendall posted a meme showing someone with a plastic bag over their head, presumably to prevent airborne illness, captioned, "Pregnancy is in the air. Me:", indicating that Kendall isn't planning to have kids anytime soon.

As much as Kendall loves being an aunt, it doesn't look like she has plans for children of her own in the near future. But the photo shows how much she loves her ever-growing family, and it's sweet that she's the one who shared the photo.

This might be the biggest group shot of the Kardashian-Jenners in months, especially with Corey, Travis, and Kanye all present for the picture. It's also nice to see a photo that's not overly staged — the family looking at each other or away from the camera gives an insight into how they actually live their day-to-day life. (And North's power pose in the back is just too cute.)

Kendall's post isn't the first time she's joked about being childfree, either. Back in November, Kendall posted a photo of herself alone on a beach towel, writing in the caption, "all my siblings posting their babies and sh*t and i’m just like..." Clearly, she doesn't feel like she's missing anything by not having a baby. And she's not afraid to remind her fans (and family members) of that fact with some cheeky Instagram posts.

Of course, Kendall still has plenty of time to become a mom if that's something she's interested in down the road. And if it isn't, she's perfectly content doing a bit of trolling of her siblings' Instagram photos of their families. Kendall is just living her best life, and she's definitely not falling prey to comparing herself to any of her sisters. She's happy with her life just the way it is, no kids and all.