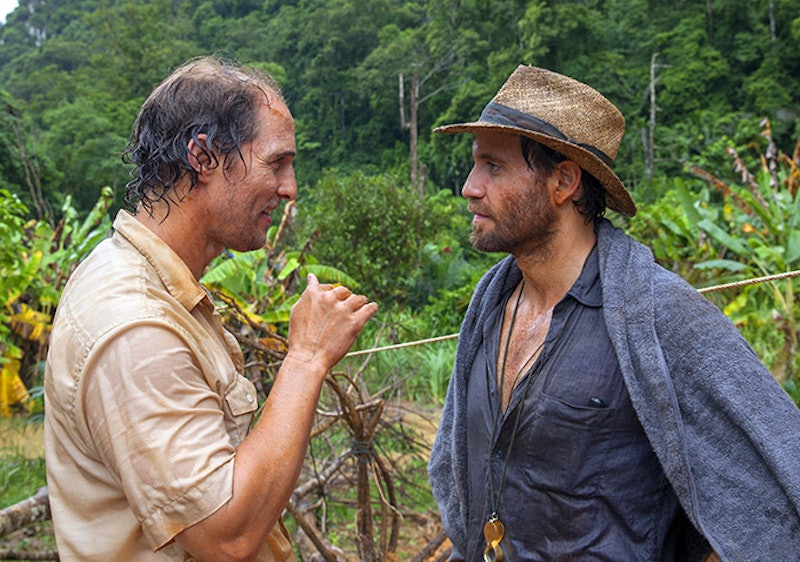 Is there a more appropriate movie for 2017 than Gold? The Matthew McConaughey movie about a gold-obsessed businessman with questionable ethics who becomes embroiled in scandal hits theaters exactly one week after a gold-obsessed businessman with questionable ethics who is embroiled in scandal was sworn in as the 45th president of the United States. And while Donald Trump is very real, Kenny Wells from Gold is not a real person — at least, mostly.

While it's true that Wells is a fictitious entity, the character was actually based upon a very real person by the name of David Walsh, and the movie is inspired by the Bre-X scandal that defined his legacy. Walsh was a penny stock promoter who founded Bre-X Minerals, a tiny Canadian mining company, in 1989. The company was not successful for its first four years in business, but its fortunes changed when Walsh and a geologist named Michael de Guzman (Michael Acosta in the film, played by Edgar Ramirez) decided to purchase land in Indonesia that they believed could hold a potential goldmine in 1993. They then reported that they had discovered a tremendous amount of gold in the area, and the company's worth rose to several billions by 1997. But its success was short-lived.

Things went south after an independent third-party started their own investigation of the amount of gold in the Indonesian mine. After they began sniffing around, de Guzman killed himself by leaping from a helicopter, which caused a much higher level of scrutiny around the company. Soon after, it was revealed that Bre-X's Indonesian mine, which supposedly contained billions of dollars worth of gold, was practically gold-free, and basically worthless. Not only that, but it also came out that Bre-X didn't make an innocent mistake in their inflated claims — the company had falsified its earlier gold findings.

Bre-X's stock tanked, it faced a number of lawsuits from investors who felt cheated, and it filed for bankruptcy before the end of 1997. Walsh maintained that he was innocent of any wrongdoing, claiming that any fraud was done without his knowledge by other members of the company. No criminal charges were filed in the case, and Walsh himself passed away from a brain aneurysm in 1998.

The story is a well-known scandal in Canada, but most Americans aren't familiar with it. And given that Gold changes the names of the company, characters, and events, it's possible that David Walsh and the Bre-X company will remain unfamiliar names to many in the U.S. even if the movie is successful.