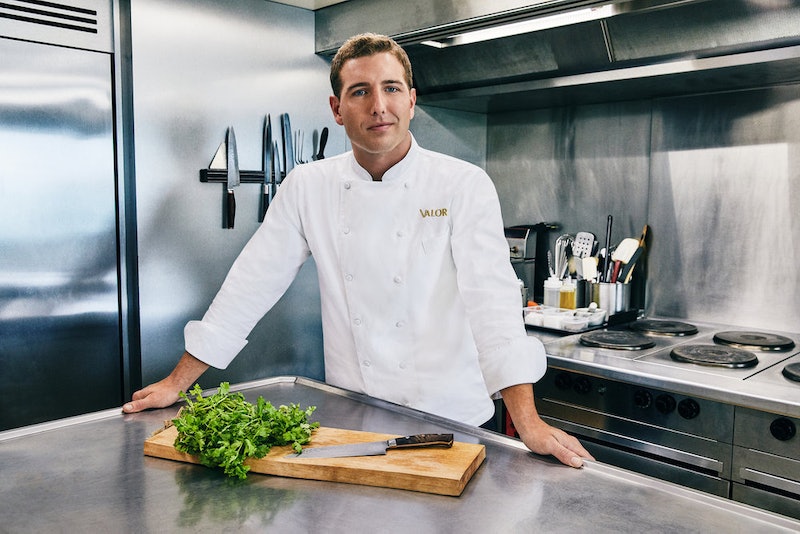 According to Kevin's Bravo bio, he started his career in food when he was just 12 years old. He started working at a local bakery and later went to culinary school at 14. Cheatsheet reported that, from there, he took his skills on the high seas. By age 24 he was cooking on yachts as big as 450 feet. Still, he told Cheatsheet that he never experienced pressure like he did on Below Deck, where his every move was filmed to later be scrutinized by an audience at home. "The pressure to perform was something I had never experienced before, every move of mine was being watched," he said. "I mean if you burn something everybody is going to know about it, which I kind of liked, as it keeps you on your toes."

Only a true master of the kitchen would like the added pressure of a film crew. And since not everything he does on the show makes it to air, he's also taken to showing some of the behind the scenes of the ship's galley on his Instagram.

This is what the charter guests aboard the Valor get every morning.

Kevin said on Instagram that guests arriving aboard the yacht all get these yummy summer spring rolls with a Thai dipping sauce. What a welcome.

Kevin Can Cook One Of The Hardest Culinary Dishes

Any Gordon Ramsay fan knows the trials and tribulations of cooking a Beef Wellington. There's no way of knowing if it's cooked properly until it's sliced open. Based on this cooked-to-perfection picture, it looks like Kevin knows what he's doing with this dish. "Always excited to cut through these, it’s like Christmas when you get it perfect," he captioned the photo.

He Cooks With Gourmet Ingredients

Square watermelons can go for around $200 per fruit, but Kevin's just such a fancy chef that he's gotten to use one. However, according to him, "This one tasted like a**."

When Kevin's sister asked him for a lamb shank recipe, he decided just to give it to all of his followers too.

He Has A Daughter & She Shares His Love Of Food

According to his Bravo bio, Kevin flies home whenever he can to be with his little girl. Here they are sharing a yummy Pho meal before a flight.

More like this
Brooklyn From 'The Bachelor' May Have Accidentally Predicted Her Time On The Show On IG
By Grace Wehniainen
'Love Island’s Kai Fagan Is Very Clear About What He Doesn’t Like
By Sam Ramsden and Darshita Goyal
This ‘Bachelor’ Contestant is Grocery Joe’s Pick For Zach’s Top 4
By Grace Wehniainen
Kaity's 'Bachelor' Fate May Be Foreshadowed By This Beyoncé TikTok
By Grace Wehniainen
Get Even More From Bustle — Sign Up For The Newsletter
From hair trends to relationship advice, our daily newsletter has everything you need to sound like a person who’s on TikTok, even if you aren’t.