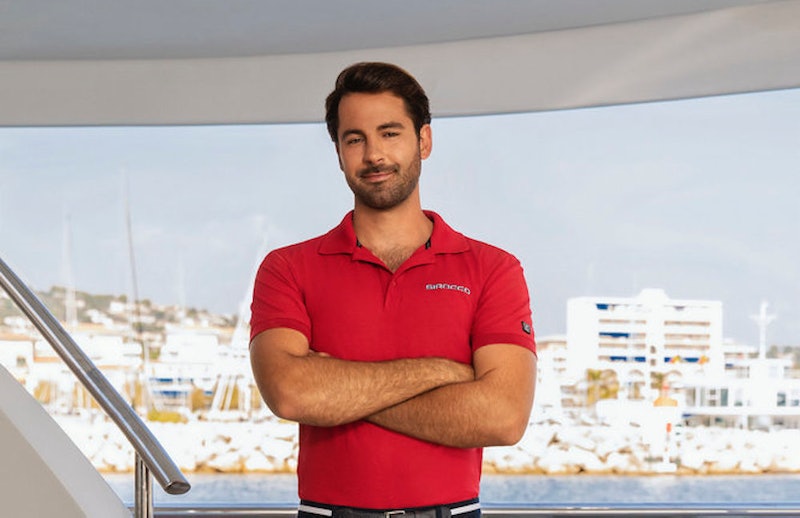 Below Deck Mediterranean has always been filled with quite a character-driven cast. These people know how to work hard, sure, but most importantly they know how to have fun. Especially this season's deckhand. Travis' Instagram shows that this Below Deck Mediterranean star is pretty much all fun all the time. And, sure, no one really posts boring stuff to Instagram, but Travis' photos are over-the-top zany.

He's a big proponent of dressing up while sailing on the high seas, so it's a shame he has to wear a uniform on board the Sirocco. It's honestly stifling his truest costumed potential. Most notable on his Instagram, however, are his lengthy, confusing, sometimes overwhelming captions. I don't know what it is about this cast, but they love a long caption. Aesha is also part of the long caption club, but hers differ from Travis' in a major way.

Aesha's captions are often full of motivating, empowering advice, and Travis' are... a lot. For example, here's what he captioned a pretty photo of the ocean and some mountains.

"I haven't posted in ages coz I’ve been very busy doing absolutely f*ck all except enjoying my god damned life so here’s a pearler flickeroono of airlie from a big old hill on a trail known as the honeypot, hehe stop it no you stop it hehehe I’m f*ckin knackered. Xoxo"

Like, what even did I just read? With Travis' posts, the picture may be worth a thousand words, but his captions are even more. Here are some of the most telling photos from his timeline that show off his wacky personality.

He's Not Afraid Of Heights

Or, rather, he's not afraid of heights anymore. His caption for this high dive photo is, "I used to be rather scared of heights and then I taught myself that such emotion was reserved for p***y a** little b*tches so I started to jump from high thing to fight the inner little b*tch and now days I’m much less of a little b*tch." Alrighty then.

He Likes To Have Fun With His Hair

Gotta pass the hours on a boat somehow.

He'll Even Make Fun Of Himself And His Hair

OK, he totally does look like Lord Farquaad there. Maybe go back to the ponytails?

He said he shaved "from eyebrows down for the full commitment" on this look.

He's Been A Mermaid

He's on the water, so it's fitting.

Most Of These Costumes Happen On A Boat

He should start his own costumed charter.

Why let such a fun costume not be used more than once, huh?