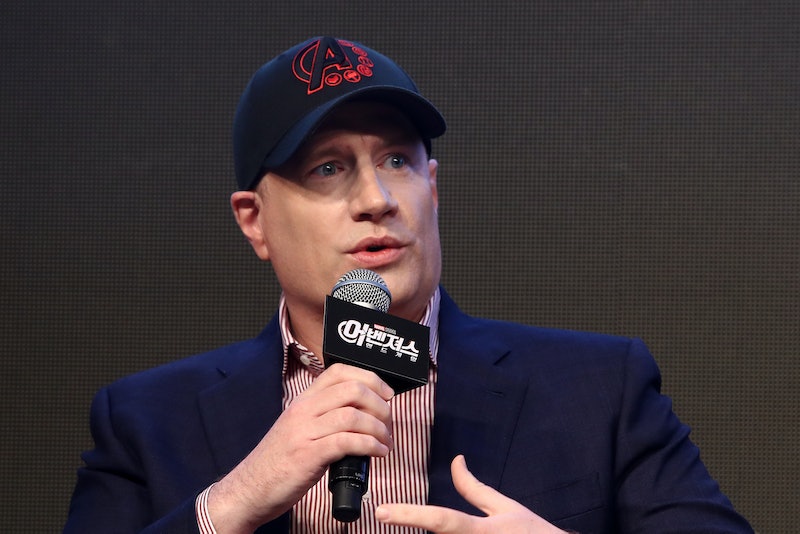 Marvel Studios President Kevin Feige is the godfather of the modern superhero movie. But after a decade building the Marvel Cinematic Universe, he's ready to branch out into a whole new franchise. It was announced on Wednesday, Sept. 25, that Feige is currently developing a new Star Wars film. And, as if that weren't exciting enough, rumor has it that Kevin Feige’s Star Wars movie could feature a Marvel actor, officially bringing the MCU to a galaxy far, far away.

Disney confirmed on Wednesday that Feige would be signing on to develop a new movie in the Star Wars franchise, per The Hollywood Reporter. Walt Disney Studios Co-Chairman Alan Horn confirmed Feige's involvement in a statement, noting that the MCU mastermind would be working on the next chapter of Star Wars, now that this first reboot trilogy was wrapping up. "With the close of the Skywalker Saga, Kathy is pursuing a new era in Star Wars storytelling," he said. "And knowing what a die-hard fan Kevin is, it made sense for these two extraordinary producers to work on a Star Wars film together."

Moreover, according to Collider, there are rumors that Feige might take over Lucasfilm after Kathy Kennedy's time as president of the studio is up in 2021. She renewed her contract for that position in 2018 for three more years, according to THR, but it's unclear whether she intends to extend it beyond that. And, with the MCU well-established at Marvel Studios, it's entirely possible that Feige would feel comfortable leaving one franchise for another.

After Episode IX: The Rise of Skywalker, the saga of the Skywalker family will be done for good, opening up the galaxy brand new stories. And while there's no word on what Feige's Star Wars movie will be about, there are rumors that he already has a star in mind. A source reportedly told THR, "Feige has told a major actor that there’s a specific role he would like that person to play if and when he makes the movie." And fans are already convinced that the actor in question is one Brie Larson.

Larson has worked with Feige before on Captain Marvel, meaning they already have a successful working relationship. Moreover, she's also a huge Star Wars fan. During an Entertainment Weekly interview in February, the Oscar winner recalled geeking out when her Captain Marvel co-star Samuel L. Jackson brought his Mace Windu lightsaber to set one day. "It’s so cool. I wish I was a Jedi," Larson said. "I got to hold his lightsaber! He brought it to me on set on May the 4th, and I cried. It was so cool. I wanna be a Jedi."

And fans are already thrilled at the idea of Larson joining the Star Wars universe.

As for whether it would even be possible for Larson to star in both the MCU and Star Wars, the facts speak for themselves. She wouldn't be the first actor to split her time between two massive franchises. Most notably, director Jon Favreau has been working on Disney+'s The Mandalorian while starring in the MCU as Happy. Clearly, the Force is stronger than any tough scheduling.