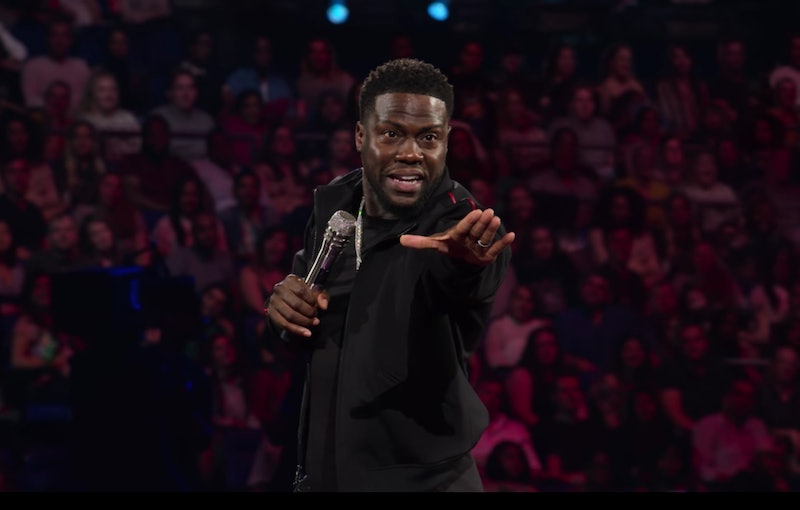 Throughout the entirety of Kevin Hart's new Netflix special, Irresponsible, he doesn't utter the word "Oscars" once. It's not entirely surprising: the special was filmed before the controversy unfolded, so logically, he couldn't have talked about the Oscars. It does, however, feel especially odd to be watching it now, given the content.

In December 2018, homophobic remarks Hart tweeted in 2011 resurfaced, sparking backlash and eventually leading him to step down from hosting the 2019 Oscars. According to People, Irresponsible was filmed at the O2 Arena in London during Hart's tour of the same name, which per the O2's website, was in September 2018 — before his tweets resurfaced. So, you can't knock Hart for not addressing something that, at least when he filmed the special, hadn't even happened yet.

But it does seem like, even before the Oscars controversy, past mistakes were on Hart's mind. "I don't like it when people act like you plan to f*ck up," he jokes early on in Irresponsible while discussing his marriage. "You don't walk outside like, 'Today is the perfect day for a f*ck-up ... This is f*ck up weather, that's what this is." He adds that he understands he's opened himself up to a public platform and the opinions that come with it, but that, "what makes me laugh is when people act like they live my life."

Initially, it comes across as a little defensive, as have his apologies regarding his tweets. But he later reflects on how his past missteps have changed him. He recalls looking at himself in the mirror and thinking, "You're almost 40 years old. You're still doing the same dumb sh*t. Grow up." And he urges his audience to "embrace your flaws and f*ck ups because they help make you who you're supposed to be. Don't run away from your bullsh*t. Embrace it and become better."

Taken at face value, that sounds like a man who's dug deep and done the work to become a better person. But in light of a recent interview Hart gave to Vulture, it feels like an empty sentiment. The comedian has, at this point, apologized multiple times for his homophobic comments, and to his credit, he does seem to understand how damaging they were to the LGBTQ community. However, he's also expressed frustration that people didn't cut him slack simply because he was unaware about "the issues and problems that people have suffered from" for being themselves, and for failing to acknowledging how he'd already changed since making those comments.

"I'm not asking for the emotions to be buried behind the statement for others that that may have hit close," he told Vulture. "I'm asking for the understanding and acknowledgement of someone being ignorant to what is going on and to simply think that his apology from old should have been good enough." (That he's still so stuck on his past apology — the existence of which is debatable — is the most telling.)

So while Hart's Vulture interview makes clear that he's had some insightful discussions about what happened — and yes, perhaps learned something from them — it feels odd to watch him spend an hour preaching about self-reflection and growth when he's still so publicly struggling to do those things himself. You could argue that growth is an ongoing process, that no one is perfect, and that's true. But if half of the world is screaming at you and you still won't fully listen, at the very least, you shouldn't release a Netflix special about how much you've changed. Hart still isn't taking full responsibility. He's still making excuses. He's still shifting the blame.

Hart told Vulture that "of course" he will talk about the Oscars controversy and what he's learned from it in future stand-up routines, so perhaps those will leave less to be desired. But until then, Irresponsible is a pretty fitting title — regardless of when it was filmed.