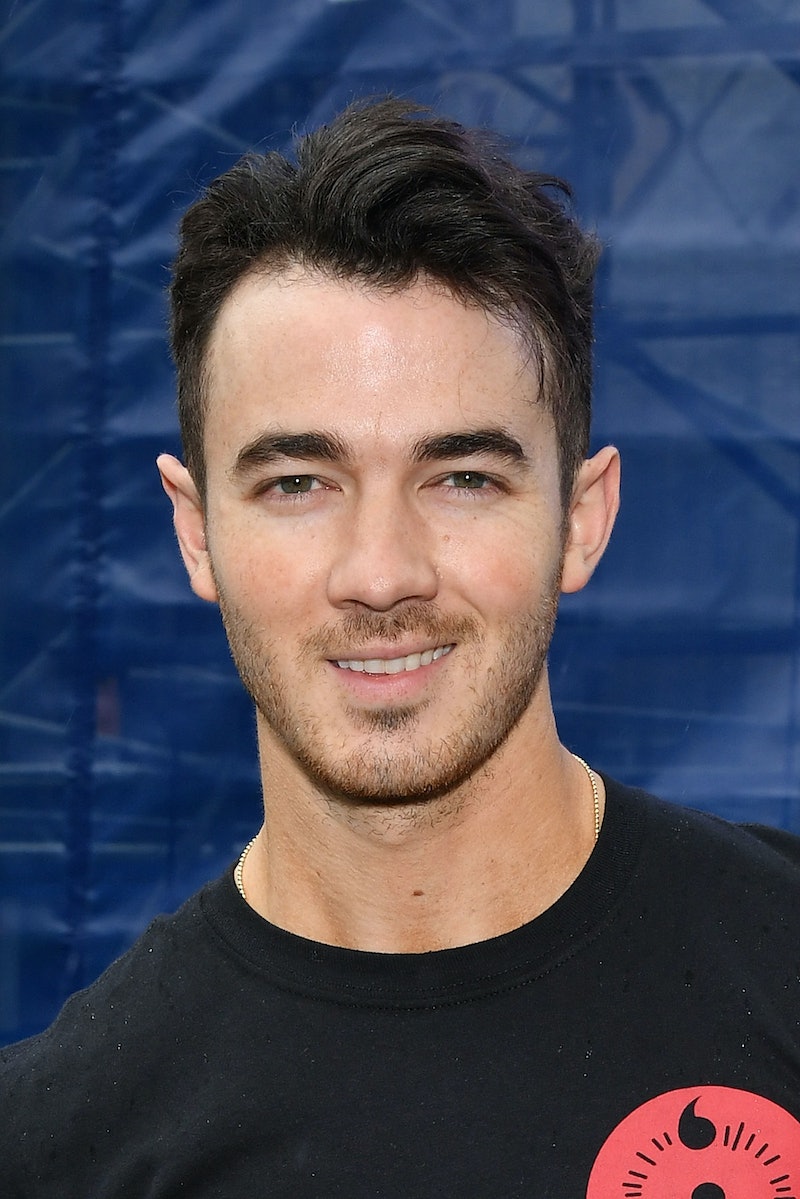 Nick Jonas wasn't the only one whose life was changed when he got involved in a whirlwind romance with now-wife Priyanka Chopra. Kevin and Danielle Jonas' daughters Alena and Valentina now have a new aunt, but it wasn't an easy transition — at least for one of them. In fact, Nick Jonas' niece Valentina had beef with Priyanka Chopra at first. But don't worry, it sounds like they're all good now.

Nick, Kevin, and Joe Jonas appeared on the March 4 episode of The Late Late Show With James Corden to discuss the mini feud. Well, they actually appeared to promote the Jonas Brothers comeback and their new single "Sucker." But still, the short-lived beef was discussed. Host James Corden told Kevin, "You have two beautiful daughters. Do they approve of the new additions to your family?" Of course, this was in reference to Nick's new wife Priyanka and Joe's fiancée Sophie Turner. (Kevin didn't mention Sophie at all in his response, which is probably a good thing in this instance.)

The eldest Jonas Brother confessed, "They definitely do now. At first, it was a little rough going for my youngest daughter Valentina. She's very connected to Nick." Which basically means Priyanka did not get a warm welcome from the 2-year-old.

Kevin recalled, "When she met Priyanka, she put her arm around his shoulder." Uh-oh. He continued, "Every time her hand would go around and he was holding Valentina, she would just push it off. Every time. Just like, constantly." Poor Priyanka!

Nick chimed in to declare, "She's very territorial." It makes sense, since he seems like a very dedicated uncle. Kevin concluded, "It just became an ongoing joke. I'm not sure Priyanka loved it at first, but they're cool now." Thankfully, this one-sided feud didn't get any worse.

Nevertheless, on Jan. 29, Times Now News reported that Priyanka shared a photo of Nick holding Valentina on Instagram Story. She jokingly captioned the picture, "Fair to say she's possessive of uncle Nick. #stinkeye for me." Nick posted a photo from that same day and referred to Valentina as his "precious niece" with no mention of Valentina's comical beef with his wife.

It's clear that Nick tries to spend a lot of time with his nieces, so hopefully Valentina has warmed up to her new aunt. And if she hasn't, it's bound to happen soon, right?

In December 2018, Uncle Nick shared a photo of Valentina and Alena "teaching" him how to play piano. Do the fans have the two nieces to thank for the Jonas Brother comeback? Maybe this time on the piano got Nick amped up for another family recording session.

And of course, Nick gave Valentina a special birthday shoutout in October 2018.

Even though it has to suck to get rebuffed every time you put an arm around your own husband, it's at least a little bit endearing that Nick is such a beloved uncle. Plus, it's the most adorable feud Priyanka could possibly have. Let's just hope that Valentina has given the Quantico star the chance to become a beloved aunt.