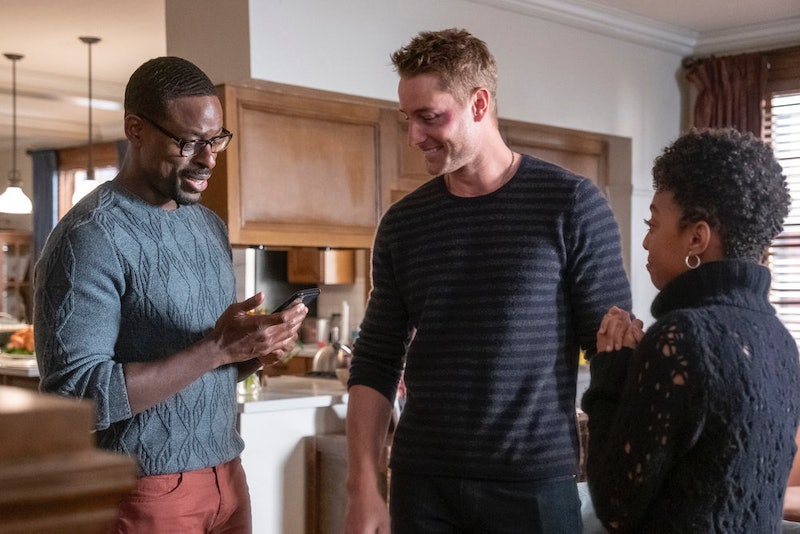 Spoilers ahead for the This Is Us Season 4 midseason finale. Nothing gold can stay on This Is Us, because now Kevin and Randall aren't speaking. Actually, the way Kevin put it, no one from the Pearson family is talking to Randall. In the flash forward at the end of the Thanksgiving episode, Kevin and Kate were celebrating their 40th birthday. A confused Rebecca asked if Randall was there yet, and Kevin was forced to explain (for the umpteenth time it sounded like), "No, Mom. Randall's not coming. We're not speaking, remember?"

Obviously Rebecca did not remember, but she seemed to after Kevin reminded her. She didn't protest or ask any follow up questions, which made it seem like she understood why Randall wasn't speaking to them. Viewers don't understand at all, though. The flash forward takes place nine months after the events of Thanksgiving, where everyone seemed to be a big happy family. What could have gone wrong in that short amount of time?

For one, it's not clear who is mad at who in this scenario. Is Kevin not speaking to Randall? Is Randall not speaking to Kevin? The fact that Kate, Rebecca, and Miguel are there with Kevin seems to suggest that they've taken Kevin's side in this argument. Perhaps, for a fun change of pace, Randall is at fault here instead of Kevin.

There are a couple of big changes in their lives in the flash forward that could have contributed to a breakdown of communication in the Pearson family. The obvious one is that Rebecca's confusion has escalated pretty dramatically. Since Randall was the one Rebecca opened up to on Thanksgiving about having memory problems, maybe Kate and Kevin disagreed with Randall about Rebecca's potential treatment. Maybe Randall kept Rebecca's prognosis from them for a long time and they're angry about that. The other big change is that Kevin has a fiancée in the flash forward, and she's expecting a baby. Maybe Kevin and Randall don't agree with Kevin's choice of fiancée?

Kevin and Randall have not always been on the best of terms. They had a tenuous relationship growing up, which bled into their adult lives — especially in the first season. But they've come so far since then, it's hard to believe they're in such a bad place that they can't even set it aside for their milestone 40th birthday. And, even when Kevin and Randall were fighting, Randall and Kate have always been on good terms. What's happened to cause Kate to also not be talking to him, or to at least take Kevin's side in the matter — which is what her presence at Kevin's side suggests she's done.

Whatever the reason for their estrangement, that flash forward was pretty devastating for fans. Sterling K. Brown, who plays Randall, knew that was coming. "The fans are gonna be upset," he had teased in an interview with KSDK before the mid-season finale aired. "We're gonna leave [fans] like six or seven weeks before we a chance to see what happens next. But when we come back, they're gonna go on a rollercoaster ride."

Brown couldn't get into it much about what happens, but he did preview the familial tension that viewers learned about in the flash forward. "There's some tension that develops within the family," he said. "So, there's Rebecca, there's Kevin, Kate, Randall, something happens in the present day that causes people to sort of fall away from one another a little bit. That's really all I can say." He added that this storyline would be further explored when the show returns in the winter. "There's some big things that are happening going into the back half of this season," Brown teased. Creator Dan Fogelman told Deadline the same. "When we have these midpoint episodes, people will get a lot of answers to some things they've been asking about, or a lot of half answers that will be answered [later in] the season."

Because this flash forward is only nine months in the future, it's likely that we'll get answers about Kevin and Randall's feud in the second half of Season 4. That doesn't mean we'll like the answers we'll get, but at least they're coming... in, as Brown said, six or seven long weeks.