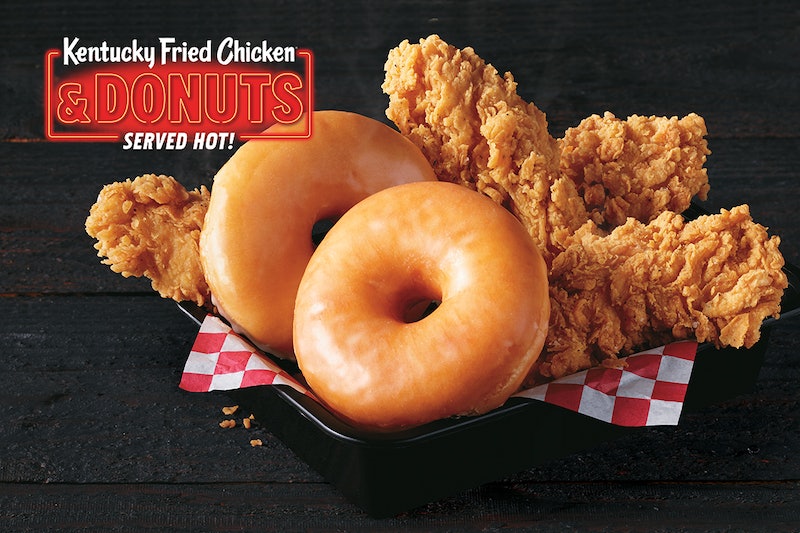 You’ve no doubt heard of chicken and waffles, but, hey, fun fact: Chicken and donuts is a thing now, too. What’s more, the savory-sweet combo is apparently finally going mainstream, as evinced by the fact that KFC is testing a Chicken & Donuts menu right now. The test is only occurring in two states, though, so if you want to give KFC’s take on the trend a shot, you’ll have to go to either Virginia or Pennsylvania to do it. Here’s what you need you need to know — and exactly where you have to go within Virginia and Pennsylvania to get your hands on this treat.

Don’t want either of the specific Chicken & Donuts meals, but do kind of just want a donut all on its own? You can make that happen, too. According to the press release, you can add a donut to any meal for $1 at the KFC locations participating in the test. The specific areas in which the test is occurring include the Norfolk/Richmond area of Virginia and the Pittsburgh area of Pennsylvania.

Things I only just learned, by the way, include the fact that there’s actually a name for a sandwich that uses donuts as the bread: It’s called a Luther Burger. As you may have surmised, usually the moniker is applied specifically to burgers; per Snopes’ fact check on the item, which is named after Luther Vandross, it’s traditionally “a bacon cheeseburger served on a Krispy Kreme donut bun.” KFC’s Chicken & Donuts Sandwich can, therefore, accurately be described as a Luther Sandwich — that is, it’s basically a Luther Burger with the burger patty swapped out for a breaded piece of chicken.

If you don’t happen to be anywhere near Virginia or Pennsylvania, the good news is that a growing number of bakeries and restaurants have been picking up the chicken and donuts trend in recent years. In California and Washington D.C., for example, there’s Astro Doughnuts & Fried Chicken; in Philadelphia, there’s Federal Donuts; in Chicago, there’s Do-Rite Donuts & Chicken; and in Houston, there’s Sam’s Fried Chicken & Donuts, to name just a few.

But if you are based around the Norfolk/Richmond part of Virginia or in or near Pittsburgh, Pennsylvania (you lucky duck!), here are the KFC locations participating in the test. (Note, though, that you may want to call ahead to make sure they’ve got the items in stock before you go; things do sell out when they’re popular, after all. See also: KFC’s plant-based “chicken,” which sold out in just five hours.)

Head to any of those KFC locations to give the Chicken & Donuts items a shot. They’re available starting on Sept. 16. No end date has been announced; there's also no guarantee that the items will get a wider release. So, hey, may as well give them a try while you can, right? Good luck!