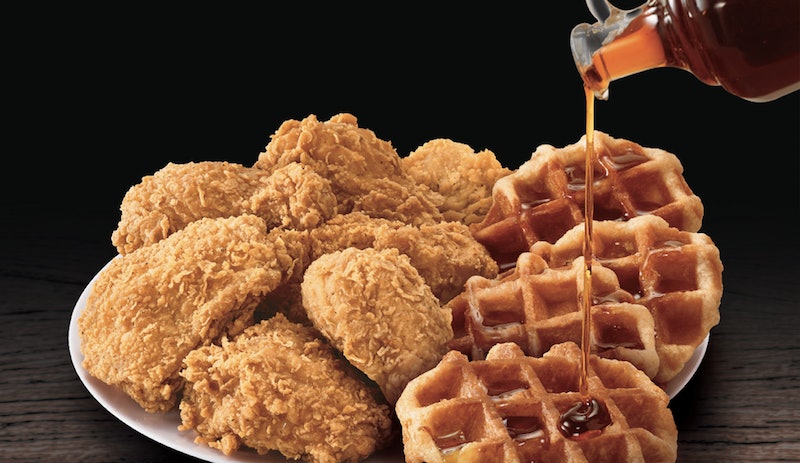 And today in news that has many shouting, “Well, it’s about dang time!”, we have this: KFC is testing chicken and waffles. (What? Did you really think pickle fried chicken was the only thing KFC had up its sleeve right now?) There is, of course, a catch, though; because it’s a test, KFC’s chicken and waffles are currently only available at a few locations. If you’re in Asheville or Charlotte in North Carolina or Greenville in South Carolina, good news — you’re probably near one of those locations. If not, though? You’re out of luck. If you’re conveniently situated where the test is occurring, Thrillist reports that the menu item will be available between June 18 and July 29 — so, uh, want to do us all a favor? Head on over to a KFC that has it and report back about how it is. Inquiring minds need to know.

According to the Charlotte Observer, the waffle in question is closest to a Belgian waffle, thick and square shaped; for the chicken, meanwhile, you’ve got a few options: You can either get two pieces of bone-in dark meat chicken served up as either a leg and a thigh or a thigh and a wing, or you can get two hefty boneless chicken tenders. Mrs. Butterworth’s syrup is served alongside it, although you can also ask for hot sauce — which Charlotte Observer writer Kathleen Purvis recommends. You can expect to spend between $5 and $6 for the menu item; the price, as is often the case with major chains, varies depending on the market.

This isn’t the first time KFC has tried out a waffle-related menu item; earlier in 2018, the Waffle Double Down — a redesigned version of the original Double Down launched in 2010 — arrived in Canada, introducing us to what was essentially a chicken-and-waffles sandwich. With two pieces of chicken functioning as the “bread” and the filling consisting of a Belgian waffle anointed with maple aioli, however, the ratio of chicken to waffle feels a little… uneven (to me, at least), so perhaps it’s unsurprising that the chain would finally just go for a straight-up chicken and waffles option.

Indeed, said KFC U.S. Senior Marketing Director Mike Wesley in a statement released to multiple outlets, “We know that chicken and waffles has a cult following across the country, especially in the south, but not everyone has it available close by. We are always looking to add new menu items and Chicken and Waffles is perfect for our next test market product. We’re excited to hear what North Carolinian taste buds have to say.”

Interestingly, though, chicken and waffles isn’t really a Southern invention. There’s some debate about the history of the dish; it’s true that a version has existed in Pennsylvania Dutch country since the 1600s, but that version isn’t what most of us think of as chicken and waffles: It involved stewed chicken and a savory, creamy gravy. When it comes to fried chicken and waffles, some point to the Los Angeles institution Roscoe’s as the originator of the dish — but that’s not quite right, either. Fried chicken as we generally understand it today actually originated at Wells' Supper Club in Harlem, New York during the Harlem Renaissance. As documentary filmmaker Rochelle Brown observed at Ebony in 2016, “People seem confused and deprived regarding the backstory of a lot of our culinary history. There is so much misunderstanding [that] even the average Black person swears Roscoe’s in Los Angeles developed fried chicken and waffles, but it opened decades after Wells’.”

Chef and restaurateur Marcus Samuelsson described in 2014 how closely tied to the jazz world chicken and waffles ultimately are:

“During the Harlem Renaissance, the music scene was hot and heavy. Musicians like Cab Calloway, Duke Ellington and Fats Waller were playing to standing room-only audiences at a number of well-known uptown venues like The Cotton Club and The Savoy Ballroom. After a late night set, these hungry musicians would head out on Lenox Avenue or 135th Street looking for a place to eat, but most spots typically stopped serving dinner at 11 p.m. — a full hour before most jazz sets concluded. Wells’ Supper Club on Adam Clayton Powell Boulevard began to offer late night dinner service for these musicians, and that after-midnight, pre-dawn meal was chicken and waffles.”

It was, noted Samuelsson, “the unusual combination of savory and sweet, soft and crunchy” that made the dish “an immediate hit” — and soon others began to serve their own versions of it all day long. It did eventually become a staple of soul food, although as John T. Edge, author of Fried Chicken: An American Story told NPR in 2013, “[Chicken and waffles] is a Southern dish, but a Southern dish once or twice removed from the South.” In LA, the first Roscoe’s opened in 1975, bringing chicken and waffles to the West Coast.

So: How does KFC’s version of chicken and waffles stack up? According to Kathleen Purvis at the Charlotte Observer, the “boneless tenders are easier to cut up and combine with a forkful of waffle,” but she actually suggests folks go for the bone-in option. “It has more flavor,” she writes, “although at KFC, that flavor is all about the thick fried crust with the 11 herbs and spices.” She also notes that the waffle is chewy, rather than crispy, and not very sweet on its own; it does, however, have a little bit of butter flavor to it. The key, apparently, is in the toppings: “Drizzle hot sauce on the syrup, and she becomes a very sassy lady,” writes Purvis.

No information is currently available about which particular KFC locations in Greenville and Asheville have the item; in Charlotte, however, participating locations include the ones at 321 E. Woodlawn Road and 1101 N. Wendover Road, according to the Charlotte Observer. Godspeed, my waffle-loving friends; it sounds like you’re in for a treat.