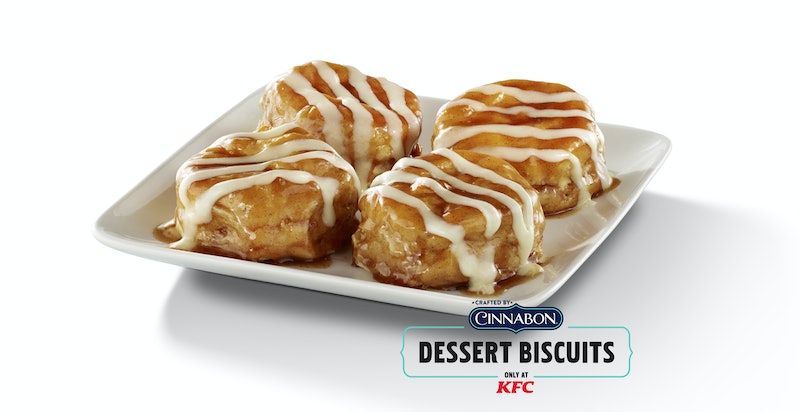 Have you ever had that thing happen where you have two really great friends from two completely different friend groups, and then they meet each other, and you're like, "Oh my god, why didn't I realize it sooner, you two should totally date"? Because if not, then you're about to watch it go down in food form and start shipping KFC and Cinnabon so hard that you'll wonder where your tastebuds end and your alarming amount of emotional investment begins. The two brands just teamed up to create KFC's new Cinnabon Dessert Biscuits, which are basically an explosion of everything good, delicious, and carb-acious in this world.

The limited time menu offering, which hits KFC locations on April 29 and will be available through June 30 while supplies last, is basically a Cinnabon and KFC biscuit hybrid. Per a press release, "KFC’s flaky biscuit topped with Cinnabon’s mouthwatering cinnamon brown sugar glaze and signature cream cheese frosting." That roughly translates to, KFC took a biscuit and went ahead and drenched it in Cinnabon sauce for you, then frosted it to boot.

Bustle had the opportunity to try this new menu offering before it hit KFC locations, and it is every bit as swoon-worthy as it sounds. I may be struck down by the dessert gods for confessing this, but I actually like it a little more than regular Cinnabons — the savoriness of the biscuit balances out the sweetness of the glaze and the frosting in a satisfying way, so it kind of tastes like a thicker, more buttery monkey bread situation. That said, both the KFC-ness of the biscuit and the Cinnabon-ness of the sauces are very distinct, making this a true and equal marriage of iconic fast food offerings.

Another word to the wise: the new biscuits, like most things on this earth, pair very well with fried chicken. And luckily, KFC is launching a deal to help you do just that — you can get four free Cinnabon Dessert Biscuits with the purchase of any 10-piece meal or larger. Separately, the biscuits will retail for $1 each, or $3 for four, which basically means for a mere $3 you can add one of these as a side for all of your meals and have one leftover for dessert. Dreams on dreams, brought to you by KFC.

And speaking of dreams that KFC has brought to life recently, let this post serve as your official reminder another KFC sweet-and-savory combo — the KFC Chicken & Waffles — are about to leave the limited time menu. In fact, they finish their run with KFC on April 29, the very same day that the Cinnabon Dessert Biscuits take the stage. The major takeaway here is that for one day and one day only, you'll be able to feast on both the Chicken & Waffles and the Cinnabon Dessert Biscuits, so go ahead and cancel whatever unrelated plans you have now. This obviously takes precedence. Godspeed, y'all, and good cluck.