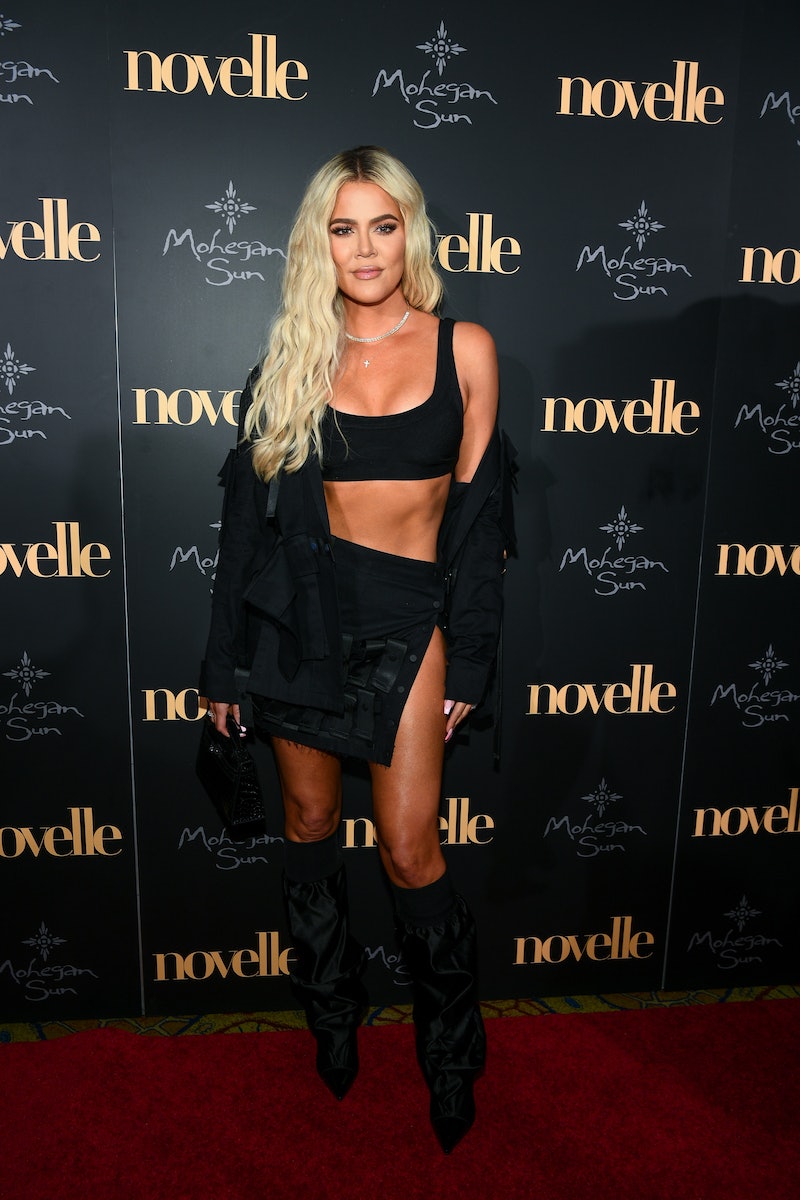 No one would blame Khloé Kardashian if she never talked to Tristan Thompson ever again, especially after all they've been through in the public eye. Nevertheless, she understands that she and Thompson are still parents even if they're not romantically involved. Recently, Kardashian said Thompson can see their daughter, True Thompson, any time he wants. Just because she's done with him as a love interest, that has nothing to do with him being a father to True.

In a new interview with Us Weekly, the Revenge Body host said of their split and co-parenting journey, "It's fresh. I think Tristan and I broke up, like, five months ago, so it’s still sometimes awkward, but I think we’re both doing a really good job." That math is a little confusing, since it's July and the rumors that Thompson cheated with Jordyn Woods circulated in February, but maybe she just got the timeline mixed up.

The reality TV star also shared with Us Weekly, "I mean, whenever he wants to see her, he can." No pettiness here. Kardashian also emphasized, "It’s all about the baby. Once you put your kids as a priority, and they come first, nothing else matters."

Fortunately, Kardashian has had plenty of exposure to co-parenting throughout the years. In a joint interview that Kardashian and Scott Disick recently did for Entertainment Tonight, Disick discussed his co-parenting situation with Kourtney Kardashian and how his girlfriend Sofia Richie factors into the situation.

During that interview, Kardashian told Disick, "It's hard work for all parties — I think for you, Kourtney, Sofia, they're all just really strong." Then she shared, "I'm so proud of them, and I'm so proud of them promoting that and hopefully inspiring other people." She declared, "It's a beautiful thing to get along with each other and for your kids to see that." Absolutely. Hopefully True will get to experience a co-parenting situation that is just as positive as her cousins' current situation.

Kardashian continued saying of Kourtney and Disick, "I think they're doing amazing, and I think everyone has to handle their co-parenting situation in their own style, but my mom and my dad were like that." If anyone understands how True might feel, it's Kardashian — her parents Kris Jenner and Robert Kardashian split when she was a child.

"It took them years, but my dad would come over once a week for family dinners and would play golf with my stepdad, and so we come from [a] family where we believe in that — you share children with people, and that's how it should be, and love is love."

That really is a nice thing. Just imagine Thompson playing golf with Kardashian's next love interest. That sounds like it would be a major plot twist, but at this point, seemingly unexpected relationships are the norm with the Kardashian/Jenner family.

Most people would not be able to co-parent with someone who reportedly cheated during the ninth month of their pregnancy. It would be difficult for anyone to have friendly interactions with a man who supposedly crossed the line with a longtime family friend. But no matter what, Kardashian keeps her daughter at the forefront when it comes to decision-making.

She's been very vocal about making sure that True has a solid relationship with her father, despite the issues that Kardashian has experienced with him. In March, Kardashian denied rumors that Thompson doesn't make time for True. In that same tweet, she promised True will "NEVER be put in the middle of him and I."

Parenting is difficult. Parenting in the spotlight is probably even more difficult. Throw in two cheating scandals and it can become a very complicated situation. But at the end of the day, Kardashian prioritizes her daughter's well-being over anything else and that's what guides her decisions.

More like this
Khloé Kardashian Writes Touching Instagram Tribute To Tristan Thompson’s Mother
By Alyssa Lapid
Rachel Fuda Gave Birth Just Weeks Before 'RHONJ' Season 13
By Brad Witter
Danielle Cabral From 'RHONJ' Is No Stranger To Reality TV
By Brad Witter
Vanderump Rules’ James Kennedy Already Called His Girlfriend Ally “The One”
By Brad Witter
Get Even More From Bustle — Sign Up For The Newsletter
From hair trends to relationship advice, our daily newsletter has everything you need to sound like a person who’s on TikTok, even if you aren’t.