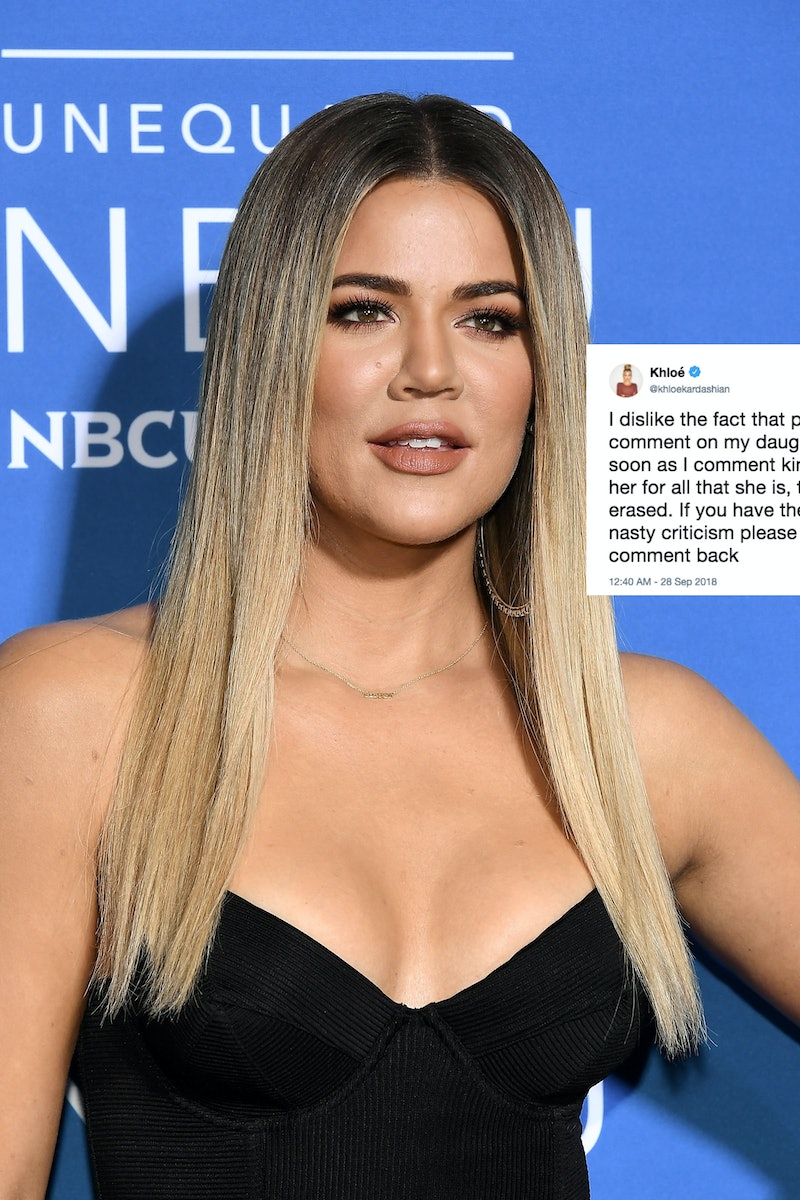 Like any good mom, Khloé Kardashian is not going to stand for any of the ignorance thrown her daughter's way. In a Twitter statement, Khloé Kardashian defended True against racist trolls, who had some disgusting things to say about the little one's skin color. The reality star's passionate defense of her child is sure to tug at your heart strings.

It's unfortunate that baby True, who is just 5 months old, was met with this kind of vitriol in the first place. But Kardashian decided to take the high road in the matter, as she related in her tweets. On Sept. 27, she wrote on the social media site,

"I dislike the fact that people are allowed to comment on my daughters skin color but as soon as I comment kindly back and praise her for all that she is, the comment gets erased. If you have the courage to post your nasty criticism please allow one to defend or comment back."

This wasn't the only comment she made about the situation. She followed up her previous tweet with a reply to a fan, in which she said she's happy to be the one to try to educate other people: "I truly love educating others and hopefully opening up their minds to a beautiful collective world."

Additionally, the Keeping Up With the Kardashians star left her fans with a positive and relatable message, showing that it's way better to lead with love and light. She wrote, "We need to learn to praise all skin tones/ethnicities! Our beauty is in our differences. We can learn so much!" Kardashian then added how wonderful it is to just be confident in yourself, something she admitted to struggling with herself:

"So proud of every human who is confident in who they are. I'm in my 30s I think I'm just finding my confidence. So I am patient with others. But allow me to voice mine."

In the light of such hatred, it's amazing to see Kardashian going a positive route in her defense of baby True. She wasn't the only one to highlight this issue on Twitter either. When Kim Kardashian posted a photo of the three cousins — True, Stormi Webster, and Chicago West — the pic was met with a disgusting amount of hate, and, particularly, hate geared toward True, according to the Independent.

As the publication went on to note, fans struck back at the racist trolling, with one user highlighting the particularly nasty comments and lamenting how sad it was that True was dealing with colorism at such a young age.

Unfortunately, this isn't the only time that Kardashian, and fans, have had to jump to baby True's defense on social media. In July, one user posted, in a since-deleted tweet, that Kardashian's baby was "not cute at all," per Cosmopolitan. Once again, the reality star didn't let that kind of negativity go untouched. Instead, she responded to them and questioned why they would pull that move in the first place, particularly as it was in regard to a child.

It really is unfortunate that the mother-daughter duo have had to deal with such disgusting behavior on more than one occasion. But no matter what, you can always count on Kardashian to stand firm against the trolls and defend her adorable daughter, True.