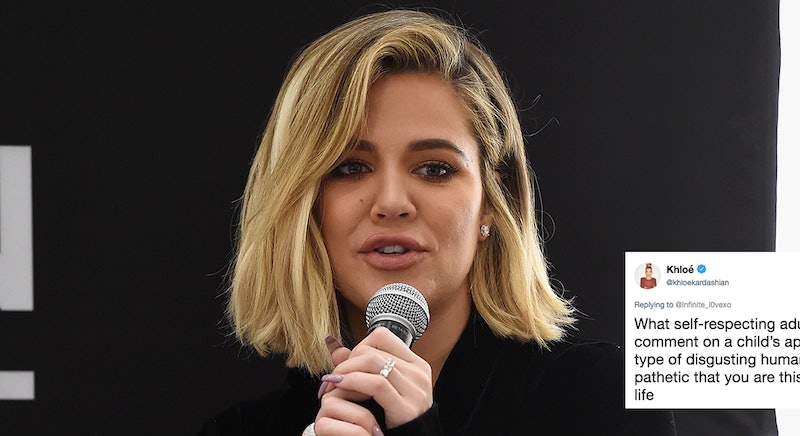 Keeping Up With The Kardashians premiered on E! more than a decade ago, and somehow, people still haven't learned not to mess with one Khloé Kardashian — or the people she loves. Early on July 7, Khloé Kardashian responded to an insult directed at Baby True on Twitter in the most perfect way. A fan had tweeted that they didn't think Khloé's daughter True Thompson was cute. After Twitter user @Infinite_l0vexo posted a now-deleted tweet in which they passed judgment on the three-month-old's appearance, Khloé posted a series of tweets in response that did not hold back.

"What self-respecting adult would even comment on a child’s appearance?" she asked, "What type of disgusting human being are you? It’s pathetic that you are this miserable in your life." When Twitter user @DashDolls831 agreed that "It's disgusting that people could be so vile, seriously," the clothing designer responded:

She’s a loser for that. No respect for people like that. People are entitled to their own opinions and feelings but why on earth would you tweet that and if you must why would you tag me?

Fortunately, more people were team KoKo than not. @EHeirsch wrote, "Why are people such haters @khloekardashian!!? You are doing great momma. Keep doing your thing," but Khloé still wasn't done. "I just don’t get why people have that much energy to actually project all of this negativity," she wondered, "That takes a lot more energy than just being kind."

It doesn't look like Khloé allowed the negativity to keep her down for too long. In fact, it more or less rolled off her back. The majority of her tweets from the same time period are positive and genuine, with the new mom thanking fans for kind words and their well wishes. She's always been a proud and defensive person. Still, to scroll through Khloé's feed is to generally be met with gratitude and effusive praise for her fans. You might even pick up the occasional nugget of information about Khloé's personal life, like how her body didn't react well to breastfeeding daughter True, how she's envious of how naturally breastfeeding came to older sister Kourtney Kardashian, or that she thinks boyfriend Tristan Thompson's genes are "strong" in both of his children. (Thompson also has an 18-month-old son, Prince, with ex-girlfriend Jordan Craig.)

She hasn't revealed whether she's planning to expand her family just yet, but it's obvious that the thought has crossed her mind. Per Entertainment Tonight, Khloé's Instagram comments say it all. Just consider this one she recently left on a photo of big sister Kim Kardashian:

So I don't get what's happening here. After three kids is there a secret rule that moms get hotter? You and Kourt are really making me think about the three kid rule.

Can you imagine three tiny True Thompsons? (Or would it be Trues Thompson?) Either way, the concept is too precious to handle. Like, take your time, be healthy, and do what feels right for you, Khloé — but if you wanted to have at least two more adorable babies, fans will not try to stop you.

Recently, Khloé expressed her anxiety over returning to work. On July 6, Khloé went back to work with her inclusive clothing line Good American, and professed her own (understandable) anxiety at being away from her daughter. Per Khloé herself, it was the longest period of time she'd spent apart from True since giving birth in April 2018, so while she knew True was in good hands, it was still an adjustment for Khloé.

Whether she is at work, at home, or on Twitter, it's clear that Khloé is fiercely protective of her family — and she has about a million or so followers to back her up. And a really, really cute baby, too.