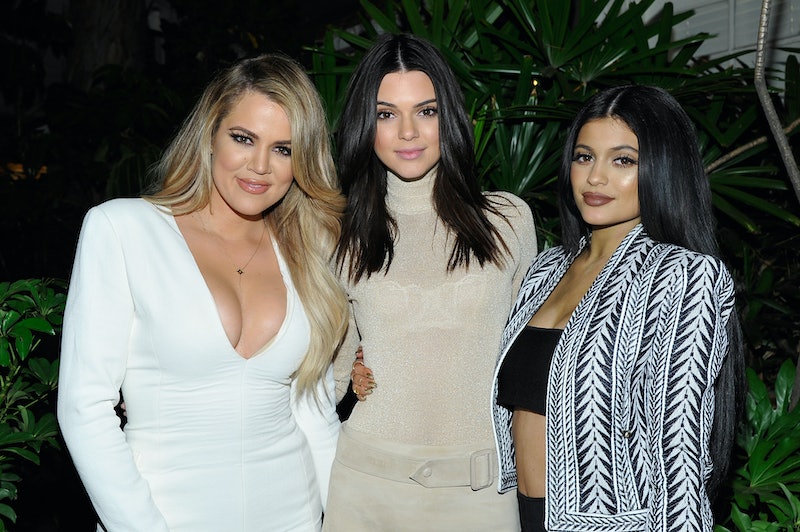 Now there is a whole new generation of Kardashian/Jenner family members to "keep up with" since most of them are parents now. Not only that, but they're keeping up with each other. In a recent Instagram post, Khloé Kardashian joked that True is a model just like Aunt Kendall. This could really mean a multitude of things. First off, True has four aunts and each of them has about a million jobs that they are very good at.

Thankfully, Khloé got very specific in her caption when she posted a portrait of her daughter True sitting on a white bench. The Keeping Up With the Kardashians star began, "You guys. I cant handle this! I’m so annoying I know but I’m obsessed." And then, she joked, "She has the smile down!! Auntie Kenny.... baby True is coming for you!" For anyone who doesn't get Khloé's joke, she's referring to Kendall Jenner's career as a successful supermodel.

Aunt Kendall liked the Instagram post, but she did not comment, perhaps because she's fully aware of the young model on the rise. No one can model on a bench as cutely as True can. Watch out, Kendall. The next thing she knows, True will be snapped in paparazzi photos with the Hadid sisters and Kendall's other supermodel friends.

True is only one year old, but she has already taken some inspiration from some of Kendall's Instagram photos, with her own adorable spin, of course.

Sitting On A White Couch

Kendall hasn't posted one working it on a bench, but she did post one from a white couch, which True has done as well. Well, Khloé posted it, but True did all the posing.

Kendall strutted her stuff in a bright, pink tutu. True had her own take on the look, but in mint with some touches of pink.

Both True and Aunt Kendall took photos in pink, sparkling cars. Of course, True's is a toy car, but they were definitely channeling similar vibes.

True can't take her own selfies yet, but she did rock a head wrap and big sunglasses just like Kendall did. However, True went all out with three different poses in one Instagram post.

Laying On A Beach Towel

Both the aunt and niece looked straight on at the camera when they lounged on beach towels with their blue bathing suits on.

Lounging In The Pool

Kendall held a wine glass in the pool while True was held by her mom Khloé, who was helping her swim.

Kendall went for the toothless smile when she wore a bathing suit, but her niece had the biggest smile in the world when she modeled her swimwear.

Sitting In The Grass On A Blanket

Both Kendall and True posed for artsy photos sitting in the grass on a blanket. Kendall went solo, but True had a sweet mother/daughter moment outdoors.

When is Kendall going to post a photo of herself leaning on a white bench? It would be great to get a side by side comparison of her and True, who was just too cute in the photo Khloé shared. It's tough to "keep up with" that!