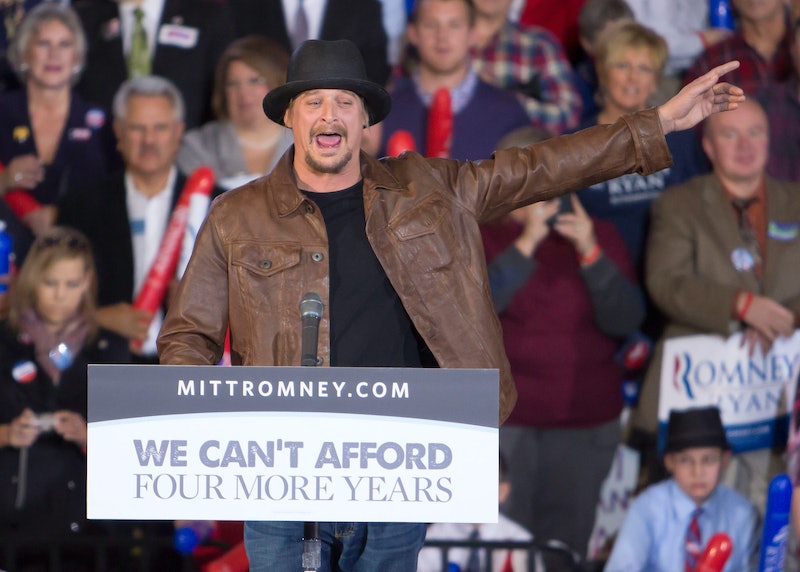 If you think you've seen all that the Republican Party has to offer in the post-Obama era, you're wrong. Longtime Democratic Sen. Debbie Stabenow may face some unexpected competition when she runs for re-election in Michigan next year, as rumors swirl that musician Kid Rock might run for the Senate in 2018. It's not official yet, but honestly, would it even surprise you at this point?

According to a report from the Detroit Free Press, Kid Rock's name was tossed around as a potential candidate at a Michigan Republican Party convention last weekend. The "All Summer Long" singer would run against Stabenow, who first won election to the U.S. Senate in 2000. Stabenow has risen through the ranks of Senate Democrats ever since. She's currently chair of the Senate Democratic Policy Committee.

Republicans may think they have a chance in 2018 because of the momentum created by President Trump. In 2016, Michigan went red, as Trump became the first Republican presidential candidate to win there in nearly 30 years. Surely, there's still plenty of time for Michigan voters to change their minds before next year, but Kid Rock's candidacy wouldn't be totally unexpected.

Kid Rock literally played the soundtrack to Mitt Romney's 2012 presidential campaign. He even joined Romney at a campaign rally in the musician's home state of Michigan. More recently, he spoke to Dan Rather for an interview that aired on Tuesday, where he reportedly called himself a person who "stands up for what he believes in at all costs."

Not to mention, Kid Rock has also boldly shown his support for the new president. He endorsed presidential candidate Trump, and he later began selling pro-Trump T-shirts with such phrases as "God, Guns & Trump." (Trust me, you don't want to see the other phrases.)

As offensive as it may be on T-shirts, Kid Rock's voice wouldn't necessarily be a surprising addition to the current GOP lineup. With the election of Trump, American voters clearly sent a message to the Republican Party that they can handle the outrageous rhetoric. How else could a candidate who once bragged about grabbing women by their genitals become president? (Trump later dismissed the language as "locker room talk.")

Clearly, America should have seen Kid Rock's still-hypothetical senatorial campaign coming. He's a conservative-leaning, pro-Trump celebrity who is not afraid to use his voice. While the spirit of activism can be appreciated, I hope he leaves the rhetoric from his pro-Trump T-shirts firmly in the past.