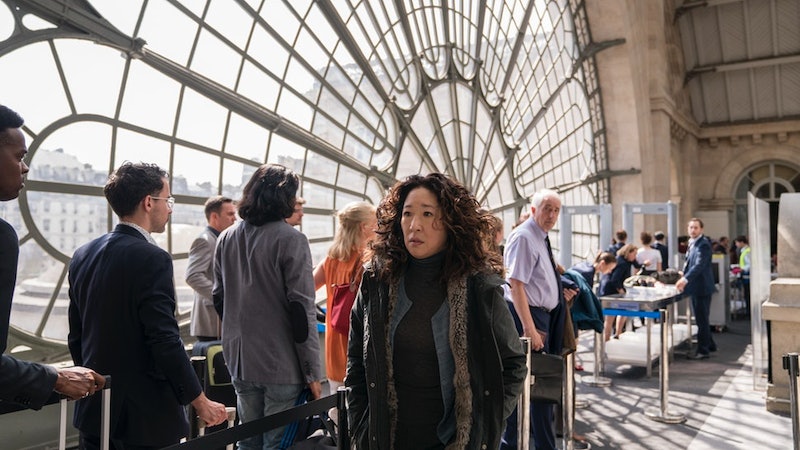 Earlier this week (on Valentine's Day, no less), a teaser trailer for Killing Eve season two was released, stoking the fervent anticipation of the BBC thriller's millions of fans. Without giving away too many spoilers for those yet to watch (where have you been?), the first season wasn't exactly a walk in the park for title character Eve Polastri, played by Sandra Oh — but according to the Golden Globe winning actor, things are about to get "so much darker" for the MI5 agent. Eve! You've already been through so much!

Speaking to Uproxx, Oh teased, "You know, I’d say definitely for Eve’s character — her journey — it gets super dark. I feel like she is pushed to the limit in her, not so much pursuit of Villanelle at this point, but her dynamic with Villanelle and her pursuit of her job. And she’s pushed to the limit, and then she goes over. She fell over. Yeah." (Oh also revealed her ideal burger specifications, should you ever be so lucky as to share dinner with her: "No cheese. A lot of mayo. A lot of pickles.")

The Grey's Anatomy alum offered a similar glimpse into season two while speaking on U.S. TV show Extra. "It’s so much darker for Eve’s character," Oh said, as Digital Spy reports. "It just goes really, really dark, and the pressure is intense. The line just keeps on moving, and Eve just steps over that line." Anyone else feel a little queasy with excitement?

The second series of Killing Eve will differ in one major way from the first: Emerald Fennell serves as lead writer, taking over from Fleabag creator Phoebe Waller-Bridge (though the latter is still an executive producer on the show, as Variety reports.) No need to panic, however: Oh told Uproxx that Fennell captured the show's trademark tone. "Emerald [Fennell] and Phoebe [Waller-Bridge] are very good friends, and they really come from the same kind of mindset," she said, adding, "But of course Emerald has her own take on things and her own ways."

Jodie Comer, the actor behind Villanelle, also appeared on Extra alongside Oh, and stressed that fans won't be disappointed by series two. "I think as well it's just so much more of what people loved about the first series. We are still going on a journey with these characters," she said. "But they're all in different places and the relationships between them have changed with the events of series one, so we're all having to move in a new direction, which is exciting."

Now that you're positively giddy about a second serving of Killing Eve, when can viewers expect to see season two? As the Radio Times notes, a U.S. airdate has been released: April 7, 2019. Though there was a six-month wait between the first series' debut on BBC America and its arrival on BBC Three in the UK, there shouldn't be quite so significant a delay this time around. Charlotte Moore, the BBC's director of content, said at the 2018 Hewlett Memorial Lecture that fans would "not have to wait so long next time," according to the Radio Times. Let's hope it's a matter of days at most.