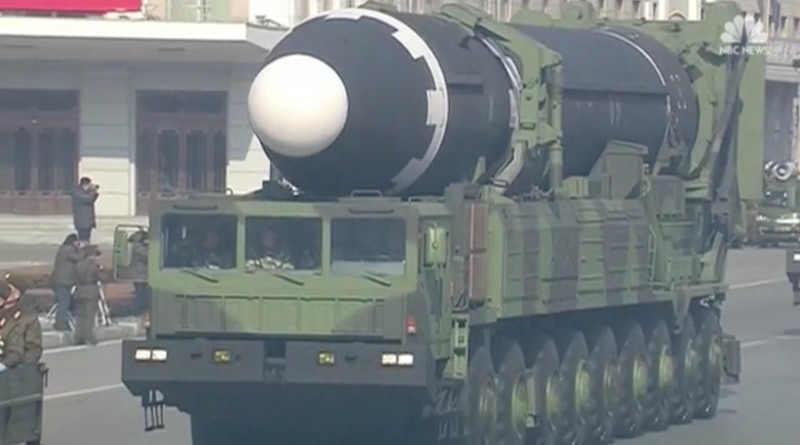 North Korea is known for staging formidable military demonstrations. So when President Trump raised the idea of hosting an enormous military parade in the United States, critics condemned the plan as being reminiscent of something that Kim Jong Un would do. Sure enough, Kim Jong Un held a military parade in Pyongyang, North Korea's capital, and showed the world just the sort of power spectacle he likes.

The parade comes the day before the opening ceremony of the 2018 Winter Olympics in PyeongChang, South Korea, to which North Korea is sending a delegation. Many have speculated that the delegation could signal a warming of relations between the two Koreas. But even if those hopes prove correct, this parade is another reminder that the Democratic People's Republic of Korea (DPRK) isn't planning a complete reversal toward diplomatic tactics and still intends to use shows of force to pursue its goals.

The parade is held annually to commemorate the founding of the Korean People's Army, though it usually happens in April. In fact, the ceremony has not taken place in February for 40 years. Kim's decision to move up the date has reportedly slightly cooled some people's optimism about recent developments in the relationship between North and South Korea.

Still, the plans for the Olympics seem ready to go on as scheduled. South Korean President Moon Jae-in will dine with the North Korean delegation on Saturday, the day after the games' opening ceremony. Kim Jong Un's young and powerful sister, Kim Yo Jong — who was at the parade — will also attend the lunch.

The parade was smaller that it has often been in the past and was not shown live on North Korean state television as usual (instead, footage was sent out for a later broadcast). International journalists were not invited, but Kim still addressed the United States in a speech. He said that his military is prepared for a confrontation if the DPRK's sovereignty is threatened. He called his forces a "world-class military power."

The parade featured lines of men with muskets, lines of women dancing with muskets, and plenty of horn fanfare. Kim presided over the event and saluted in an all-black uniform and fedora.

Earlier this week, news broke that Trump had asked the Pentagon to stage its own military parade, wanting it to march down Pennsylvania Avenue in Washington, D.C. Press Secretary Sarah Huckabee Sanders confirmed the story, saying, "President Trump is incredibly supportive of America's great service members who risk their lives every day to keep our country safe. He has asked the Department of Defense to explore a celebration at which all Americans can show their appreciation."

Trump's idea reportedly came from a Bastille Day parade he'd seen in Paris when he visited last summer (which he wanted "to top"). Still, many commentators' minds immediately went not to Paris, but to North Korea.

"When you think of tanks and/or missiles rolling through the streets, it's North Korea or Russia that you think of, not the United States or France," said CNN's Chris Cillizza.

"Parades like this remind me of that old Texas saying about a braggart, saying he was 'all hat and no cattle,'" James Stavridis, a retired admiral and former NATO leader, said to CNN. "We are the best military in the world and don’t need a North Korea-style parade to prove it."

North Korea had planned its parade before Trump spoke out about his own parade dreams. But the uproar over Trump's scheme continues, and the event still must be analyzed within the context of the ever-escalating tension between the DPRK and the United States.

The parade ended with four Hwasong-15 ballistic missiles, the same projectile that North Korea launched last November and is believed to be able to reach the U.S. capital.