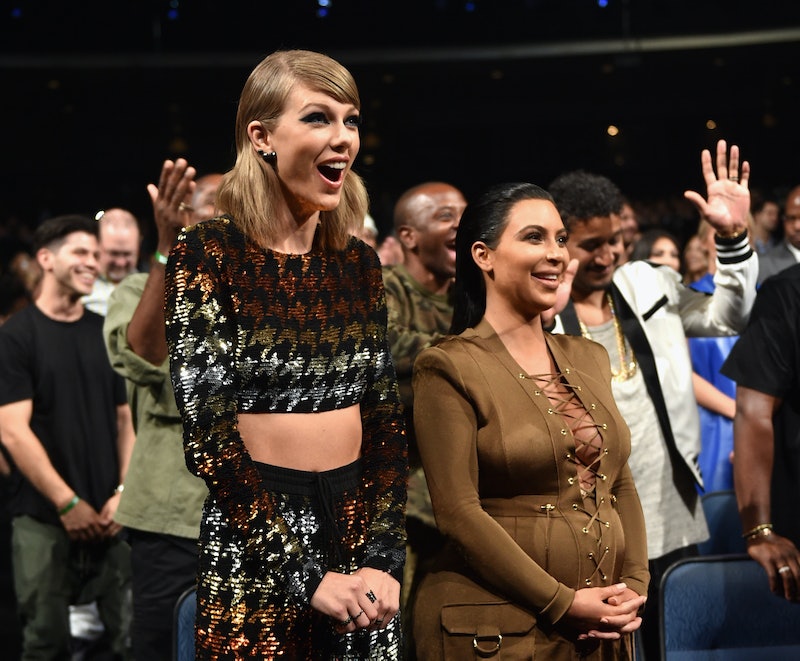 2020 is cursed. Not only is the world in the midst of a global health pandemic, but one of the most exhausting celebrity feuds of all time is resurfacing, four years after the initial spat. Taylor Swift and Kim Kardashian broke their silence on the newly leaked video of that infamous phone call between the singer and Kardashian's husband Kanye West about his controversial song "Famous." They're still going back and forth on what really happened on that call, and it feels like we're in 2016 all over again.

On Monday, Mar. 23, Swift responded to the video, which made headlines over the weekend, on her Instagram stories, asking followers to "swipe up to see what really matters." She led fans to sites where they can donate to Feeding America and the COVID-19 Response Fund — but she still got in a jab at Kardashian and West along the way.

"Instead of answering those who are asking how I feel about the video footage that was leaked, proving that I was telling the truth the whole time about *that call*," she said, adding in parentheses, "you know, the one that was illegally recorded, that somebody edited and manipulated in order to frame me and put me, my family, and fans through hell for four years..."

Apparently, that one sentence was enough to ignite Kardashian. In response to Swift, she took to Twitter, where she called Swift addressing the video "self-serving." "@taylorswift13 has chosen to reignite an old exchange - that at this point in time feels very self-serving given the suffering millions of real victims are facing right now," she began, ignoring that Swift encouraged followers to donate to COVID-19 victims.

Kardashian proceeded to accuse Swift of lying about the call in 2016. "The only issue I ever had around the situation was that Taylor lied through her publicist who stated that 'Kanye never called to ask for permission...' They clearly spoke so I let you all see that," she wrote. "Nobody ever denied the word 'bitch' was used without her permission." She also denied editing the footage of the Kanye West call that she posted in 2016, as Swift accused, and concluded by promising to never talk about the Swift-West call again. "This will be the last time I speak on this because honestly, nobody cares," she wrote.

Hilariously, it was neither Kardashian nor Swift who had the true last word on this debacle (so far, at least). Swift's publicist Tree Paine tweeted her original statement from 2016 in response to Kardashian's accusation that Swift lied through her publicist, which proves that neither Swift nor Paine denied that the call had happened. "P.S. who did you guys piss off to leak that video?," she added. An interesting question indeed, as the source of the new video remains unknown.

Let's hope Kardashian keeps her promise to never speak about it again, and that Swift joins her. As the great Kourtney Kardashian once said, "Kim, there's people that are dying." And do we really need to be rehashing this 2016 feud right now?