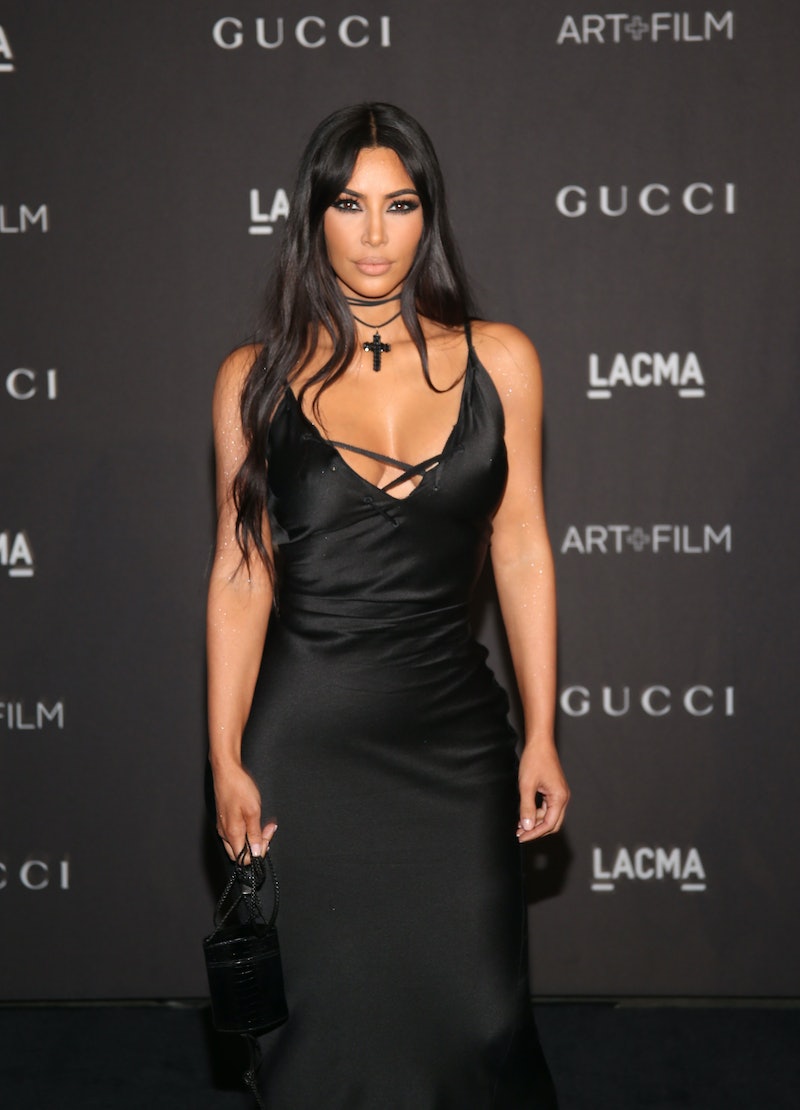 Kim Kardashian West has been rocking a long bob for a while now. Her cool brunette highlights and the curled up flip of the hair gave her that perfect '90s supermodel look. Now, though, Kim Kardashian cut her hair twice in one day, and that long bob has been replaced with the shortest hair she's ever had.

According to Allure, Kardashian made an appearance on NBC's Today Show in talk about the launch of her new line of shapewear, Skims. While there, host Hoda Kotb complimented her new sleek bob, and Kardashian West revealed that she'd just cut her hair two inches that morning.

The first bob, which fans saw on the show, fell roughly an inch below her chin and rose to a few inches above her shoulder. The new 'do was ultra-sleek and straight (a look Kardashian often does when her hair is long), but according to the Skims owner, it wasn't short enough for her hairstylist, Chris Appleton.

In a Twitter post after her appearance on Today, Kardashian revealed that Appleton wanted to cut her hair even shorter than it was that morning and asked her fans if she should. Only a few hours later at the S by Serena fashion show, Kardashian's bob had been shorn again.

When Kardashian West appeared at the fashion show, her bob was markedly shorter than it had been that morning. Now, it clocked in at chin length and was multiple inches above her shoulders. Turns out, it's the shortest cut that Kardashian has had (and it looked amazing). On his Instagram account, Appleton discussed the chop and revealed to fans that the look is the shortest he has ever gone on the KKW Beauty owner.

In the same Instagram post, Appleton asked fans the same question Kardashian had posted earlier: if she should go shorter and keep the look. The answers were mixed on both Appleton's and Kardashian's social media posts, but despite cutting her hair twice it one day, it seems that Kardashian West was missing her long locks.

On Sept. 12, Kardashian was out and about in New York, and the sleek and chic bob she had? Well, it was already gone.

The Skims owner has officially returned to her naturally dark roots and extra long look. That '90s era cool brunette she had been rocking is just as gone as her chin-grazing long bob.

As for Appleton, he took to Instagram to joke about the quickly disappearing style he'd just giving Kardashian West. He posted a photo of the star with her new extensions writing, "Back long by popular demand mainly from Kim lol," with the hashtag #ripbob.

Of course, this isn't the first time that Kardashian West has rocked a bob, and it likely won't be the last. She wore one back in June when she visited the White House to discuss criminal justice reform, and she wore a similar, but slight asymmetrical style back in 2018. While the bob may be gone for now, don't be too surprised if it reappears.