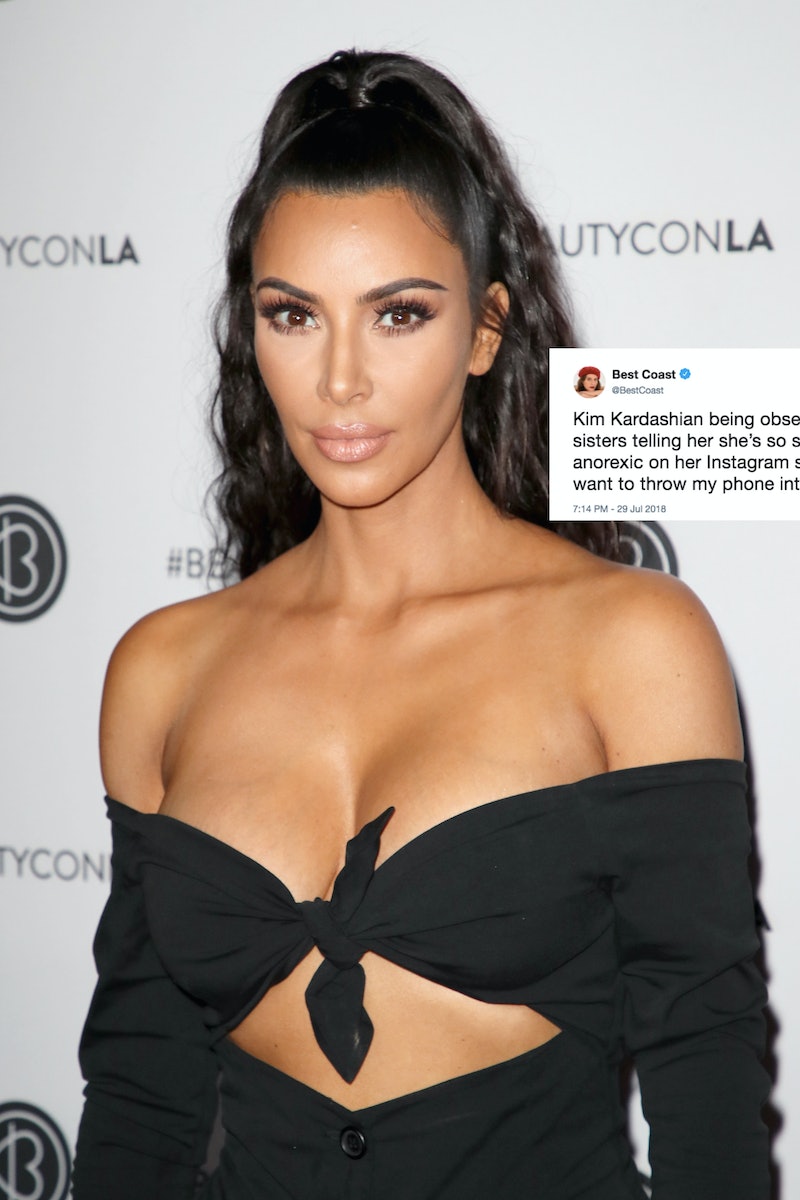 During the City of Hope charity poker event on Sunday night, Kim Kardashian's weight and how "skinny" she is became a topic of discussion on the reality star's Instagram Story. Kim, Khloé Kardashian, Kendall Jenner, and Malika Haqq discussed her weight loss, which the KKW Beauty founder welcomed with open arms. Fans are extremely upset with Kim's weight comments, because they feel she, along with her sisters, made it seem like looking "anorexic" or "skinny" is something to strive for. (Bustle reached out to Kim's rep for comment on the backlash, but did not receive an immediate response.)

On Kim's Instagram Story (you can watch the videos here), Kendall told her older sister, "No, like I'm really concerned. I don't think you're eating. You look so skinny." Kim responded, "What? Oh my god, thank you!" In a later video, Kendall said to her older sister, "My purse is as tiny as you." Kim happily declared, "Oh my god, the compliments!"

She also posted videos of Khloé. In one, the Revenge Body host said, "I’ve never seen a human being look as good. You are a walking Facetune doll." At one point, Haqq even joked that Kim is consuming "different flavors of oxygen" as part of her diet. "OK, tell me more, guys," Kim said overjoyed. Right after that, she exclaimed, "You guys, I'm not that skinny!" Khloé responded, "Kimberly I can literally see through you!"

To that, Kim said, "I’m down to 119 pounds. I will say when I take out my hair extensions I am less." Khloé then seemingly analyzed the Keeping Up With the Kardashians star's body. "Your hair extensions, your ass, your tits, everything, they’re heavy, 'cause she’s f*cking voluptuous," Khloé said. "But she’s anorexic here [makes a gesture suggesting Kim's waist], her arms are like pin-thin, they’re like my pinky."

To be clear, the problem isn't with how Kim looks. It's her body, and if she feels good, is healthy, and loves her appearance, then great. That's how it should be. The actual issue is with what was said and Kim welcoming "anorexic" as a compliment.

Fans on Twitter highlighted why exactly these remarks are problematic. Below are some of the many examples on social media, pointing out that with Kim's major fan following, these types of comments can send a harmful message.

This isn't the first time Kim has faced this kind of backlash. In May, Kim posted an appetite suppressant lollipop ad, which extremely angered fans. She wrote on Instagram, "#ad You guys... @flattummyco just dropped a new product. They're Appetite Suppressant Lollipops and they're literally unreal. They're giving the first 500 people on their website 15% OFF so if you want to get your hands on some... you need to do it quick! #suckit." (At the time, Bustle reached out to Kardashian's rep for comment on the post's backlash, but did not hear back.)

People were really upset about the ad, including The Good Place's Jameela Jamil. "No. F*ck off. No," Jamil tweeted. "You terrible and toxic influence on young girls. I admire their mother’s branding capabilities, she is an exploitative but innovative genius, however this family makes me feel actual despair over what women are reduced to." Jamil's tweets continued, "MAYBE don’t take appetite suppressors and eat enough to fuel your BRAIN and work hard and be successful. And to play with your kids. And to have fun with your friends. And to have something to say about your life at the end, other than 'I had a flat stomach.'"

On Monday, Claire Mysko, CEO of the National Eating Disorders Association, told Women's Health, "Compliments on weight loss can be and are often problematic. We hear from many people — in fact most people who have struggled with eating disorders — have cited experiences where they have lost weight and been complimented, and this serves as fuel for their eating disorder."

Mysko also reflected on the way the sisters used the term "anorexic" and how problematic their usage really is. She explained, "It’s a serious, life-threatening illness. It has the highest mortality rate of any psychiatric diagnosis, so to frame it in the context of a compliment is really quite concerning."

Overall, fans are just plain unhappy with how Kim and her sisters praised the reality star's body. It's absolutely fine to uplift others by celebrating their appearance. There's also nothing wrong with loving your body at "119 pounds," but to use words like "anorexic" as a compliment — and to accept it as one — sends the wrong message to anyone of any age about what anorexia really is and what a healthy body looks like.

If you or someone you know is struggling with an eating disorder, you can call the National Eating Disorder Association hotline at 1-800-931-2237. For a crisis situation, you can text "NEDA" to 741741. There is also an online Helpline.