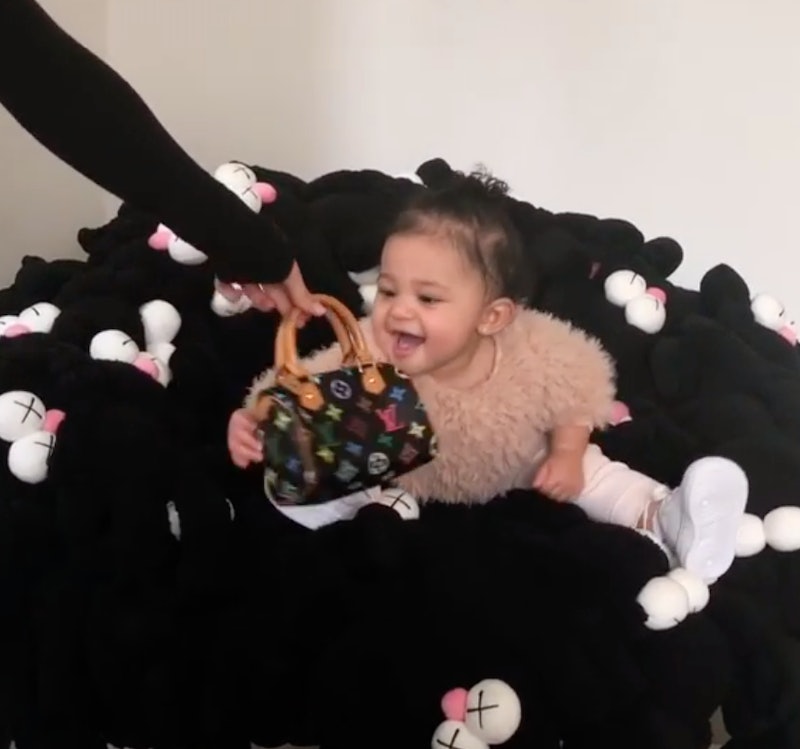 She turns one next month but she's already a fashion icon. That's not simply because her mother dresses her in leather leggings and Burberry jackets, either. Kim Kardashian bought Stormi Webster a Louis Vuitton handbag for Christmas and her social media reaction to the over $1,000 present was absolutely priceless. Seriously.

Kardashian also posted a shot of the bags in her Instagram story, noting that she bought the mini purses from Japan as Christmas presents for all of the baby girls in the family — some of which are under the age of 1. So Stormi wasn't the sole recipient of a high-end bag that most people save months for. Khloe's daughter True, Kourtney's daughter Penelope, Rob's daughter Dream, and Kim's own daughters North and Chicago were all gifted with the pricy accessory.

Stormi's mother Kylie Jenner posted a video while handing the tiny, top-handle black bag off to her daughter. The adorbs clip wins the Internet for the day.

The 11-month-old flashed an ear-to-ear grin, joyously reached for the designer bag, and then flung it over her shoulder like any seasoned influencer or front row fashionista.

PEOPLE points out the bag is from the 2003-launched Takashi Murakami Collection? E! reports that the mini HL Speedy bag retails for approximately $620 while a similar bag of a different color costs over $1000 on the brand's site.

Stormi, rocking a millennial pink, ostrich fur-like top with white pants and sneakers, legit lights up when she gets ahold of the bag. At first, you might be thinking, "OK, she is reacting like any child would when being given something to play with." It doesn't matter if it's a second-hand plush toy or an expensive bag — she'd have the same reaction, right? Wrong. Just watch how she slings that bag behind her back effortlessly and oh-so-chic-ly.

Stormi is totally upping her fashion game with every outfit her mother chooses for her. That said, she already has an eye for accessories based on her bag reaction.

Aunt Kim is certainly the Kardashian family fashion fairy godmother when giving gifts such as this. Being KKW's niece certainly has its privileges. Kardashian shared an image of eight bags. Our math accounts for six baby girls in the family ATM — North, Penelope, Chicago, Dream, Stormi, and True.

A follower inquired about the lucky recipients of the additional bags and the reality star and makeup mogul responded that she was keeping one for herself and another for the future. She and hubby Kanye West are expecting their fourth child via surrogate and reports have suggested Baby No. 4 is a boy. But one cannot help but wonder if Kim is saving a Vuitton bag for another daughter — sooner or later.

Some sectors of the internet might question the idea of young children being gifted with such expensive items that they can't truly appreciate. Others are chalking it up to "rich people problems." But at the end of the day, Kardashian can gift her nieces in any way she pleases.

Stay tuned to Kylie's Insta for how she styles Stormi's statement bag with her OOTDs.