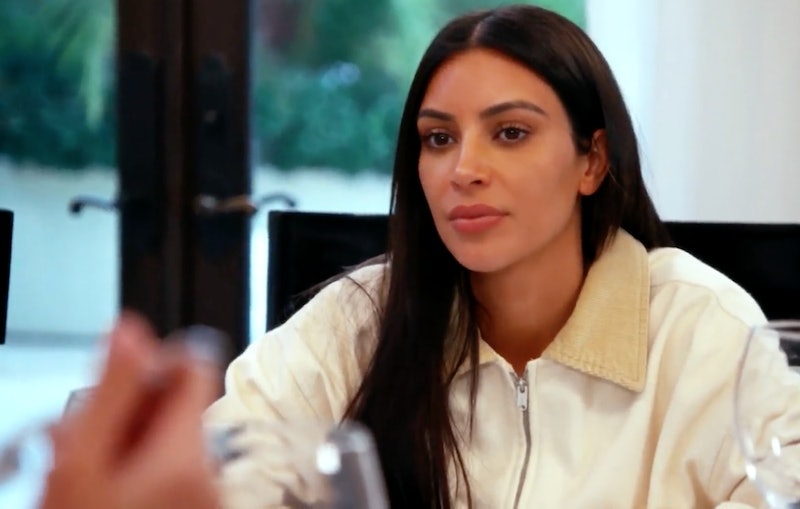 There is a brand new clip from Sunday's Keeping Up With the Kardashians that shows Kim Kardashian will try everything to have another baby. While eating with her family, Kardashian announces that she is undergoing surgery on her uterus, which she hopes will allow her to carry at least one more child. "I have to go in and repair my uterus because I decided I'm going to try to have one more baby," she declares. "Isn't that exciting?"

As you can imagine, her family is beyond concerned about the surgery and the thought of Kardashian having another baby, since it would most likely be high-risk, like when she was pregnant with both North and Saint West.

"Oh my God, I thought you were for sure done," Kendall Jenner is heard saying in the teaser. Corey Gamble also expresses concern and says, "I don't want you to, like, do anything risky." Khloé Kardashian also looks confused as to why her sister is even thinking about this.

Though, that doesn't seem to dissuade Kardashian, who goes onto explain her surgery and admits that it wouldn't make a third pregnancy any less high-risk. She just really wants to have another child and also wants to give North and Saint another sibling. "This surgery is really the one last thing I can try," she says during her confessional in the clip.

Some may not understand Kardashian's hope of another child, especially if it puts her health at risk. However, that's not for anyone to judge. This is her choice, and I'm sure she's given it a lot of thought. She seems to be covering all of her bases before officially making such a major decision. Plus, I highly doubt she would do anything harmful that would affect not only herself, but also Kanye West, their kids, and her family in the long run.

It's not like this is something completely out of blue either. For awhile now, the 36-year-old has been seeking advice from doctors on getting pregnant again. She also looked into surrogacy. Who knows what the endgame is here. It's also currently unknown how her surgery goes, if Kardashian changes her mind about a third baby, or if she decides to have another child, but via a different route.

You'll have to wait until the episode airs to find out. Keeping Up With the Kardashians airs Sundays at 9 p.m. EST on E!