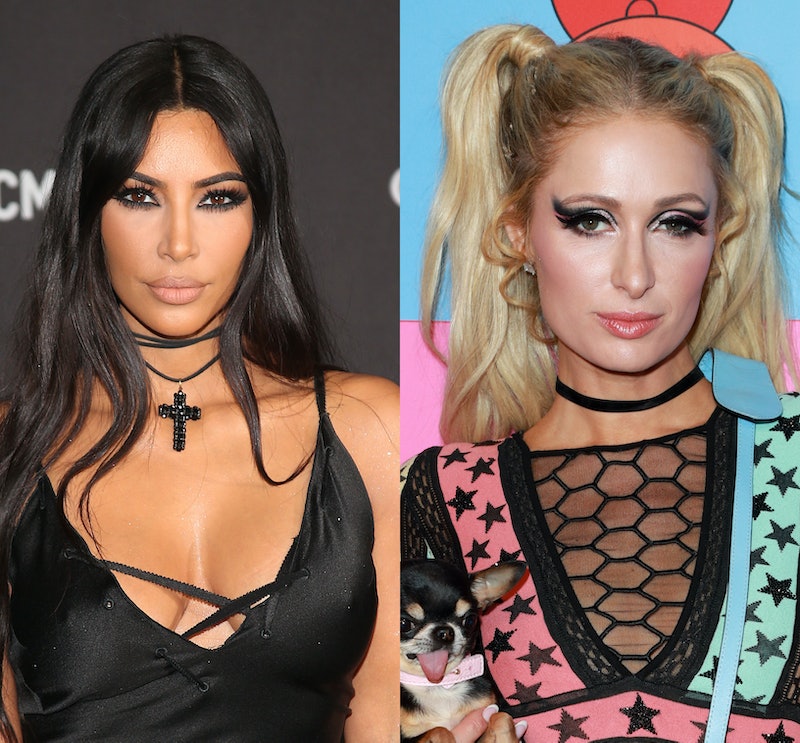 After three decades of friendship, these reality-television royals still know how to have a party. On Saturday, Kim Kardashian reunited with Paris Hilton at her birthday party, and the whole evening looked so glamorous. Hilton hosted a belated birthday bash, as she turned 38 back in February, according to E! News. The event was attended by both Kim and Kourtney Kardashian, who documented the evening on Instagram. The Keeping Up With the Kardashian stars both shared their party looks on their Instagram stories, posing in the car on the way to the event.

Kim also shared a shot of Hilton's fashion choices, showing the star posing in a glittery silver jumpsuit. "Paris party," she can be heard saying in the background while music plays. It seems the two stars hung out throughout the evening, and Kim also posted a video with Hilton on her story using a green heart filter. "Happy St. Patrick's Day!" the reality stars both said in the short clip.

Additionally, Hilton posted a video with Kim, captioning it, "Love you @KimKardashian. So much fun celebrating my birthday with you at #ClubParis." In the video, Kim shares a special birthday message for the socialite and heiress. "Happy Birthday Paris, even though your birthday was a month ago, this is how she celebrates, with lots of friends." Kim K said. "But she deserves it."

The Kardashian and Hilton families have known each other for decades, which means Hilton and Kim have been pals since they were kids, as per E! News. The two reportedly had a falling out in 2011, but have since made peace. In 2014, Kim shared a throwback photo with Hilton on Instagram, revealing that the two had reunited. She captioned the photo, "Reminiscing about the 1st time we went to Ibiza in 2006! @ParisHilton was so good to see you & catch up!! Loves it lol."

In 2015, Hilton also confirmed she was on good terms with Kim during an interview with Style Session. The heiress noted that they've always been close, and that she was proud of Kim's success. "We've known each other since we were little girls. We've always been friends," she said. "It's nice to inspire people. I'm really proud of her and what she's done."

Hilton's birthday festivities were not the only recent time these two stars have partied together. In December, Hilton attended the annual Kardashian-Jenner holiday party, according to Bravo. Kanye West tweeted a video of Kim and Hilton sledding, captioning it "Bff." Hilton even posed with Kris Jenner for an Instagram photo. The Kardashian-Jenner matriarch shared a special message for the heiress, captioning the picture, "Christmas Eve with this gorgeous girl who taught me when she was just a little girl, that blondes really do know how to have a LOT of fun!!! Love you Paris @ParisHilton #family #christmaseve #tradition."

Kim and Hilton have known each other for many years, and it seems their friendship is going strong. There may have been some bumps over the years, but it's clear that these two have worked through those blips and still love to spend time together. If this birthday celebration is any indication, fans can look forward to these two appearing at more glam events together in the future.