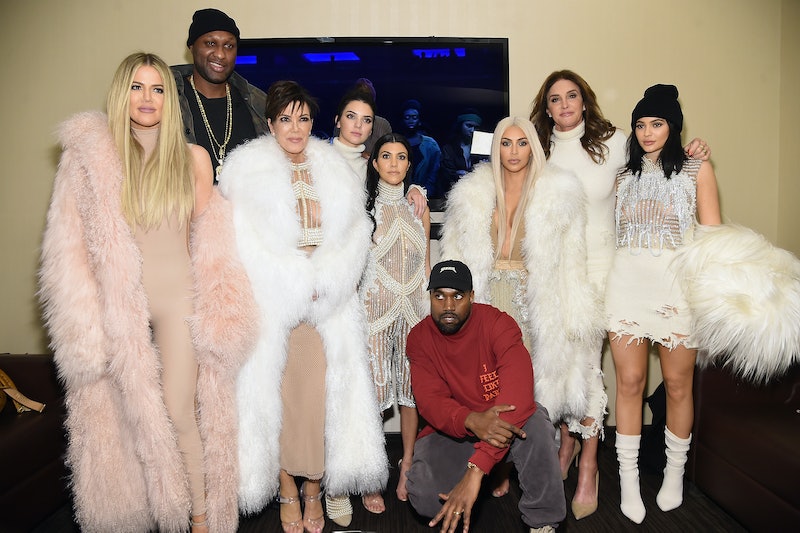 Kim Kardashian has an extensive designer collection, and a portion of her closet is filled with her furs. But in a recent Instagram post, Kim Kardashian revealed some of her furs were remade to faux-fur versions. On June 11, Kardashian posted a photo of her oldest daughter, North West, playing dress up with one of her big white fur coats. West was wearing a baseball cap and grinning as she bundled inside the massive white fur. In the caption, Kardashian broke the surprising fashion news. The reality TV star wrote, "Remember when I wore this! She picked out the same look lol but fun fact — I took all of my fave furs and remade them in faux fur."

The white coat that West was shown wearing appears to be the same coat that the star first wore to Kanye West's Yeezy season 3 fashion show in 2016. At the time, Kardashian stepped out with platinum blonde hair and an all-white look. In fact, the entire Kardashian-Jenner family dressed in coordinating white and glittering ensembles, attending the show in support of the new collection.

It was later revealed at the show by West that he collaborated with Balmain creative director Olivier Rousteing to create the entire family's wardrobe. Each member wore different shades of nude, cream, and white, and furs were present throughout. Even North West had a baby white fur coat.

Now it appears that Kardashian swapped out that voluminous fur coat for a white faux-fur one.

Followers applauded Kardashian's switch in the comment section. "No more fur. Thank you Kim," one fan wrote. "I love that you aren’t supporting the fur industry anymore! That’s awesome!" another said.

Kardashian has been harassed by anti-fur activists many times in the past. In 2011, Kardashian was the target of a PETA billboard ad. Posted in the reality star’s hometown of Beverly Hills, the ad depicted a group of foxes and a photo of Kardashian. "Kim: These babies miss their mother. Is she on your back?" the ad asked.

In 2012, Kardashian was then attacked with a flour bomb while on a red carpet promoting her new perfume. It was believed that the protester was opposing Kardashian's love of fur.

“That probably is the craziest, unexpected, weird thing that ever happened to me,” Kardashian told E! News. “Like I said to my makeup artist, I wanted more powder and that’s a whole lot of translucent powder right there.”

TMZ reached out to PETA, which claimed that it was not part of the attack. But the organization said in its statement, "Whoever threw that flour may reach her when our polite appeals did not."

Then in 2015, at the reality star's Selfish book signing at N.Y.C., anti-fur activists showed up to protest Kardashian's love of furs. The activists chanted "murder" and held up signs that read “Your fur had a face" before security escorted them out. One protester even asked Kardashian, "Can you make it out to all animals that have been tortured?"

Since then, it appears that Kardashian has changed her mind and embraced the faux route. Her decision is in-line with a long list of fashion houses taking the same lead and swearing off fur in their collections. So far labels like Gucci, Chanel, Michael Kors, Prada, Versace and many more have taken an oath to only use faux-fur.

The first hint that Kardashian made the switch to faux could have been in May of 2018, after she attended a Cher concert in Las Vegas. She wore a pink faux-fur shawl over her Cher-inspired jumpsuit. According to W Magazine, when social media followers called her out for it, Kardashain answered "You guys, it’s faux fur.”

It looks like it's a dawn of a new era for Kardashian's wardrobe.