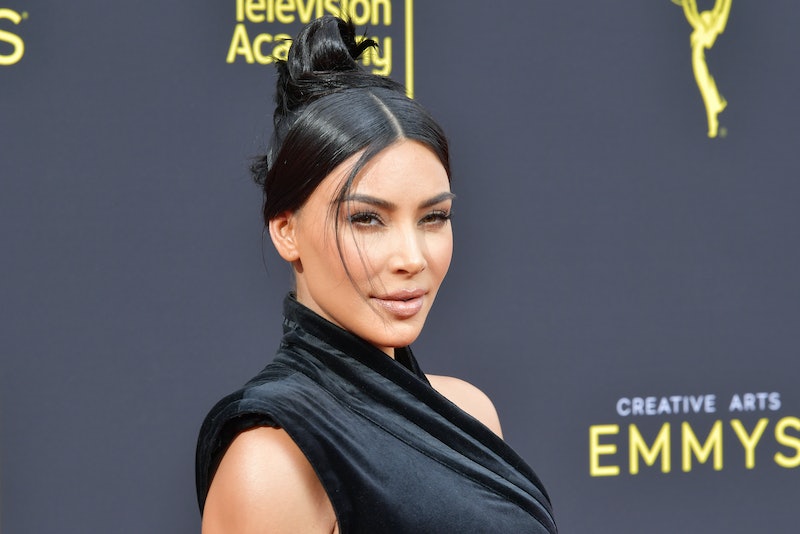 With the 16th anniversary of Robert Kardashian Sr.'s death approaching, Kim Kardashian shared notes she and her father wrote to each other in a series of Sept. 21 Instagram Stories. "My dad would always leave me notes when we lived together," the KKW Beauty founder captioned her first slide. Along with text overlay, she shared a handwritten letter from the famed attorney, who died on Sept. 30, 2003 at age 59 from esophageal cancer.

The note read: "I'm at [Beverly Hills restaurant Lawry's The Prime Rib] for Uncle Larry's birthday. I have my pager. I'll be home around 10 or 11. I love you. Daddy." In Kim's next Instagram story, she explained that her dad "saved every card I wrote him." Case in point: a 2002 Father's Day card, which the then-21-year-old Keeping Up with the Kardashians star inscribed as follows: "Dad — I just want you to know how much I appreciate everything you do for me. I love working for you! I love you and happy fathers day! ♡ Kimberly"

The final photo Kim shared was another Father's Day gift, though this one seemed to be from when she was much younger. Written in what appears to be pencil on lined paper attached to bright yellow paper, Kim simply wrote: "Happy Father's Day! Love, Kimberly"

On Sept. 8, Kim, again, kept her late dad's memory alive in another IG story — this time sharing one of Robert Sr.'s favorite Armenian dishes. "Any Armos eat lavash with scrambled eggs for dinner?" she captioned the photo, as seen in a screenshot captured by People. "This was my dads jam!!!!" Lavash is a Middle Eastern fire-baked flatbread, an Armenian staple.

Then, in the Sept. 19 episode of her friend Jonathan Cheban's new Foodgod: OMFG podcast, Kim made rare comments about an "emotional" encounter with her dad's longtime friend and most notorious client: O.J. Simpson. Robert Sr. was part of Simpson's defense team when the former NFL star was on trial for the 1994 murder of his former wife Nicole Brown Simpson and her friend Ronald Goldman. Simpson was acquitted in the killings but was found liable for them in a subsequent civil trial, per The New York Times.

"I think the last time I saw him was in Miami," Kim recalled on the podcast. "It was before he had gone to jail [in 2008]... I think me, Kourtney and Khloé were in Miami in a club — and we ran into him in the VIP section. We all, I think, all started crying, and it was emotional, I think."

Another way Robert Sr.'s legacy seems to have lived on through Kim is her current studies to be a lawyer — just like her dad. In a Vogue interview published in April 2019, Kim revealed that she'd begun a four-year law apprenticeship, with the goal of taking the bar in 2022.

Kim's interest in law may even have began while her dad was defending Simpson, as noted in her Vogue interview. “On the weekends they used our home as an office, with Johnnie Cochran and Bob Shapiro,” she told the magazine, referencing other famous members of Simpson's "Dream Team" of defense attorneys. "My dad had a library, and when you pushed on this wall there was this whole hidden closet room, with all of his O.J. evidence books. On weekends I would always snoop and look through. I was really nosy about the forensics."

Kim also rarely misses an opportunity to honor her dad with social media photos on noteworthy occasions, including Father's Day, his Feb. 22 birthday, as well as the Sept. 30 anniversary of his death. On the 13th anniversary of Robert. Sr.'s passing, in 2016 Kim even shared personal family home videos of her dad on her website.

While it remains to be seen how Kim will pay tribute to her dad again in the coming weeks, her recent memory sharing indicated that, though he may be gone, it seems that he has certainly not been forgotten.