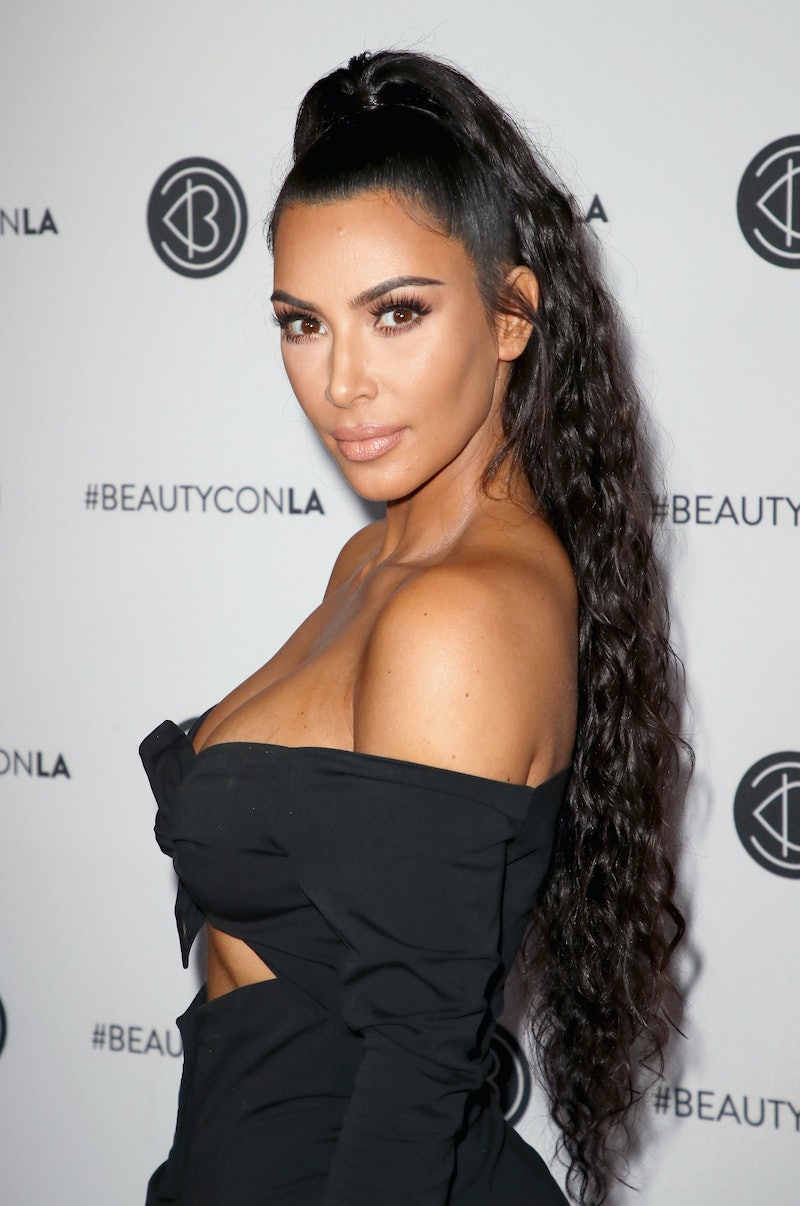 You know that saying, "Keep your eye on the prize"? It sounds like Kim Kardashian has been keeping an eye on hers for quite some time now. (Like, since the '90s, at least.) During the inaugural episode of Ashley Graham's new podcast, Kim K revealed she's wanted to be on a reality show ever since elementary school. And judging by the state of her current reality TV super-stardom, it seems safe to say Kim — as well as the rest of the Kar-Jenner crew — is living out that particular childhood dream to its fullest extent.

So, how exactly did Keeping Up With The Kardashians come to be then? As tends to be the case when it comes to most big-time accomplishments (like securing a successful, longstanding reality show deal, for example), it all started with a big dream. During an appearance on Tuesday's episode of Graham's new podcast Pretty Big Deal, Kim circled back to her earliest reality TV aspirations. She said,

"When I was, like, in elementary school, The Real World came on and I was like, 'That's what I want to do. I want to be on a reality show!'"

Fast-forward a few decades. Now, media-consuming folk across the globe know Kardashian's name, mostly courtesy of her family's wildly successful reality TV series, currently in its 15th season on the E! network. Kim's latest comments suggest that starring in KUWTK was, and is, an opportunity that she's personally always dreamed about. But during Tuesday's podcast episode, the reality star — and internet mogul to boot — told Graham that the same definitely could not be said for the rest of the Kardashian-Jenner clan. (Kourtney, in particular.)

"Everyone was like, 'OK, that's so stupid,'" Kim told Graham, remembering her family's less-than-enthused reaction when she first propositioned them with the reality show idea, way, way back in the day. Still, KUWTK's veteran audiences know that, personal feelings aside, the full-fledged Kar-Jenner crew did appear in the show's first season. And they would continue to appear (the vast majority of them, anyway) for some fifteen seasons to come.

So, uh, what happened? "I had to beg the whole family to be in it because they didn't even want to do it," Kim said, though she added that, once everyone was eventually on board, they were totally committed. "Even season one we were just like, 'Alright, let's give it our all,'" she finished. Suffice to say, 11 years of quality content later, fans of the show are probably exceedingly grateful Kim was able to convince them otherwise. Seriously, can you imagine if KUWTK was never a thing?

Per Kim's recent comments to Graham, it sounds like the Kar-Jenner clan is pretty grateful too. Plus — much like most of their enthusiastic fans, no doubt — they love indulging in a good ol' round of KUWTK reruns from the early days, too. "We have a family group chat that goes on every single day, every moment, and we'll send each other clips from, like, season one," Kim said, adding that looking back on the show's first few episodes usually tends to incite some giggles and some disbelief, especially given where the family is now.

But even more unbelievable (from fans' perspective, at least) is knowing that there was ever a possibility KUWTK might not actually come to fruition. That said, judging by the Kar-Jenner's massive pop cultural reach — on TV, in the press, and on social media — it seems pretty clear that a whole lot of people out there are thankful that it did. Perhaps they should direct a sizable chunk of those "thank yous" to little Kim and her big dreams.