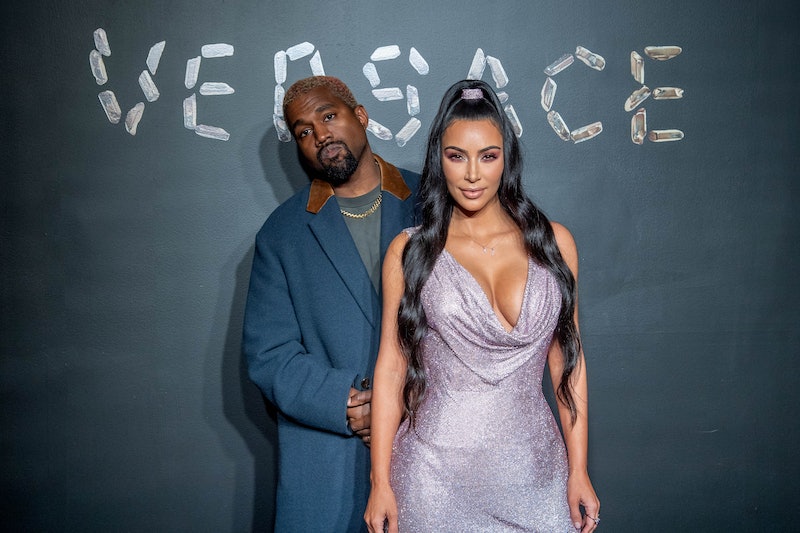 Time and time again, the Kardashians have proven that they know how to throw a party, and when it comes to the holidays every year, they go all out, and 2018 was no exception. And as for the photos from the event? They are all gorgeous, especially the ones featuring some of the youngest members of the famous family. Kim Kardashian's family Christmas photos truly showed off all three of her kids' personalities — and a rare sighting of dad Kanye West's huge grin.

In the photos, which were taken at the party that Kardashian and West threw at their home on Christmas Eve, the couple posed with North, Chicago, and Saint in front of a few different backdrops, including a decorated white wall, snow covered trees outside, and another that seems to be a tunnel covered in hundreds of lights. The entire family appears in each one, except for the last one, which is just Kardashian and West, pretending to sleep as they lean against one of her snowy decorations.

Kardashian didn't include much of a caption along with the photos beyond "Merry Christmas," but with pictures like these, no caption is needed. They all look so happy together... and just as glam as fans would expect from Kim's branch of the Kardashian family tree.

In each photo, all of Kardashian's kids seemed to be doing their own thing — and from what fans know about them so far, it wasn't surprising at all. North, wearing bright red lipstick, was all attitude in every picture, while Saint was mostly laughing and acting silly. And then, there was Chicago, in the middle of it all, looking happy and pretty entertained by what her siblings were doing.

And speaking of North's lipstick? Kardashian mentioned it on Twitter, saying that it might be one of her new products she'll be rolling out for KKW Beauty soon, so if you loved it, you might be able to steal her look. Is it any surprise that North is already a trendsetter?

In the hours before the party began, Kardashian was on Twitter, talking about how excited she was for everyone to see her set up. She tweeted:

"I wanna post what my backyard and whole house looks like but don’t want to ruin it for everyone coming! What should I do? Maybe post right before everyone comes?"

Ultimately, she ended up sharing videos of the winter wonderland she'd created in her backyard with her followers, and it looked like she truly outdid herself — and it was made all the more magical by the fact that she lives somewhere that doesn't typically get any snow at all.

Judging by the photos that have been shared of the event so far, fans should cross their fingers that the E! cameras were around for this so everyone can see all the details next season on Keeping Up With The Kardashians. And in the meantime, it's been so much fun to watch Kardashian's family grow, especially since Chicago was added to the group this year.