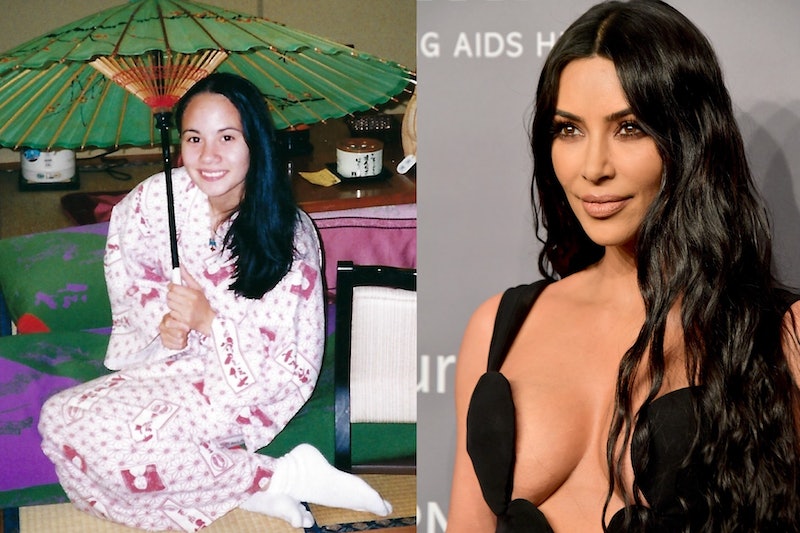 Kim Kardashian West is all about playing with her name — think: Kimoji perfume — when it comes to figuring out what to call her brands and product lines. But after announcing the name of her new solutionwear line on June 25, people took to social media to say that Kim Kardashian West’s “Kimono” line is cultural appropriation of the traditional Japanese garment, according to The New York Times. On July 1, Kardashian West announced in an Instagram post that she would be changing the name in response to the criticism.

"I am always listening, learning and growing — I so appreciate the passion and varied perspectives that people bring to me," Kardashian West wrote. "When I announced the name of my shapewear line, I did so with the best intentions in mind. My brands and products are built with inclusivity and diversity at their core and after careful thought and consideration, I will be launching my Solutionwear brand under a new name."

“[The name was meant to be] a nod to the beauty and detail that goes into a garment. [...] [I have no plans] to design or release any garments that would in any way resemble or dishonor the traditional garment. [...] My solutionwear brand is built with inclusivity and diversity at its core, and I’m incredibly proud of what’s to come. [...] I understand and have deep respect for the significance of the kimono in Japanese culture.”

But to me, if inclusivity and diversity were truly at the core of Kardashian West’s line, as she noted both on Instagram and in her original statement, then she wouldn’t have named it after an article of clothing that has such deep, cultural significance. As a Japanese American woman, I find Kim Kardashian West’s Kimono line disrespectful to the traditions I grew up with. Even if she didn't intend the name or line to be culturally appropriative, using the word "Kimono" to sell "solutionwear" inappropriately aligned my culture with a product made to make women feel like they need to fix their bodies, a message that is in complete opposition to the history and traditions of real kimonos.

Before Japan became Westernized, the kimono and related garb — the obi, haori, hakama, etc. — were daily attire in Japan. These pieces date back thousands of years to the Heian Period from 794-1185, according to Culture Trip. Today, Japanese people reserve kimonos for special occasions like weddings, New Year’s celebrations, tea ceremonies, Come of Age Day, and much more.

When I asked my mom, Yukie, who is native Japanese, what the cultural significance of kimonos are, she told me, “We [native Japanese people] don’t get to wear kimonos often; we only wear them for specific traditions. So when we do wear them, we are proud to wear them and feel Japanese when we do.”

Since I grew up in America, kimonos weren't a huge part of my upbringing, but they do strengthen my identity as a Japanese American person when I have the privilege of wearing them. As a child, I spent occasional summers in Japan at festivals wearing a cotton kimono called a yukata. My grandma, who used to make kimonos professionally, once chided me for buying a cheap yukata at the mall. She showed me the shoddy way the pattern lined up, and she told me she could have made me one that lined up perfectly. I learned later that training to make kimonos was a typical career path in Japan for women of my grandma’s generation. In that moment, I felt like I'd disappointed my grandma by buying some cheap thing from the mall.

Here in America, I often see over-sexed versions of kimonos in geisha costumes, or I see the word "kimono" applied to flowy cardigans that look nothing like the real thing. To this day, the kimono is still exoticized as a mystical, magical garment. And, don't get me wrong, the kimono is breathtakingly beautiful. But it is a beauty that deserves to be understood and respected, not treated like a costume.

For me and countless Japanese and Japanese American people, "kimono" isn't just a word. The garment is a piece of our histories and our identities that date back thousands of years. It’s fabric that weaves the stories of our families, of our ancestors who came before us and paved the way for us to be who we are today. When someone like Kardashian West, a white woman with significant socioeconomic power, takes the word “kimono” and applies it to something that has nothing to do with those traditions, it steals a part of us that runs deeper than words or language. That action says your cultural identity and traditions have no value; they are simply playthings that can be used and discarded at leisure. And isn’t that the crux of what cultural appropriation really is?

The controversy over the Kimono line is nothing new. The Kardashian family has long been accused of appropriating other cultures. Back in April 2019, Kim Kardashian West wore a maang tikka to a Sunday church service, which is traditionally worn by Indian women at their weddings, Business Insider reports. And in 2018, Kardashian West received backlash for appropriating Black and African cultures for wearing traditional West African Fulani braids and cornrows at two separate events, says Business Insider. (Kylie Jenner has also been slammed for wearing cornrows). According to BuzzFeed, Khloe Kardashian was criticized for wearing a traditional Native American headdress as a fashion piece, in a photo posted in 2014. These criticisms of the Kardashian-Jenner family are nothing new, but the fact that the family continues to take from marginalized cultures in 2019 is disappointing, even if it's not surprising.

While people of color are penalized, oppressed, and sometimes even murdered when they wear hairstyles, clothing, or jewelry that represents their cultures, the Kardashians have worn those cultures as fashion statements and costumes. Even worse, they are profiting off other culture's traditions and aesthetics while people of color are still struggling for a mainstream platform.

Though Kardashian West will now be changing the line’s name, the original hurt caused by her initial choice will reverberate among communities of color. And, unfortunately, the cycle of Kardashians profiting off people of color will simply continue unchecked, while people of color continue to struggle to be recognized and heard.

This piece was updated from its original version on July 1.