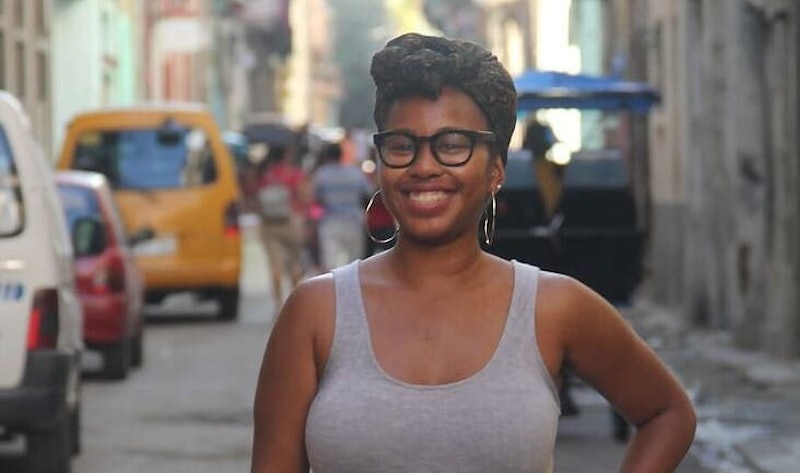 At first glance, I thought Emma Hallberg — one of the Instagram influencers accused of blackfishing back in November 2018 — was a light-skinned Black woman or mixed race. In one post, she wears a neon green bodycon dress — her curves, long, dark wavy hair, and acrylic nails in view — a clear take on the style Black women have spent decades creating. But the Swedish Instagram model and influencer self-identifies as white, as she told BuzzFeed in Nov. 2018. While the controversy around blackfishing — presenting on social media as mixed-race or black when one is not — has somewhat faded from view, the conditions that allow these influencers to tap on "hood" aesthetics demonstrate how society values our style and culture, but not the women behind it.

Growing up, getting a nameplate necklace, or name chain, felt like a right of passage for many Black and Brown girls like me who grew up in the Bronx. As a teen in New York City, at least one girl in your crew, if not all, rocked nameplate earrings, a name chain, a name ring, or Baby Phat or Rocawear jeans pulled up by a name belt. If you had all the above, it seemed you were equipped with the style essentials. My mom, who immigrated to the U.S. as a child from Honduras, had a name chain, too. I was overjoyed to finally get to place my cursive font, gold double-plated name chain with stones on my neck as a teen. I would later add a name ring to my small collection, and, whether I was heading across the street to the store or a party, wore each item with extreme pride.

Those are specific experiences that I equate with Black girlhood. The memories of 10-plus years of wearing bo bo’s on the tops and ends of my braids (then sporting a doobie or rollos once I began getting my hair straightened at the Dominican salon), buying cherry roll-on lipgloss from the beauty supply shop, and alternating between turning and jumping when playing double-dutch with friends are vivid. Those memories, among others, lay my foundation for Black womanhood.

I don’t often reflect on the other, non-nostalgic realizations that came early on: the ways in which Black girls are hypersexualized, how we’re disproportionately impacted by rape, sexual assault and street harassment; and how the very features we’ve historically been taught not to love — our thick lips, wide noses, and protective hairstyles — are revered on non-Black or fairer skinned women.

As a medium-brown skinned Afro-Latina, Honduran-American of Garifuna descent, I live at the intersection of several identities — often times being viewed as too much or not enough based on my ethnicities and race, depending on the space I occupy. Although my complexion and features immediately identify me as a Black woman, my last name, Martinez, and my Latin American roots make some people question my Blackness. Because Blackness is not a monolith, there are nuances, like nationality, culture, or socioeconomic background, to name a few, that impact our identity.

However, one thing is certain: Our beautiful, varying complexions are directly linked to our lived experiences. Because of colorism, this often means that darker-skinned people are treated far differently than those who are lighter-skinned. So, when blackfishers are trying on our style for likes, what I see is them overstepping the boundaries of appreciating Black style and culture; I see it as attempting to own and profit off our existence.

Hallberg told BuzzFeed in November that she only sees herself as white, then shared with her Instagram followers that she doesn’t believe she got paid opportunities because of her skin tone, but rather for her style and beauty looks. Alicja Brzotowska, a 20-year-old, London-based Instagram influencer, admitted to darkening her skin as a response to being called out in the original viral Twitter thread that called out the phenomenon, but told the BBC, “I don't feel like I need to stop doing something because... why would I stop doing something that's benefitting me or that I enjoy doing?"

By presenting as women of color, “racially” or “ethnically” ambiguous, these women are able to profit off Black aesthetics and genius without ever having to face or address the hard issues Black women face daily. They make it clear that this aesthetic provides them with financial opportunity, but it's never acknowledged how this behavior is supported by institutionalized ideas on race and gender — namely, that hood aesthetics are desirable for white women.

Unless trending, Black women's stories are rarely seen as an option for mainstream media coverage.

With society’s emphasis on Eurocentric beauty standards, it’s been a challenge for Black women to see themselves in media, or even find products designed with our hair and various tones in mind. It’s groundbreaking brands like Fashion Fair, Black Opal, and now Fenty Beauty that have pushed the beauty industry to be explicitly inclusive of women of color, particularly those with darker skin tones. It’s also vloggers and influencers like Monica Veloz, Jackie Aina, and Nyma Tang, who’ve all been vocal about the ways darker complexions are erased from the industry. These women have created their own lanes that hold brands accountable and ensure darker-skinned women know which products and tips and tricks work best for their tones. It’s been legacy magazines like ESSENCE and short-lived publications like Suede or Honey that have provided an outlet to celebrate the beauty and style of Black girls and women, as well as address topics you'd never see in “general market” glossies.

There have been strides made, but even after having one of the most iconic fall fashion cover season’s last September — Beyoncé on Vogue, Rihanna on British Vogue, Lupita Nyong’o on Porter, among the nine major covers starring Black women — former NBC talk show host Megyn Kelly defended blackface a month later. Unless trending, Black women's stories are rarely seen as an option for mainstream media coverage.

This phenomenon can be seen across intersections of identity, too. Early in my writing career, I was eager to share ideas on how to showcase the many facets of Latinidad for an outlet I grew up reading. While I’d ask questions and even made suggestions on how it could better bring the stories of Black women of Latin American descent to the forefront, the recommendations were ignored. It wasn’t until years later when advertisers and editorial took the time to acknowledge that sector of its readership — and understand our buying power — that it became a focus, and things began to shift. However, we still have a ways to go. Media, fashion, beauty, and now the influencer space are still structurally complicit in allowing non-Black women to profit off our humanity for clicks and checks.

Despite the desirability of our physical features, multifaceted culture, and buying power — Black consumers, mainly women, spent $54 million out of a total $63 million on hair and beauty products for women of color in 2017 according to Nielsen — centuries-old frameworks have allowed our earning power and bodies to be devalued. Instead, non-Black women can alter their bodies and flip their style for their benefit without giving credit where credit is due, or, alarmingly, avoid being a true ally to Black women. Being Black when convenient is not an experience afforded to Black women. Just as we’ve created safe spaces to love our entire selves, society has labeled us as moving targets.

Blackness isn’t a costume. During those defining, coming-of-age years, I learned that firsthand.

This article was originally published on Jan. 24, 2019